NASCAR: 2021 Contenders For The Cup – New Guard vs. Old Guard 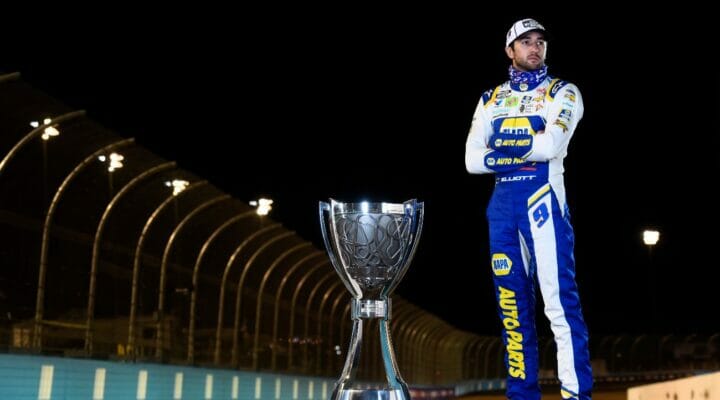 The question has been brought up before: Is a new guard in NASCAR going to supplant the old guard? And when is the transition going to happen, if it happens at all? What are the NASCAR odds that it happens beginning as soon as this February?

Up until last season, it was clear the old guard still owned NASCAR. Even with the retirement of so many big-name drivers, the sport was still owned by racers whose rookie seasons happened more than a decade ago. In some instances? It was two decades ago.

Chase Elliott’s NASCAR Cup championship in 2020 may have signaled a beginning of a transition. The 25-year old already has 11 series wins. That is already more than Clint Bowyer (10), a series veteran who just announced his retirement late last fall.

So is this the year the series could completely flip? Or is it just another step in the transition? Or was last year an anomaly with Elliott? Let’s take a look:

So who are these young whippersnappers who were born no later than the mid-1990s? Who are these drivers who have no concept of the world without the internet? Below are a few examples of competitors 25-years old and younger. They are listed youngest to oldest.

Justin Haley (1 career win) — In just his third career race at the Cup level, he won at Daytona in the 2019 summer race. He is slated to run full-time in 2021 after two part-time seasons.

William Byron (1 win) — He will be a full-time driver for the fourth straight year. Though he only has one career win to his credit, he has qualified for the Cup postseason the past two years and finished 11th and 14th. That’s not too shabby for a young driver. Byron also was the NASCAR Cup Rookie of the Year in 2018, and he has 11 combined wins in NASCAR’s other national series (Xfinity and trucks). This may be a true breakout season for the 23-year old.

Erik Jones (2 wins) — As he heads into his fifth full-time season before the age of 25, Jones seems like a driver who is about to bust loose. He has 62 career top-10 race finishes and has qualified for the postseason twice in four years.

Chase Elliott (11 wins) — The 2020 NASCAR Cup season champion, Elliott’s big statement last fall seemed to be a signal of things to come. This will be the sixth full-time season for the son of all-time great racer Bill Elliott. He has qualified for the NASCAR Cup postseason every year of his career. So what constitutes the “old guard,”anyway? Let’s go with drivers who are 35 and above, age-wise, and have won more races than Elliott. This, of course, leaves Joey Logano in a lonely place. At 30, he classifies neither as an old dude or a newbie. With 26 career wins and one series title (2018), Logano is straddling the fence of age classification.

Meanwhile, there’s a crop of seven “35-and-above” drivers who are slated to drive full-time in 2021. They’ve combined for 270 NASCAR Cup wins in their careers, along with six series titles. Maybe it’d be wise to be conservative and stick to the old guard when it comes to NASCAR race odds?

The “rocking chair is around the corner” NASCAR old guard is as follows. They are listed from youngest to oldest at 35 and above:

Kyle Busch (57 career wins, 2 NASCAR Cup titles): At 35 years old, he barely makes this list, but it seems like he’s been around forever. That’s because he was winning races when he was 20.

Brad Keselowski (34 wins, 1 title): He’s 36 (birthday is February 12), and like Kyle Busch, it is strange to put him in the “old guard” classification because he started — and had success — so young.

Martin Truex Jr. (27 wins, 1 title): He’s also 40 and came up through the ranks with Dale Earnhardt Incorporated. His journey has been unique, but he’s been a mainstay.

Kurt Busch (32 wins, 1 title): Kyle’s older brother is 42 and is the only full-time driver this year to have raced in the Daytona 500 in 2001 when Dale Earnhardt Sr. lost his life. He is the longest-tenured driver in NASCAR today.

Ryan Newman (18 wins): At 43, Newman earned a reputation more than 15 years ago as a racer who could light the NASCAR world on fire in qualifying and be a force in the race, too.

Kevin Harvick (58 wins, 1 title): The dean of this year’s group of full-time drivers, Harvick — 45 — replaced Earnhardt Sr. at Richard Childress Racing. In a story well known to NASCAR fans, Harvick got in Earnhardt’s car one week after the death — now nearly 20 years ago to the day. Three weeks later, the rookie won the first of his active-driver leading 58 career races.

At BetMGM, we have up-to-the-minute NASCAR betting odds, lines, and tips to ensure the best racing betting experience. Don’t miss an opportunity to bet on race lines, futures, and more at BetMGM.