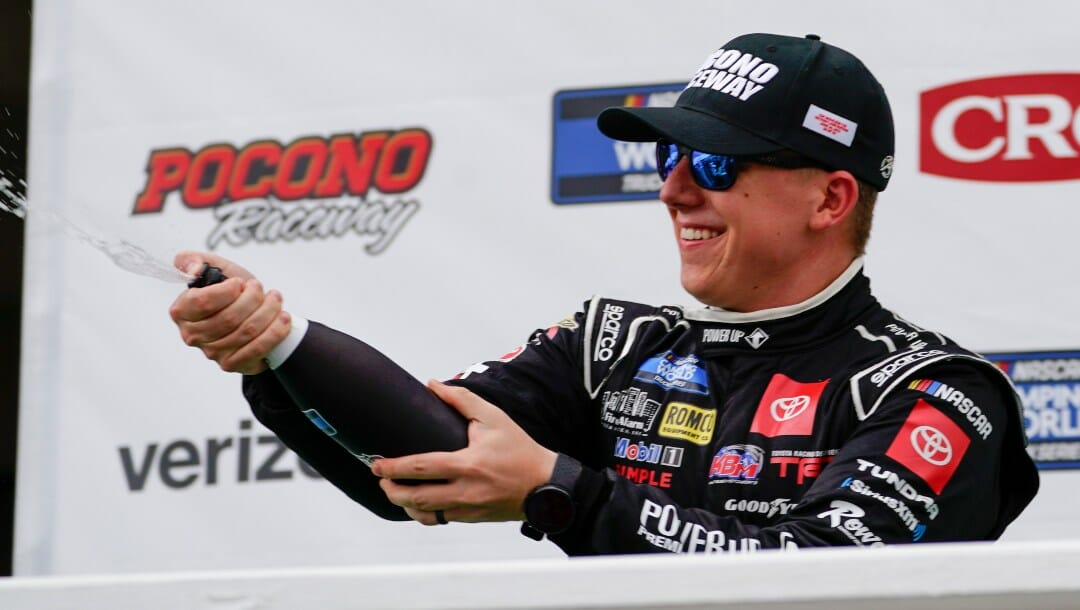 The Camping World Truck Series Round of 10 playoff begins Friday, with Gateway Speedway in Illinois serving as the opening-round host. The 1.25-mile oval has been hosting truck series races since 1998, with drivers like Greg Biffle, Kevin Harvick, Bubba Wallace, and more recent driving studs like Christopher Bell, Cole Custer and Ross Chastain winning there.

The Toyota 200 is the first of three competitions in this leg of the playoff, with Darlington and Bristol rounding things out. Then the field of 10 qualifiers gets pared down to eight drivers. After six lead-in races, the championship race will be Nov. 5 in Phoenix. So who are the NASCAR betting favorites to open things up?

He is only 24 years old, yet has run 39 races in the NASCAR Cup Series, 52 races in the Xfinity Series –- and as a truck-series driver for Kyle Busch Motorsports this year, he’s driving like a veteran.

It’s not even September and the younger Nemechek has already won five races, has nine top-five finishes and 12 top-10s in just 15 truck-series starts. He’s led 487 laps in the truck series this season and the next best this season has only led 165 (Chandler Smith, who is in the playoff, barely, at No. 9 out of 10).

If that doesn’t impress you maybe this will: Nemechek won the 2017 race at Gateway running for his dad’s team, and has two other top-10 finishes. His fourth-place finish for his dad in 2015 came when he was just 18 years old.

Nemechek is perfectly set up to win this season’s truck series championship. He starts No. 2 Friday night next to Hattori Racing Enterprises driver Austin Hill, the pole sitter.

It looks like a potentially strong situation for Nemechek, but nothing is guaranteed when it comes to the NASCAR odds.

So who could knock Nemechek off his pedestal? Well, the list isn’t lengthy by any means, but there are some good drivers. Sheldon Creed (+500) won last year’s race at Gateway and took seventh in 2019. He’s a good driver to start with when it comes to threats to Nemechek winning his sixth truck series race of 2021.

It may sound like a broken record, but nobody in the truck series field has run more races at Gateway than Matt Crafton. He has 17 starts at the venue. While he hasn’t won there, he’s posted nine top-10 finishes. Crafton is consistently strong there, but could he bust loose?

Consider this and shake your head a bit: Crafton’s first start at Gateway was 2001, and he took seventh place. Nemechek was four years old that year.

Another veteran who has always run well at Gateway is Johnny Sauter (+4000). Before last year’s 33rd-place finish due to vibration issues after 22 laps (of 160), Sauter finished in the top five in every one of the seven races he started here from 2009 to 2018.

You can always bet NASCAR online with BetMGM. We have up-to-the-minute NASCAR race odds. When it comes to lines and tips to ensure the best racing betting experience, don’t miss an opportunity to bet online and more when you visit us. Also, during any sporting event with BetMGM, you can enjoy live betting.