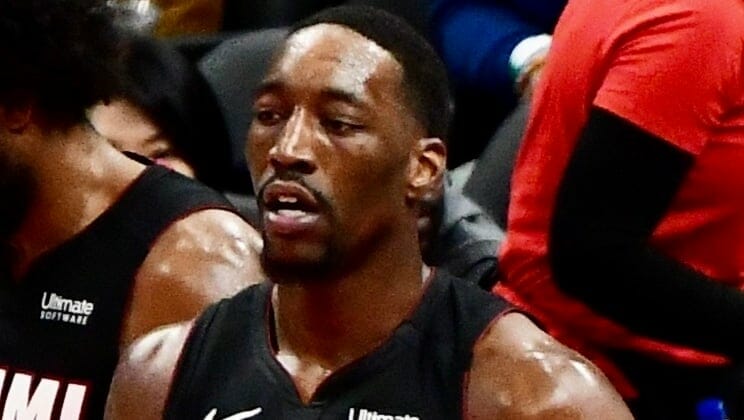 As no one rushed to contest a potential shot, Bam Adebayo waited patiently with the ball on the perimeter.

The Heat center, who has NBA Finals MVP odds of +2200, wasn’t much of a threat to shoot. But he was a menace to the 76ers in other ways.

As Philadelphia’s defense shuffled, Jimmy Butler noticed a clear lane to the hoop. When he cut, Adebayo darted a pass in his direction, creating an easy dunk.

In an age of big men like MVP frontrunners Nikola Jokic and Joel Embiid who can score from anywhere, even from deep, Adebayo stands out. But that doesn’t diminish his value to a title contender.

“There’s so many opinions about Bam and how he needs to play,” Heat head coach Erik Spoelstra said. “He has as many responsibilities for our team as Kyle (Lowry) does from the point guard position. Bam’s growth in terms of being able to manage all of these different responsibilities: playmaker, facilitator, attacker, finisher, catch-and-lob guy, offensive rebounder.

“OK you can check all those boxes, but reading the game and understanding what’s required for that possession, that’s where he’s shown the most growth and I think that was on display tonight, really the last two games as much as anything. He was able to really impact our offense from really all of those different areas.”

Did what we were supposed to do ☑️

The Eastern Conference top-seeded Heat play at No. 4 seed Philadelphia at 7 p.m. ET on Friday. The Heat lead the series 2-0.

The NBA betting line is -3.5 in favor of Miami, which is tied with the Celtics for the third-best NBA Finals odds at +450. The 76ers’ NBA championship odds of +6600 are tied with the Mavericks for last.

After vanquishing the Hawks in five games to advance, the Heat opened the Eastern Conference semifinals with a 106-92 win on Monday and a 119-103 victory on Wednesday.

In that most recent game, Adebayo provided a spark in a plethora of avenues. He paced the Heat with 23 points on 7-of-11 shooting to go with nine rebounds.

“I feel like just having tremendous energy and attacking the glass and just trying to get those easy baskets,” Adebayo said, “just providing all that effort for my teammates, just allowing me to be who I am.”

The @MiamiHEAT seek a 2-0 series lead Wednesday at 7:30pm/et on TNT. pic.twitter.com/rhQL3LgsUH

Adebayo has arguably been at his best during the postseason.

The fifth-year player out of Kentucky is fourth in net rating, seventh in defensive rating, ninth in player impact estimate, ninth in turnover percentage, 10th in rebounds and 14th in offensive rating during the playoffs.

Bam Adebayo does it all on defense, as tracked by #NBACourtOptix powered by Microsoft Azure!

During the regular season, Adebayo was 11th in player impact estimate. That’s ahead of the likes of Trae Young, Karl-Anthony Towns, Jayson Tatum, Stephen Curry and James Harden.

Butler claimed Adebayo was told by those outside of the team to score more if he serves as a facilitator too often or to create more plays for others if he scores too often.

That’s why, Butler pointed out, the team tells Adebayo to stick to his own identity as a player.

Bam Adebayo’s Impact on the Floor

Adebayo made his presence known from the very beginning of Wednesday’s clash.

Early in the first quarter, he set a screen for Butler on the right wing which led to an open jumper near the free-throw line, giving Miami its first points.

On the next offensive possession, Adebayo again set a screen for Butler near the same spot on the court. But this time, when Adebayo rolled to the rim and Butler drove to the paint, two defenders were lured to Butler. He pump-faked, then dumped the ball down to Adebayo at the block for a dunk.

Adebayo’s screens often created scoring chances for others on the Heat. That’s pivotal for an offense that thrives on dribble drives.

His rebounding is key as well. Late in the fourth quarter, Adebayo waited in the corner as Victor Oladipo drove to the rim. That’s something Adebayo is comfortable doing, as long as it ultimately leads to points.

But because the 76ers shifted their focus to Oladipo, Adebayo was open. He caught a pass and missed a layup. But his resolve remained.

He grabbed his own rebound. He pump-faked, causing defenders to leap into the air. He went back up for another shot, banked it off the glass and drew a foul.

Many of Adebayo’s points came from pick-and-rolls. When the 76ers paid too much attention to shooters like Tyler Herro or slashers like Butler, Adebayo capitalized.

In transition midway through the fourth quarter, Herro went to the hoop as Philadelphia defenders attempted to keep up. Adebayo patiently crept toward the paint, then picked up speed as he got closer. Herro lobbed a pass up, and Adebayo slammed it down for a 10-point advantage.

Thus far, Bam Adebayo has had his way with the 76ers big men in the series. pic.twitter.com/q4zBo5e7wl

Adebayo is more important than numbers.

On the next offensive sequence, Oladipo jacked up a shot, and Adebayo’s physicality down low would’ve led to an offensive rebound if the ball had bounced his way.

It didn’t. Instead, it ricocheted out to the perimeter and back to Oladipo. He then passed to Herro on the right wing. The guard consequently bolted toward the hoop.

As he did, Adebayo pinned Philadelphia’s Danny Green away from the basket, creating an opening. Herro passed up a layup but had room to locate and kick out to Max Strus for an open 3 in the left corner.

In regards to making plays for others, Butler said, “Bam’s always been like that.”

After the Game 2 win, Adebayo was asked what the key ingredient will be for the Heat to win a championship. He paused a moment, pondering.

“Keep sacrificing for one another,” he responded. “I feel like that’s the biggest thing is stay connected. I feel like when we’re all together, we’re going through adversity, that’s when it brings out your true character.”