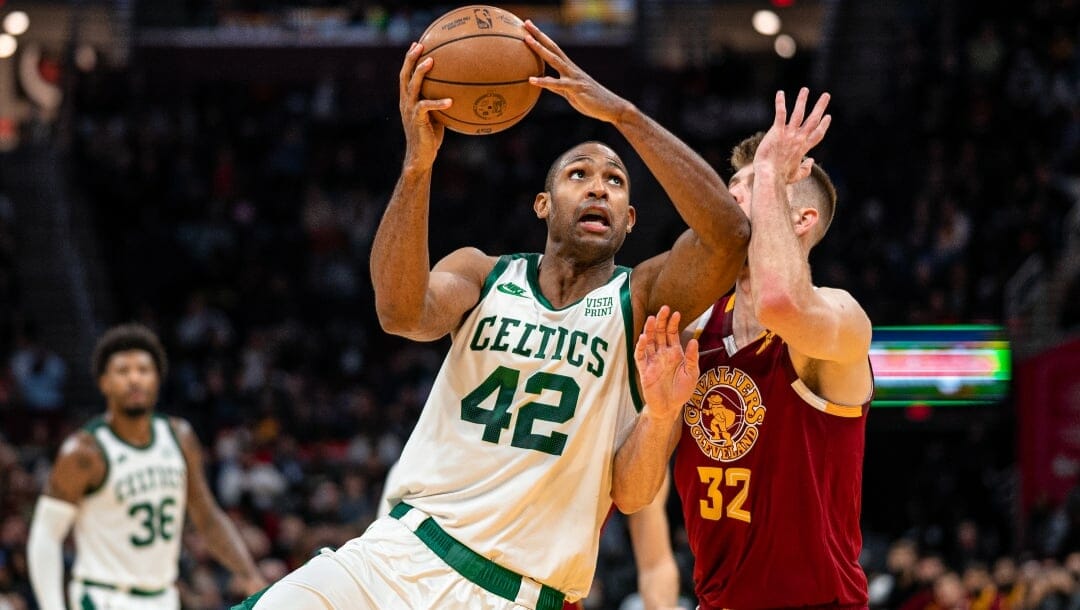 With Jayson Tatum sidelined due to foul trouble, Boston’s hopes seemed to be in danger.

But the lead for the Celtics, who have NBA Finals odds of +200, in a decisive Game 7 of an Eastern Conference semifinal game didn’t dissipate. It swelled.

Midway through the third quarter, Jaylen Brown located Marcus Smart on a cut from the left wing to the hoop. When Bucks defenders swarmed him, Smart kicked out to Grant Williams in the right corner for a wide-open 3-pointer, his fifth of the game, for a 13-point lead.

Less than three minutes later, the Celtics furiously moved the ball around the perimeter until Al Horford held it at the top of the key.

With a pump fake and drive, the Bucks gathered to stop him. Horford used that to his advantage and dumped the ball off to Williams for an easy two-handed dunk.

When one of Boston’s stars is off the floor, others on the team have managed to rise to the moment on offense. With a stout defense, this has been crucial in its championship quest.

“I’ve said quite a few times: We don’t rely on one guy,” Celtics head coach Ime Udoka said. “Even though we understand who our main scores are, we kind of spread it around, equal opportunity. We want to have that balance, and it affords everybody the opportunity to kind of step up and shine on certain nights, whoever’s chance it is.

“We lean on Jayson and Jaylen to do what they do on a night-to-night basis and get contributions from everybody else. I think that’s what makes us harder to guard than focusing on one guy.”

The Heat host the Celtics at 8:30 p.m. ET on Tuesday in Game 1 of the Eastern Conference Finals. The Heat, who have the third-best NBA championship odds at +425, have an NBA betting line of -1.5.

The Heat beat the Hawks in five games to open the playoffs. Then they toppled the 76ers in six. Jimmy Butler led them in scoring in their last four outings to lead to this point.

“They have a lot of toughness on their team, and they shoot the ball well,” Williams said. “So we’ll have to be able to lock in and focus on our game plan.”

The @celtics win Game 7 and advance to the Eastern Conference Finals led by the hot three-point shooting of Grant Williams! #BleedGreen

The Celtics swept the Nets in the opening round of the postseason before surviving a seven-game slugfest against Milwaukee. The Celtics fell behind 3-2 after Game 5, but they responded with two double-digit victories to survive.

“It was a great feeling,” Tatum said. “Tonight was an extreme team effort. I couldn’t be more proud of the way we responded and how we played to get this win.”

Late in the second quarter, Smart brought the ball up as Williams set a screen before moving out left. Daniel Theis set an off-ball screen for Williams, which gave him enough space to catch a pass and shoot a 3.

In an early back-and-forth battle, this provided the Celtics with a narrow lead.

Williams went on to finish the game 7 for 18 from deep for a career-high 27 points. The 6-foot-6 power forward tied a playoff Game 7 record for made 3s, tied with Stephen Curry and Marcus Morris.

“Each one as time went on I got more comfortable, kept shooting,” Williams said. “It was fun, but it was great that we got to win.”

Williams, a third-year player out of Tennessee, felt it was a culmination of his toil to improve his shooting out of college.

After Tatum and Brown took their turns pacing the Celtics offensively, the Bucks dedicated a great deal of attention to them. This left Williams more opportunities to capitalize on.

“It was just a matter of that’s how they want to play it,” Williams said. “I’ve worked on my shot enough to be able to knock those down, to be confident enough to show it.”

Grant Williams was HUGE in the @celtics Game 7 win! #BleedGreen

Williams missed 5 of his first 7 3-point attempts. But Udoka and his teammates continued to tell him to “let it fly.”

Udoka felt the Bucks were “disrespecting” Williams by how they guarded him. Like the emphasis was for the entire series, especially in the last three games, Williams underscored the focus on remaining consistent.

Williams ended up 10-for-22 shooting to go with six rebounds and two blocks. But Tatum felt he could’ve taken 30 shots.

“Grant played great tonight. He took more shots than anybody on the team. I think that’s a first. … I told him don’t get used to that,” Tatum said with a smile. “You need guys coming off the bench to be a star in that role, and Grant won us a playoff game tonight in Game 7. I’m extremely happy for him.”

Celtics Get Points From Anywhere

Aside from Williams, the Celtics’ perimeter shooting was a clear strength in the closing matchup with the Bucks.

Tatum was 5-for-9 shooting from 3, while Brown was 2-for-5. On several occasions, those two executed brilliantly while playing off of each other.

Eight Celtics made at least one 3-pointer.

Udoka felt Game 5 was a reminder of the struggles the Celtics faced early in the season. He believes they “definitely” gained more confidence in each other as the season progressed.

“There were indicators of how close we were,” Udoka said. “We made it harder than we had to, but it’d be sweeter if we go this route and I think it will boost our confidence going forward.”

Even when Williams and the Celtics struggled early on offense, they knew their defensive effort would keep the contest close.

But as the Celtics kept attacking, kept moving the ball around the perimeter, they found their open shots.

“It’s a team sport,” Tatum said. “On different nights it’s going to be different guys, and everybody has to step up to contribute to winning.”

The Celtics’ depth goes beyond their scoring.

Robert Williams III, a Defensive Player of the Year candidate, was limited due to injury. While he could’ve been available in an emergency, Udoka felt Boston was fine with its big-man rotation that included Horford and Theis.

This was also crucial when Tatum was in foul trouble. But he was thrilled, albeit on the bench, as Boston maintained its cohesive performance and piled onto the lead until Game 7 was out of hand.

It allowed others like Williams the chance to shine, after all. And he had to admit, he felt a record was special.

“That was pretty cool to be kind of happy about, and I guess I have to forget about it,” Williams said. “We’ve got to get ready for the Heat.”