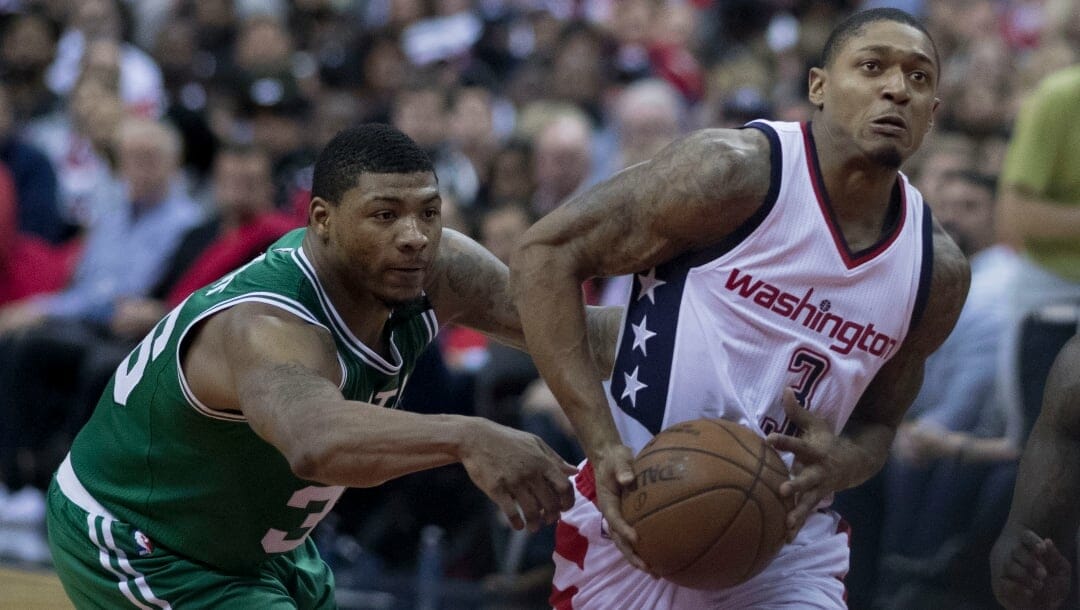 Kyrie Irving had been torching the Boston Celtics, his former team, rendering their greatest strength useless.

Until when it mattered most, that is.

The No. 2-seeded Celtics, who have the fourth-best NBA Finals odds of +800, were trailing by a point at home in Game 1 of a first-round playoff series. The Brooklyn Nets, thanks to Irving’s 39 points, were in control.

With 30 seconds remaining, Irving held the ball near midcourt, watching time drain away. Boston guard, and former teammate, Marcus Smart stood before him.

Smart, one of the best defenders in the league, wasn’t enough though. Irving had been hitting shots over him. Al Horford swarmed in as well, which eventually caused Irving to kick the ball out.

The Celtics forced Kevin Durant into a missed 3-pointer. They rebounded and rushed down the court. Jayson Tatum ended the contest with a buzzer-beating layup.

“I saw the shot clock and just tried to make it tough on him,” Tatum said of defending Durant. “That was a great defensive possession for the team. Everybody was communicating, and we finished it off with a box out and a rebound and we pushed the ball.”

The Celtics contain the dribble drive at each turn and force a contested shot.

No timeout. JB drives, sees two defenders and kicks out to Marcus Smart. Smart fakes and understands he’s playing 5 on 3 and finds Tatum cutting for the #TissotBuzzerBeater.pic.twitter.com/c9CU2akJ4Y

A game-winning possession borne out of defense.

This one sequence highlights why the Celtics are capable of defeating the high-powered Nets. With Durant and Irving on the floor together for the entire series, that is enough to win against many teams.

But not the Celtics. Not this time.

“We know they have two elite scores,” Celtics head coach Ime Udoka said of the Nets. “They made some tough shots. We made some mistakes that allowed them to get some of those shots, and so we’ve got to clean that up.

“But for us, I think it’s kind of a microcosm of our season.”

Boston earned the second spot in the Eastern Conference standings despite beginning the season 16-19. The Celtics never lost three games in a row after that point, going 35-12 to end the regular season.

Tatum takes it away from Bruce Brown and Al Horford finishes on the other end. Brooklyn has seven turnovers with just under three minutes to go in the first quarter.

Beating the Nets, Smart said, was fulfilling considering how Boston had performed before. The Celtics weren’t overly successful in close games, so Sunday’s might’ve been one they dropped had they not developed holistically.

“The resilience that we have, the approach that we have and the work that we put in to make sure that that doesn’t happen and just learning,” Smart said. “Unfortunately we had a lot of games to learn from those types of incidents, so we just wanted to make sure that that’s not how we went out and everybody did their jobs and we did the best that we could do and everybody helped one another and we came out with a victory.”

The Celtics were capable of that turnaround in large part because of their defense.

They were No. 1 in the league in defensive rating over the course of the regular season. They allowed an NBA-low 104.5 points per game. That helped them earn the second-best net rating behind only the Phoenix Suns.

“That’s what we really take pride in as a team is defense,” Tatum said. “We feel like our mentality is defense first. … Whoever’s on the court, whether it’s guys off the bench or guys who started, everybody takes pride on that side of the ball.”

That was led by not one but two Defensive Player of the Year candidates.

Robert Williams III was among the frontrunners for the award. He was in the top 20 in the league in individual defensive rating during the regular season, but a knee injury held him out for the final stretch.

Smart, however, did win the award. He had the leading NBA odds at -190.

However, those two weren’t the only defensive stalwarts for the Celtics. Tatum, Horford and Jaylen Brown were in the top 25 in the league for defensive rating.

Tatum said Smart establishes the defensive tone. Everyone else on the team simply tries to keep up with him.

“I think my defense and my game speak for itself,” Smart said about the potential of earning the award before winning it, “but I’m really focused on this next game we’ve got on Wednesday. It would be an honor to win it. It’s an honor to be mentioned, but I’m playing for something bigger and right now my focus actually is on the next game.”

Boston players stressed the importance of not guarding Irving or Durant one-on-one. Stopping them, or at the very least limiting them, is a collective effort. So helping off the ball is pivotal.

However, the Celtics added, they need to take pride in their abilities whenever a situation forces them to defend one of them with only one player.

That happened on Brooklyn’s final offensive possession. The Celtics refused to give Irving an open look, therefore they double-teamed him.

This left Durant isolated with Tatum, who forced a fadeaway 3-pointer.

“Tried not to give him any good, clean, easy looks,” Tatum said. “That’s all you can ask for.”

The Celtics’ physicality kept him out of rhythm.

“Everything that he gets, he has to work for and is as hard as it can be,” Smart said. “The dude is 7-foot with a shot like that, I mean it’s hard to really stop him. But like I said, you just have to make it as hard and tough the whole game as you can and just give him different looks and that’s what we did tonight.”

The Celtics’ defensive prowess is also emblematic of their mentality.

When the Celtics were failing early, they didn’t pull out narrow contests. Two of their first four losses were in double overtime.

But that’s changed, and their mental fortitude has improved.

The Celtics led by as many as 15 points midway through the third quarter. That advantage eventually dissipated, though, as the Nets gained a five-point edge with 5:30 left.

The Celtics were heated in some of their communication. But they believe that’s a sign of faith in each other, as they’re willing to express themselves with the goal of improving.

So about last night… pic.twitter.com/AuCzN1Srxj

Smart noted their chemistry encourages trust. And that translates to the defensive end. Their ensuing corrections illustrated the growth they’ve made this year.

The Nets scored merely seven points in the final five minutes. The Celtics, meanwhile, totaled 13. That included the final two as time expired.

“Those are the best games, the games that are the most rewarding, the most fun, just as a competitor,” Tatum said. “I think in those last three minutes the only thing you’ve got to do is just try to figure out how to play as hard as you can, make the right play, compete and figure it out.

“And when you do that and you win a game like that, it feels good. It feels really good.”