Charlotte Hornets Are Both Dangerous and Vulnerable 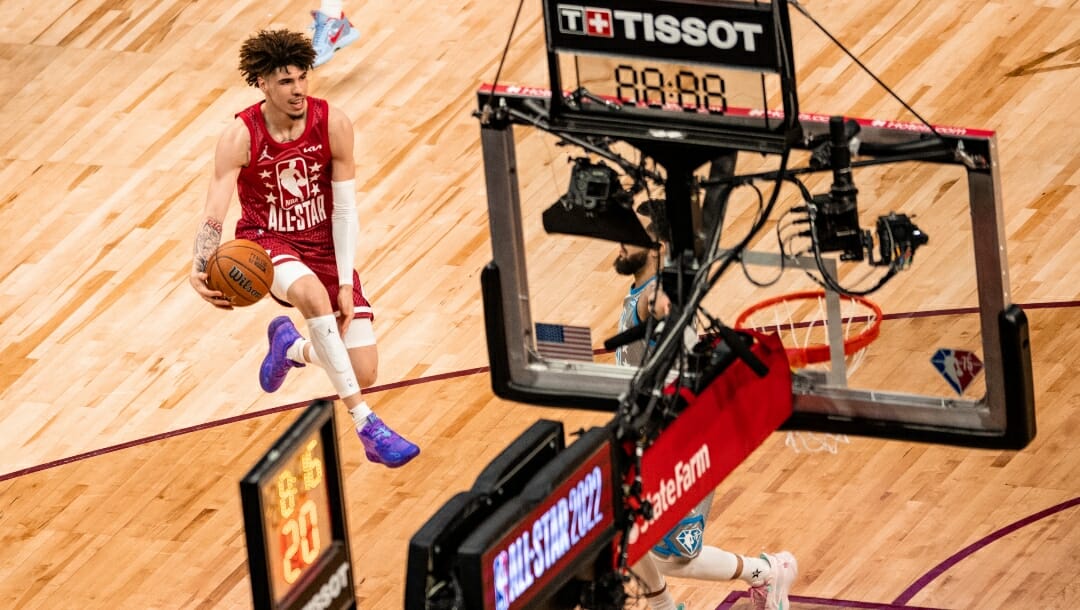 When opponents diverted their attention to him, LaMelo Ball gave the ball up.

The Charlotte Hornets, who have NBA Finals odds of +40000, were trailing the Wizards midway through the first quarter Sunday. The Hornets sought to end their regular season with three consecutive victories.

Ball dribbled up the right side of the court, then passed off to Mason Plumlee at the top of the key. Plumlee pitched back when Ball ran behind him. As Ball drove, Plumlee slipped to the hoop.

The scoring threat Ball is, two Wizards paid attention to him. But Ball is more dynamic than someone who constantly looks to score.

He lobbed a pass up to Plumlee for a two-handed jam.

The Hornets are performing thrillingly leading up to the postseason.

The Charlotte Hornets are the only franchise in the NBA with three players in the top 25 of 3 pointers made.

The Hornets play at Atlanta at 7 p.m. ET on Wednesday in a play-in tournament game. The NBA betting lines have the Hornets as a 5.5-point favorite.

The Hornets (43-39) were the 10th team in the Eastern Conference standings and the Hawks (43-39) were ninth. While the loser is eliminated, the winner will play at Cleveland for a right to become the eighth seed on Friday.

Both teams are entering this matchup on hot streaks.

The Hawks, who have NBA Championship odds of +15000, have won seven of their last 10 games. Meanwhile, the Hornets went 11-4 to close the regular season including a final three-victory stretch.

Hornets’ Defense Setting Them Back

The Hornets have a glaring weakness on the defensive end of the floor.

They are 22nd in the league in defensive rating. They allow the sixth-most points (114.9) per game.

Even in their win over the Wizards, this was clear. Bringing a lineup with virtually no star power, they often capitalized on easy clearance into the lane.

The Hawks are even more talented. Atlanta is the NBA’s second-best team via offensive rating.

Trae Young, who flourished in the playoffs last season, is sixth in the league in scoring (28.4 points per game) and third in assists (9.7 per outing).

Defending Young and the rest of the Hawks, with so much at stake, will be no easy task.

Scoring ✔️
Facilitating ✔️@TheTraeYoung filled up the stat sheet in a big way this season!

But the Hawks, who are 26th in defensive rating, have issues of their own.

The Hornets scored the fourth-most points during the regular season, just 0.6 behind the lead of the Timberwolves. They’re eighth in offensive rating and seventh in effective field goal percentage.

This is all possible due to blistering ball movement. The Hornets are fourth in the NBA in pace and second in assist ratio.

These strengths were illustrated in the Wizards game. They constantly scored thanks to superb ball movement, instigated by backdoor cuts and action off the ball.

They were consistently looking for the next pass or an open shot. They also made the most of fast-break opportunities.

Ball is often the initiator of those.

Aside from his scoring prowess, he leads the league in loose balls recovered and is ninth in deflections per game. He’s also eighth in assist percentage, meaning he uses extra possessions to create offensive chances for his teammates.

While Miles Bridges leads Charlotte in scoring (20.2 points per game), Ball is first in assists (7.6 per game) and steals (1.6 per contest). While scoring 20.1 points per outing, he facilitated an offense that features seven players who average double-figure scoring.

Against the Wizards, Ball threw out to Bridges near midcourt. He then dribbled to the left wing and found Terry Rozier with a behind-the-back pass in the corner. Rozier pump-faked, leading to a defender whizzing by, then cashed a 3 for a 20-point lead.

The Hornets are balanced and explosive offensively. The question is if their defense can withstand another offense of a similar caliber.