Jaylen Brown Is More Than a Complementary Player 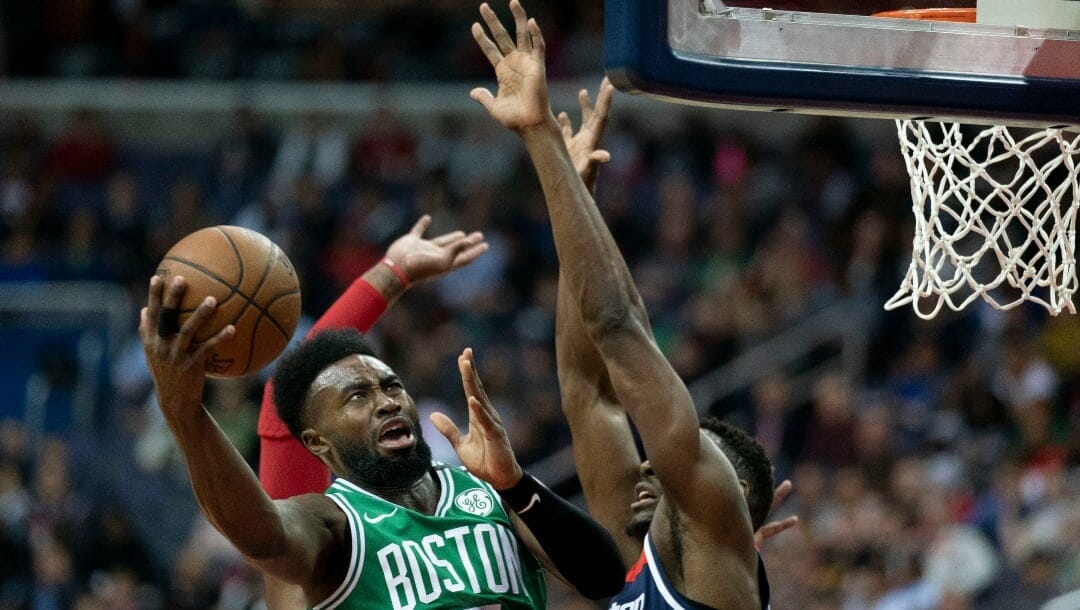 Jaylen Brown crossed over between his legs, drove toward the hoop, then made one of the highlights of the night.

The Celtics guard, who has NBA Finals MVP odds of +2000, crossed over in front of the Bucks’ Grayson Allen and pulled back. Allen fell backward, leaving Brown with an easy jumper from the elbow.

Brown provided Boston its first points of the game on a mid-range jump shot, sparking a tone-setting run. He converted on kick-out 3-pointers. He hit shots from deep off of screens.

Brown was a cog in the Celtics’ offensive machine that thrived on effective ball movement and set a franchise record in the process. But with a game-best scoring output, he proved he was much more than that as well.

“I was just hooping to be honest,” Brown said. “I was just being aggressive. That was it.”

The Celtics play at Milwaukee at 3:30 p.m. ET on Saturday. The Eastern Conference semifinal series is tied at 1-1.

The NBA betting line for that game is -2.5 in favor of the Bucks, who have the fifth-best NBA championship odds at +600 while the Celtics are third at +450.

The Bucks stole a win and home-court advantage at Boston, 101-89, to open the series. Brown totaled a below-average 12 points on 4-for-13 shooting.

the @celtics set a franchise record for three-pointers made in a playoff game with 20 threes in their Game 2 victory! #BleedGreen

“You learn from it. You move forward,” Brown said. “Milwaukee kind of punched us in the mouth in Game 1. Just wasn’t as prepared as we should have been as a unit, and today was a different story.”

“For Jaylen, he’s always someone that’s going to bounce back and play well,” Udoka said. “He’s traditionally done that when he’s had a bad game.”

Brown recognized the urgency of the postseason. He’s only been on Boston teams that have seen campaigns end short of a championship.

Brown illustrated a focus after his disappointing performance indicative of a will to hoist the Larry O’Brien Trophy. Celtics teammate Grant Williams noted Brown was in TD Garden hours before tip-off to fine-tune his game.

“He came in locked in,” Williams said. “I saw it in his eyes. So at the start of the game I was just like, ‘Alright, do your thing.’ And we were supporting and cheering and he established that tone, set that mark of aggression on the offensive end, not only playing the right way, knocking down open shots, but also moving it.

“And it’s one of those things that he’s improved on throughout his career and you have to admire that about him that he’s continued to get better.”

That’s how you bounce back ✅ pic.twitter.com/WZAiyIZnlx

The Celtics have reason to believe they can contend for a title this year. One being how they hamper others from scoring, as they led the league in defensive rating during the regular season.

Another is their balance. Jayson Tatum is unquestionably their go-to scorer, but the Celtics don’t need to solely rely on him. That was evident Tuesday.

Brown refused to let the Celtics lose at home again. He felt they needed to perform like their season was on the line, and they did by increasing their physicality and assertiveness.

“Just being aggressive,” Brown said. “We can’t let one game dictate how this series is going to go. We’re going to have to come out and be aggressive from the gate and take what the defense gives us and make them respond from there.”

Brown, for the most part, has thrived lately. In Boston’s last 10 games, he averaged 26.6 points, 6.2 rebounds, five assists and 1.2 steals per game. Those are all increases from his regular season mean.

“JB was locked in from last game, locked in from shootaround,” Tatum said after Boston’s most recent triumph. “If I was a betting man, I would bet that JB was going to have a great game, and he set the tone. And that was big for us to see how aggressive he was coming out, making the right plays for himself and for others. He kind of got us going tonight.”

The Celtics began the season 16-19, yet went on to earn the No. 2 seed out of the Eastern Conference. Resiliency has been a common theme for this squad.

Brown viewed his Game 1 performance, and that of his team, as no different. Channeling that perseverance was going to be pivotal.

Arriving at his home arena early, Brown noted, was part of his mental and physical preparation. Visualizing how the approaching contest could transpire, he geared up for the task at hand.

Brown said he’s mustered “everything” to remain prepared, adding the rest of his life is on pause. The playoffs are all that matters.

“That’s what it takes,” he said, to get ready for a series he anticipates will “get really grimy and dirty and nasty.”

Even while battling a nagging hamstring ailment, Brown said he would be ready for Game 3.

“Getting accustomed to losing isn’t something we want to do,” Brown said. “How you respond is everything, and what you’re made of comes to light in those moments. So you got to see what the Celtics are about.”