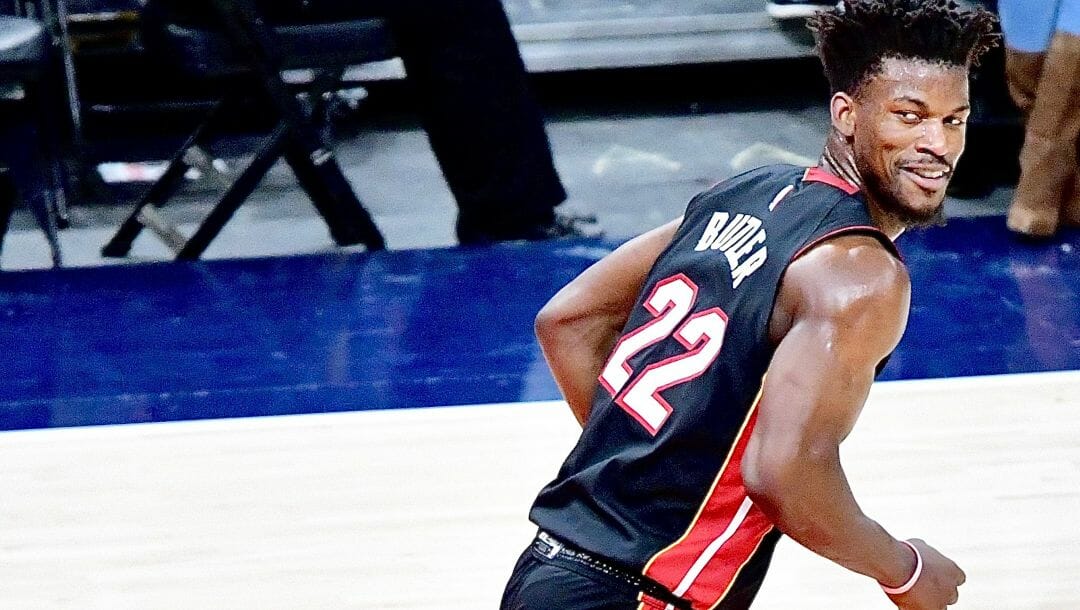 Jimmy Butler barreled toward the hoop and, despite being one of the most brilliant scorers in the NBA, looked to pass.

The Miami Heat, who have the fifth-best NBA Finals odds at +900, were leading the Atlanta Hawks in Game 1 of a first-round playoff series on Sunday. And the Heat weren’t content with that advantage.

Early in the second quarter, Butler received a handoff from Dewayne Dedmon near the left wing. The center cleared out, opening up space for Butler to operate.

When the forward began dribbling, he conceivably could have begun looking for his shot. Two Hawks closed in on him, after all. But he bounced a pass back to Dedmon in the lane, and with one step he rose up for a short jumper and made it.

As the ball fell, an ensuing whistle signaled a foul, as the Heat’s lead swelled to double digits, Butler pumped his fist. His team inching toward an elusive title, whether he’s scoring or not, was his desire.

Butler’s fire is fueling a Heat team on a hot streak.

“It’s not going to go your way every night. We accept that, we know that,” Butler said. “But we can be the harder-playing team. We can be a team full of dogs, and I think that’s what we’re going to have to hang our hat on.”

The Heat gained an advantage with a 115-91 win in the series opener. Duncan Robinson led Miami off the bench with 27 points while making 8 of 9 3-pointers.

Butler, who has the eighth-best NBA Finals MVP odds of +1800, added 21 points, six rebounds, four assists and three steals. His well-rounded contribution was critical to his team’s victory.

Jimmy Butler Efficient on Both Ends

Butler established the tone for his team in the playoffs.

The Hawks were fresh off two wins in the NBA Play-In Tournament, and their opponents refused to let that momentum translate.

With a hand in his face, Butler cashed a 3-pointer from the right wing to give the Heat their first points. Then, for the rest of the night, he went on to create offensive chances for himself and others on drives. He was active off the ball with cuts. He made extra passes for open 3s.

In his six-time All-Star career, Butler has proven he can score at a high clip. He can also successfully defend the most potent scorers in the world in critical situations.

For example, he helped the Heat hold star Trae Young to a season-low eight points.

“He is an electrifyingly-unique player,” Heat head coach Erik Spoelstra said. “You’re a little on edge, and that’s born out of respect.”

Jimmy Butler sends it away 🚫

It's a tie game with 1:23 to play on NBA League Pass: https://t.co/L8Rrlv9ZoR pic.twitter.com/WjpeHywz3O

After the game, Butler emphasized he’s willing to take on added responsibilities in the playoffs. And he impacts a game in so many ways.

Butler is also 11th in assist/turnover ratio. This indicates his value of each possession and his willingness to let teammates convert those into points.

Spoelstra pointed out many NBA players say stats are meaningless to them, but then they act differently. Butler is not one of those cases.

The Heat’s roster is loaded with individuals who can cause havoc for opponents. But unselfishness is required, Spoelstra said, to capitalize on that.

“That’s how our locker room is from top to bottom,” Heat point guard Kyle Lowry said. “Everyone wants everyone to be successful, and I think that helps continue to build trust in each other, camaraderie in each other. It’s just one of those things where we just want to win and it doesn’t matter how it comes.”

But Butler can still score, too.

Late in the third quarter when the Heat were already up 84-58, Butler drove on a pick and roll with Dedmon, then handed the ball to Gabe Vincent. The Miami guard dribbled across the court, attracting two defenders.

Butler slipped to the hoop. Vincent found him for an alley-oop dunk.

Jimmy Butler throws down the and-1 alley-oop 😤 pic.twitter.com/zlKVmP28QY

Jimmy Butler Hungry for a Championship

Spoelstra underscored the Heat’s respect for the Hawks.

It didn’t matter if the Heat had earned the Eastern Conference’s top seed with a 53-29 record in the regular season. It didn’t matter they were 3-1 against the Hawks this year.

The Heat need to keep their urgency up, Spoelstra noted, even if they thrived defensively to open the series. And that shouldn’t be a problem for Butler.

The Heat’s veterans comprehend each postseason game —  its nuances, its challenges — is different. And Miami’s roster is loaded with experience.

Lowry and PJ Tucker, for example, are two starters who have won titles for other franchises. Butler, too, understands that. But he’s craving to win his first championship.

That entails not looking too far ahead. Butler has played, and lost, at a wide range of points in the playoffs. He recognizes the focus demanded of him.

Butler’s effort was on display when he attempted to will the Heat to a championship in 2020, in the NBA’s bubble. But he was short, which could have further exacerbated his yearning for a title of his own.

“Honestly we don’t think about the past, we’re just worried about today,” Butler said after defeating Atlanta. “We enjoy this win, and then when midnight hits, we forget about this one and then we get ready for the next one. We get ready to get better come tomorrow and we just look forward.”

Butler was asked how he spends time between playoff games.

It consists of plenty of film and communicating with teammates to find how he can improve and what they as a team can work on.

An introspective mindset, Butler said, is the key to consistency at this point. The Heat need to worry about themselves before their opponent.

“We’ve got a long way to go,” Butler said. “Back to the drawing board, trying to figure out how we can do it again.”

As long as Butler is on the floor, the Heat will have a good chance to win again.

From the preseason through the NBA Finals, live sports betting is available for all NBA odds at the sportsbook.

A unique opportunity to place bets in the middle of a game, NBA live betting allows you to place a new bet, hedge against a futures bet, or increase your position on a pregame bet.