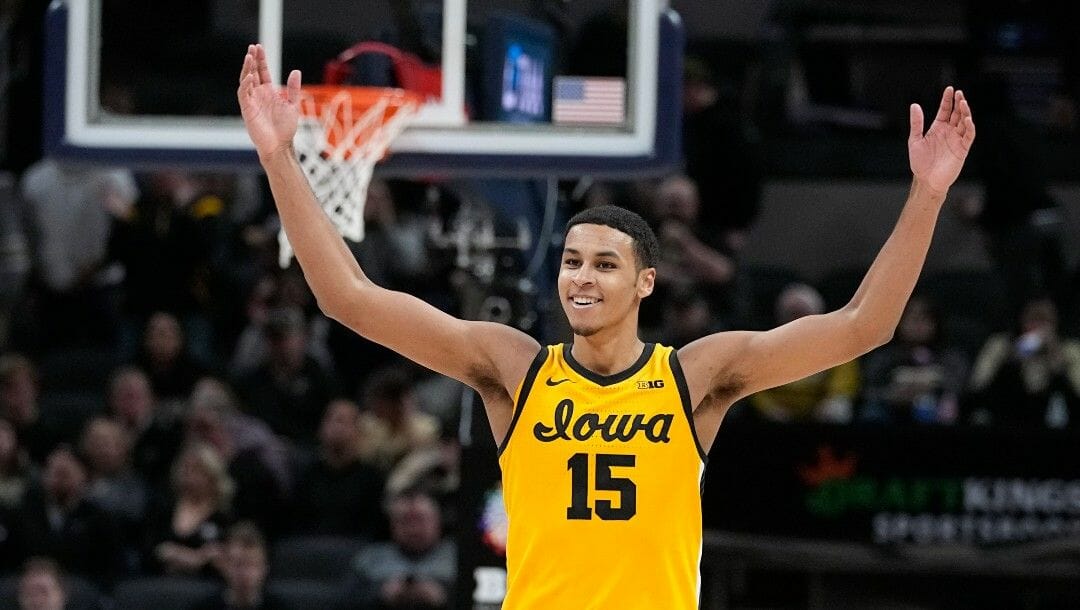 His opponent was distracted for a mere moment, and that’s all Keegan Murray needed.

The Iowa forward, who’s among the NBA odds leaders to be drafted No. 1 overall, possessed the ball as his team was tied with Purdue during the Big Ten Championship. The two teams were tied at 36 early in the second half.

As Murray dribbled away from the hoop, a defender turned away for a second to survey the rest of the court. Murray noticed, backed up and pulled up for a 3-pointer from the corner.

The former Hawkeye is a constant threat to score, no matter if it’s from the paint or the perimeter.

Murray is tied for the fourth-best NBA Draft odds to be selected first overall at +10000. Jabari Smith of Auburn is first at -175, Gonzaga’s Chet Holmgren is second at +125 and Duke’s Paolo Banchero is third at +1300.

The Indiana Pacers would be a logical team for Murray to go to at No. 6 overall.

The Pacers were 18th in offensive rating and 20th in effective field goal percentage last season. Murray could help with that.

The Pacers were out of the playoffs at 25-57 in 2021-22. However, with a proven head coach like Rick Carlisle, Murray may be in a situation where he can grow as a player.

With veterans like Buddy Hield and Ricky Rubio on his team, Murray can learn from them, take his time to acclimate to the NBA and become what he’s capable of.

After playing primarily off the bench as a freshman, Murray earned some elite accolades in 2021-22.

He was a consensus first-team All-American, the Karl Malone Power Forward of the Year, and a finalist for other awards. In addition, he was a first-team all-conference pick and the Big Ten Tournament’s Most Outstanding Player to go with academic honors.

Murray was first in the country with 26 20-plus point games and 16 25-plus point games, leading the nation in Player Efficiency Rating. Helping the Hawkeyes to their first Big Ten Tournament title since 2006, he set a conference record with 103 points in those four games.

Murray increased his scoring average by more than 16 points from his freshman year. That season, he was a member of the All-Big Ten freshman team and was the team’s newcomer of the year. With 31 appearances and four starts, he was the only bench player in the nation to total more than 200 points, 35 blocks, 25 steals and 15 3-pointers. He averaged 7.2 points and 5.1 rebounds for the year.

Whether he’s driving or shooting, Murray is thrilling to watch. His movements are chaotic, but to be sure, that’s not necessarily a weakness. If anything, it ensures he’s more challenging to defend.

The forward can get his shot off the dribble or spotting up. He consistently sinks shots from deep in pressure situations. He proved that when he broke a tie with a 3-pointer less than two minutes to go against Indiana during the Big Ten Tournament.

At 6-foot-8, 225 pounds, he can back down many players in the post and will take advantage with a dependable fade away or drop step.

KEEGAN MURRAY MAGIC 🎩@keegan3murray ties the game for @IowaHoops and sends the game to OT! pic.twitter.com/Qn5QuicCFf

When he’s driving, he’s a bruiser. His court vision is excellent, which leads to chances for him to drive into the paint for open passes or dunks. And because teams must respect that, his stepback is even more difficult to defend.

He’s also imposing on defense. He’s timely in how he pokes away passes or shots. He can defend almost anyone as well.

This skill set will make him valuable for NBA teams. Competent dribbling with both hands, he can bring the ball up or post up, leading to a rare positional versatility.

Murray has had his fair share of less-than-stellar moments. He’s gone from cashing 3s to air balling floaters, locking down guards, and watching them whiz by.

But he’s still young. These mistakes may become rare in the right situation.

NBA Odds at the Sportsbook

BetMGM is your ticket for updated NBA odds throughout the season.

Take your basketball entertainment to the next level by wagering on hundreds of games each year. Instead of just watching games, you can bet on various odds, including spreads, moneylines, player props, and more.