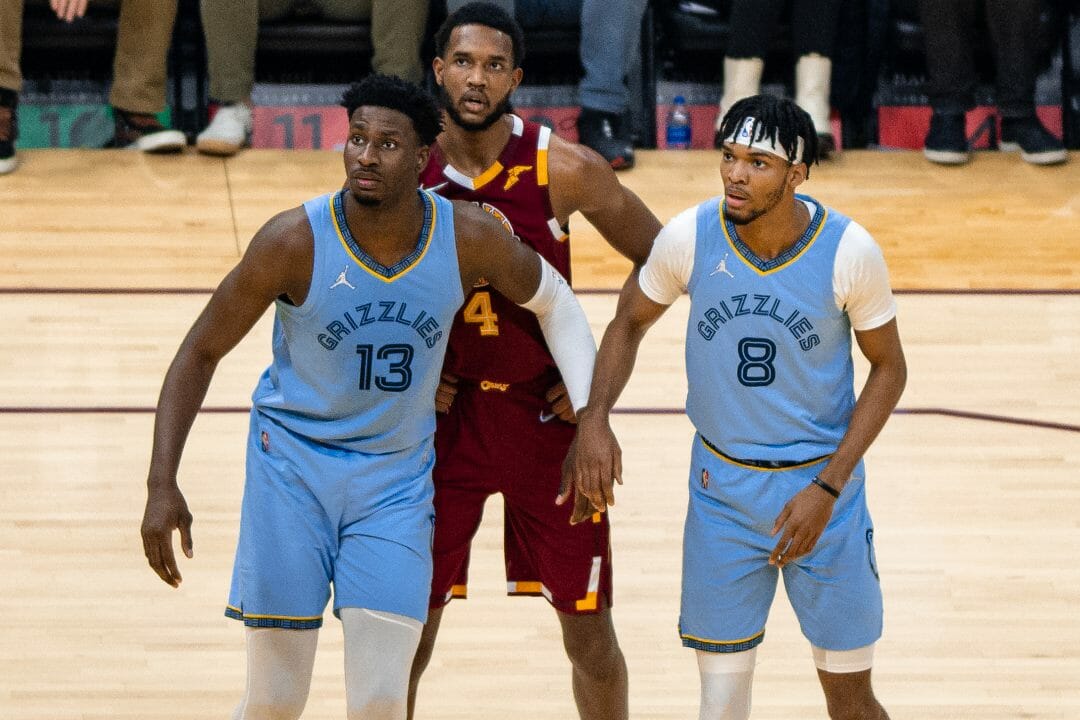 His team’s options eliminated with every passing second, Jaren Jackson Jr. pulled up seemingly out of desperation.

The Memphis Grizzlies, who have NBA Finals odds of +5000, had been leading for a large portion of Monday’s playoff game against the Warriors at home. That is, until it mattered.

The Grizzlies trailed by three with less than 13 seconds to go. In hopes of knotting up the score, Jackson pulled up from 30 feet away.

Draymond Green affected the shot, which fell well short. The Warriors’ lead would remain, and their resolve would prevail. Golden State won the game, 101-98.

“That’s a shot I work on every day,” Jackson said. “I just missed.”

Ja Morant, the NBA’s Most Improved Player of the Year and a rising superstar, would’ve been helpful in that moment. Due to a knee injury, he wasn’t available and is doubtful to return for the rest of the postseason.

The others the Grizzlies could turn to were close to victory, but they couldn’t quite win on their own.

“You recognize the good things you did and just focus on the season isn’t over yet,” Memphis head coach Taylor Jenkins said. “Just go focus on winning one game. … I said if you play with that effort and that urgency, you’re going to have a chance to win every single night.”

Draymond Green comes up with a huge block on what could have been the game-tying three!

Steph Curry will go to the line and try to seal Game 4 for the Warriors! #NBAPlayoffs pic.twitter.com/LkAxnD1Ojv

The Grizzlies will host the Warriors at 9:30 p.m. ET for Game 5 of a Western Conference semifinal series. The Warriors, who have NBA championship odds of +220, have an NBA betting line of -4.5.

The Grizzlies are the second-seeded team in the conference after going 56-26 during the regular season. The No. 3-seeded Warriors went 53-29.

The Grizzlies survived a six-game series with the Timberwolves in Round 1. Now they face a 3-1 deficit against Golden State.

“Nothing changes in terms of the mindset for us,” Grizzlies center Steven Adams said. “Did our best. The next time, we’re going to do exactly the same. Try like hell and hopefully it goes our way.”

Morant’s been stellar this season, including during the playoffs. He’s one of the most pivotal reasons the Grizzlies dominated up until this point.

The point guard paced Memphis in assists and scoring in all three of the games he’s played in this series. That included a 47-point, eight-rebound, eight-assist explosion in Game 2, resulting in a 106-101 Grizzlies win.

But in the Warriors’ first game at home, they won 142-112. And Morant’s knee was injured as well.

On Tuesday, the Grizzlies announced a bone bruise would keep him doubtful for the remainder of the playoffs.

“Whoever’s out there, we don’t really think about a record with or without Ja or who is in the lineup,” Grizzlies forward Kyle Anderson said. “I think we’re all professionals. We all care for each other. We trust the coaching staff, whatever five they put out there.

“So it’s not really anything we think about. Whoever goes out there, we have to have the utmost  faith and confidence in and go out there and do what we’re supposed to do.”

Even when Morant was out during the regular season, the Grizzlies were triumphant. They were 20-5 during games without him.

And the Grizzlies even led for much of Monday, by as many as 12 points with 10:35 to go. But minute mistakes allowed the Warriors to stay within striking distance.

For the most part, the Grizzlies were successful on defense. They forced the Warriors to shoot 36 of 90 (40%) from the floor and 9 of 37 (24%) from 3-point range. And for all that the Warriors are capable of, they only scored 101 points.

The Warriors have a 3-1 series lead over the Grizzlies with Game 5 in Memphis on Wednesday.

What is Ja Morant's status?

"It's not clear whether he'll play in game 5 but it doesn't look good right now.” — @ShamsCharania

In certain moments, the Grizzlies were out of position on pick-and-rolls. They didn’t locate and contest shooters like Klay Thompson and Andrew Wiggins. Cuts resulted in Stephen Curry scoring on easy layups.

The Warriors totaled 39 points in the fourth quarter. The Grizzlies couldn’t muster enough offense to keep up.

“I felt we should have walked away with the win, but you can’t hang your head for too long,” Anderson said. “It’s obviously tough, especially against a team like that where we played hard and we did our job and we just didn’t come out with the win. It’s tough.”

In many ways, the Grizzlies illustrated what made them a force during the regular season. Jackson, for example, paced Memphis with 21 points and five blocks as he scrambled around the court on defense.

Granted, it was on 7-for-21 shooting while making none of his seven 3-point attempts. He shook his head when he saw that last number during a postgame press conference.

“I wanted more from myself than that,” he said.

But the 22-year-old power forward out of Michigan State should continue to progress as a pillar for the team.

“I just had a lot of trust in him to make a play late in the game,” Jenkins said. “We put the ball in his hands.”

Ja Morant & Jaren Jackson Jr. are the 2nd duo age-22 or younger in NBA playoff history with 30 points in the same game.

The other is Kevin Durant & Russell Westbrook (3 times)

The question that will remain this offseason, if they don’t advance past this round, is how the Grizzlies can become a true contender. While Morant and Jackson will continue to grow as centerpieces of their team, Game 4 against the Warriors proved they don’t have quite enough around them to close out postseason battles.

Maybe a disgruntled star will want to join forces with the likes of Morant and Jackson. Perhaps those two will provide all the star power needed, and the Grizzlies simply need better shooting and defending around them.

Either way, Memphis is close to that elite tier of NBA teams — just not quite there yet. But until then, the Grizzlies will fight to remain alive for just one more game.

“I’m just super proud of how hard our guys competed tonight. Unbelievable effort for 48 minutes. The ball just doesn’t bounce our way a couple of times late in the fourth quarter,” Jenkins said. “We’ve just got to find a way to play better.”