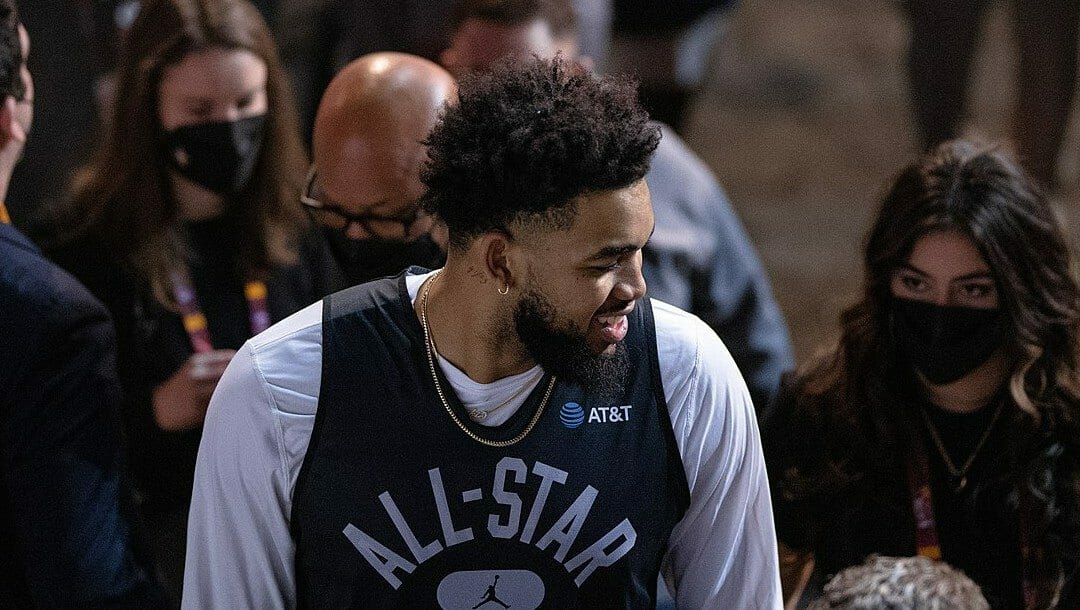 The defenders before him, in a moment of blunder, basically cleared the way for Anthony Edwards to score. So he seized the opportunity.

The Minnesota Timberwolves, who have NBA Finals odds of +8000, were looking to build on their 10-point lead in a game against San Antonio on April 7. Edwards was instrumental in ensuring the Wolves finished with a win.

Edwards drove from the left wing, and two Spurs swarmed around him. When he picked up his dribble, they both were out of his way, readying for a pass or something other than the obvious.

Edwards took the easy third-quarter layup. The threat of him scoring, similar to the possibility of his team winning, had apparently been forgotten.

After an abysmal start to the season, this is symbolic of the Timberwolves. But they proved they should no longer be an afterthought.

The 2nd-year guard (21.3 PPG this season) and the @Timberwolves host the Clippers in the #MetaQuestPlayIn at 9:30pm/et on TNT! pic.twitter.com/XWy2t1heLK

The Timberwolves will host the Los Angeles Clippers at 9:30 p.m. ET Tuesday night in a postseason play-in game. The winner will be the seventh seed and face off with the No. 2-seeded Memphis Grizzlies in the first round of the playoffs.

The Timberwolves have NBA odds of -2.5 to win. Led by Paul George, though, the Clippers are capable of securing a victory, forcing the Wolves into a win-or-go-home matchup against the winner of the Pelicans-Spurs game.

The Wolves have star power of their own. With Edwards and All-Star Karl-Anthony Towns performing as they have recently and D’Angelo Russell returning from injury, they will pose issues for postseason opponents.

They also have momentum. After beginning the season 16-20, they lingered around .500 and subsequently went on a 21-9 run for a spot in the play-in tournament.

Another look at his bucket for 60.

The Wolves are on a stellar pace in part because of their offensive synergy.

They lead the league in pace and are third in offensive rating since the All-Star break, first among West teams. They’re difficult to keep up with because of their ball movement, as they’re 10th in assist percentage.

When Karl-Anthony Towns faced double teams during the regular season, he repeatedly talked about needing to "make the right play" against that coverage, saying the right play is kicking it out.

I asked KAT at shootaround today if that is still the "right play" in the postseason. pic.twitter.com/alfuSCFN5t

But his impact goes beyond that. The versatile big man is instrumental to the success of others around him.

In that Spurs game, he scored on post-ups and drives. He sank step-backs from the perimeter, finishing 4 of 7 from 3-point range.

With 21 points, Towns also totaled a team-high 13 rebounds for a double-double. He also made passes crucial to the flow of the offense.

KARL-ANTHONY TOWNS THROWS IT DOWN 😳 pic.twitter.com/SOY7zGgUlH

Late in the second quarter against the Spurs, Edwards ran around Towns, who held the ball on the left wing. From there, Towns was in range of scoring, so he drew the defense’s attention.

Towns capitalized with a brilliant bounce pass to Edwards as he cut to the basket. Towns’ ability has especially helped Edwards of late.

Edwards, in his second year out of Georgia, has been playing exceptionally well down the final stretch of the season.

He’s averaged 22.4 points, 5.3 rebounds and 4.6 assists in his last 10 games, which are all increases from his season totals.

Edwards was perhaps at his best against the Spurs. He scored at will when driving to the hoop, and his jump shot was on point.

🔥 Anthony Edwards is ON FIRE 🔥

Early in the fourth quarter, Edwards secured a handoff near the top of the key. He appeared he was going to penetrate the lane, so Josh Richardson scrambled to keep up.

Edwards instantly halted and crossed over. Richardson’s momentum carried him to the free-throw line. An open 3 ensued.

If Edwards continues at this pace, and Towns remains the focal point of their offense, the Wolves will represent a formidable challenge for anyone in the NBA.