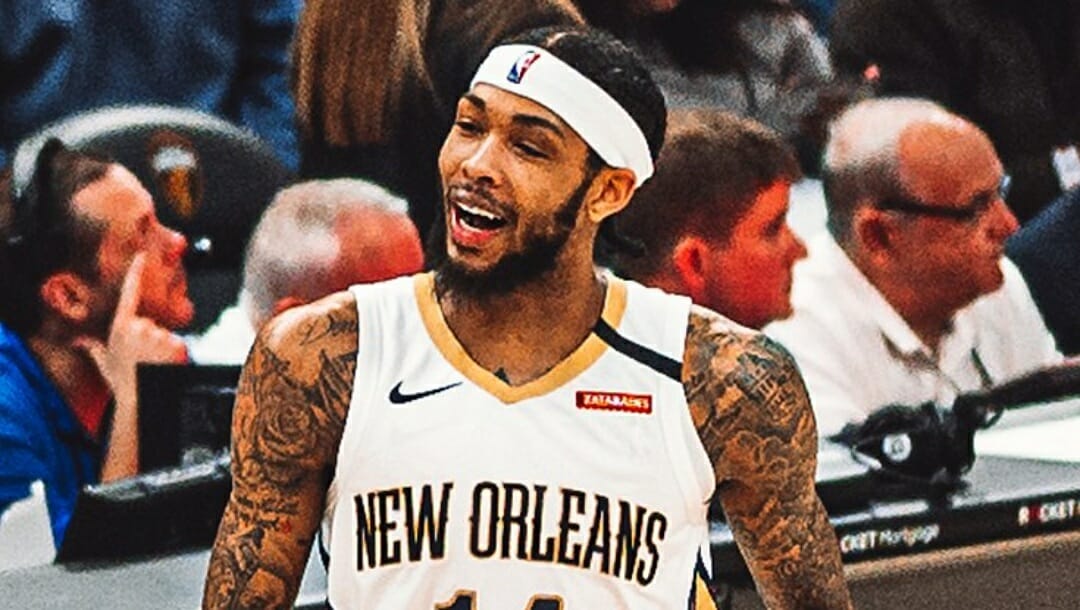 On Wednesday night, after leading by as many as 21 points, the New Orleans Pelicans appeared to be seeing a sure postseason victory in the NBA Play-In Tournament slip away.

The Pelicans, who have NBA Finals odds of +20000, possessed a substantial lead in the fourth quarter. But the San Antonio Spurs prevented them from making a field goal for six minutes, helping them slash the lead to six points.

With the help of a few baskets by Brandon Ingram, though, the Pelicans staved off an upset, elimination and catastrophe.

This is representative of New Orleans’ season as a whole. A season of tribulation has culminated in reaching the precipice of the NBA playoffs.

🏀 @B_Ingram13 started the night with a MONSTER slam before leading the @PelicansNBA in the clutch to seal their #MetaQuestPlayIn victory!

NOP vs LAC for 8th: 10:00pm/et Friday on TNT pic.twitter.com/irjtTJfjCr

After defeating the Spurs 113-103 on Wednesday, the Pelicans will play at the Los Angeles Clippers at 10 p.m. ET Friday for the right to become the Western Conference’s eighth seed in the playoffs.

The Clippers, who were the eighth-best team in the West standings during the regular season, are coming off a 109-104 loss at Minnesota in their first play-in game. Paul George paced the Clippers with 34 points to go with seven rebounds and five assists.

When looking at NBA betting lines, the Clippers are 3.5-point favorites over the Pelicans. LA also has NBA championship odds of +3500.

The Pelicans opened the season 1-12. And some of those losses weren’t particularly close.

This was all in a season without former No. 1 pick Zion Williamson as he’s healing from injury. Early on, the Pelicans didn’t consistently produce offensively without him.

They steadily climbed back up the standings, however. After their poor start,, they never lost more than four games in a row. They just never strung together more than four wins either.

In a midseason trade, the Pelicans acquired CJ McCollum. This provided a key spark.

In only his second game with the team, McCollum paced the Pelicans with 36 points. He led the team in scoring six straight times.

Of his 27 regular-season games with New Orleans, he led the team in points on 16 occasions.

The former Trail Blazers guard has provided an important scoring threat opposite Ingram. Against the Spurs, either one of them could create open shots at a moment’s notice.

McCollum helped New Orleans build its early lead, scoring 27 points in the first half. But he ended the night with 32 points on 12-of-23 shooting while making 3-of-5 3-pointers.

Ingram was 11-of-19 shooting for 27 points. Jonas Valanciunas tallied 22 points, and no other Pelican scored more than 12.

Despite the challenges the Pelicans have faced, Ingram was crucial to keeping hope alive in New Orleans.

Ingram was 25th in the NBA in scoring at 22.7 points per game, just one spot in front of McCollum at 22.1. But his impact went beyond that.

Aside from Valanciunas, no Pelican who’s been on the roster all season has averaged more than 12 points per contest. He helped keep them within reach of the postseason before McCollum arrived.

And after the Spurs had snagged momentum in Wednesday’s tilt, Ingram stole it back. He scored eight of the Pelicans’ final 16 points down the stretch.

With McCollum and Ingram united, combined with Valanciunas leading the way for one of the best rebounding teams in the NBA, the Pelicans simply continue to sustain their aspirations of being the No. 8 seed in the postseason.