Phoenix Suns Motivated To Win Title This Time Around 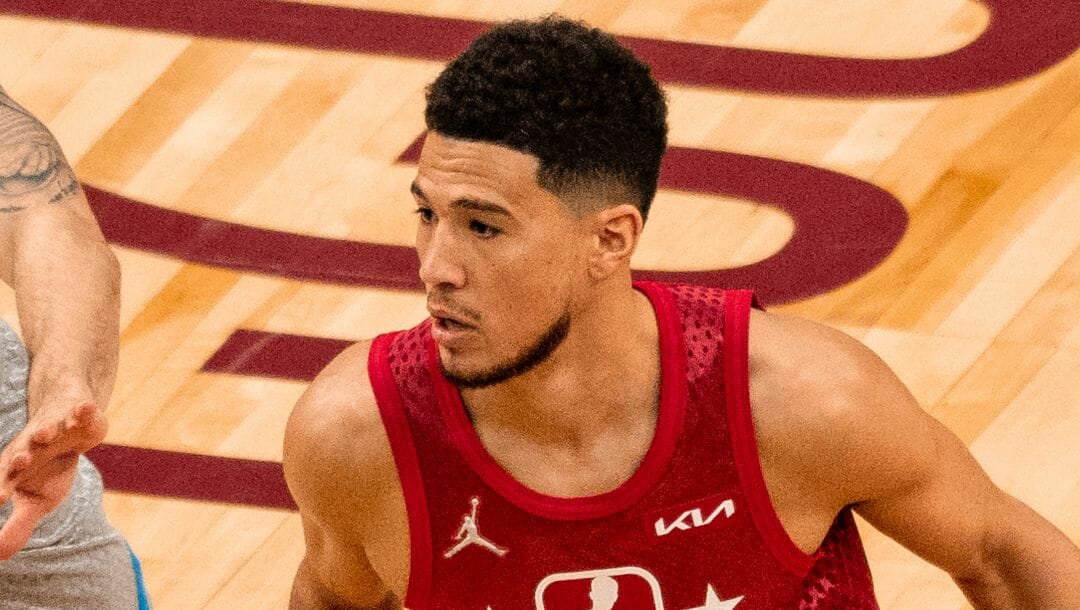 The Phoenix Suns seemingly had everything in their favor, then almost nothing.

The Suns, who have the leading NBA championship odds of +260, had won 15 of their previous 19 games. They continued to cement their place as Western Conference leaders.

Even when they were about to stumble against the Sacramento Kings in March, the Suns bolstered their dominance of the league.

All-Star point guard Chris Paul’s thumb was broken, and backup point guard Cameron Payne was also out due to an illness. Then starter Jae Crowder was injured in the Kings game.

Other stars? Deandre Ayton and Devin Booker fouled out. Backups? JaVale McGee, another center, also fouled out. Other depth? Sixth-man Cameron Johnson was missing due to injury.

The Kings gained a one-point lead with 41 seconds left in overtime. Yet the Suns, as they have at a record pace, found a way to win. Landry Shamet hit a late 3-pointer, lifting Phoenix to a 127-124 victory.

After falling in the NBA Finals a year ago, the Suns are clearly motivated to lose no more.

“We just find ways to win,” Booker said after the Kings game. “Everybody is locked in on all cylinders.”

Coming through in the clutch!

Book & CP3 were the only two players in the @NBA this season to shoot over 55% in the clutch (min. 40 shot attempts). pic.twitter.com/bBaOR0I3Yb

Phoenix will continue its quest for its first championship in franchise history with Game 1 of a first-round playoff series. The Suns host the winner of Friday’s matchup between the New Orleans Pelicans and the LA Clippers at 9 p.m. ET on Sunday.

The Suns earned a No. 1 seed by finishing the regular season 64-18, a franchise record for wins. That was after losing three of their first four games and four of their last six.

The Suns didn’t lose three games in a row all season. They compiled win streaks of 18, 11, nine and eight games.

“We all compete. We all trust in each other, believe in each other, empower each other,” Shamet said after the Kings game. “I’ve been saying that all year. From a locker room and a cohesiveness standpoint, we’ve got every piece, all the intangibles in that sense, great leadership. We got everything. So it’s the best locker room I’ve been a part of for sure. It’s fun. I love these guys, and we all fight for each other.”

As dominant of a scorer Booker has been, this season might be his best yet.

Booker is averaging a career-high 26.8 points per game, which puts him 12th in the league. With the seventh-highest usage percentage, Booker is fourth in offensive rating.

Booker has the leading NBA Finals MVP odds at +500.

“We’re all on the same mission,” Booker said, “and that’s to win basketball games.”

"We're all focused. We have a good group in that regard, understanding what's at hand and understanding how montrous this whole thing can be for us, and we want it to be like that." Devin Booker as #Suns head into playoffs with #NBA best record. pic.twitter.com/5qngtaZd6i

Paul is nearly 37 years old. But he’s still providing a dynamic presence for the Suns.

This year, he became the first player to pace the NBA in assists and steals in five or more different seasons. He leads the league with 10.8 assists per game this year and is fourth with 1.9 steals, reaching fourth all-time in that category.

Paul also leads the NBA in assist ratio and is third in assist percentage. This helped him rise to fifth in net rating.

Booker noted the Suns are loaded with intellectual leaders. Paul, though, is the most vocal among them.

Some elite company for Chris Paul!@CP3 is also the first player in NBA history with 5+ assist titles and 5+ steals titles. #NBA75 pic.twitter.com/ODsjIWqGMV

But unlike other teams he’s been on, Paul doesn’t carry the burden of scoring consistently. He’s averaged a career-low 14.7 points per game. Paul is among nine Suns who average at least nine points per game.

And even when he’s gone, like that Kings contest, the Suns manage to win.

“It’s gratifying because of so many guys stepping up, so many guys making a contribution,” Suns head coach Monty Williams said after the victory over Sacramento. “But everybody on our team that had a uniform on had a chance to have an impact in the game and I keep talking about needing guys in those moments so that when it happens later in the year, guys are comfortable in those situations.”

The Suns are balanced in many ways.

They lead the NBA in net rating. They are among four teams in the top 10 in both offensive and defensive rating this season. They’re also in the top 10 for effective field goal percentage (fourth), assist ratio (fifth) and pace (eighth).

The Suns are among the best defensive teams in the NBA thanks in part to Mikal Bridges. He was tied for the third-best NBA odds to earn the Defensive Player of the Year award at +600.

“He loves to work and he’s a winner,” Williams said. “When you look at what he did at Villanova, he’s doing the same thing here just on a much bigger stage. He guards the toughest guys every single night without a blink and everybody in that locker room appreciates what he does every single night.”

"He's somebody I wouldn't want guarding me. I'll tell you that."

"I don't agree with Book. I don't really care if he guard me. I ain't worried about Mikal."

"I am. More than the other candidates."

The numbers, the potential accolades and the wins all illustrate a team of cohesion, savvy, and most of all, determination.

Merely a few years ago, the Suns were regarded as a young team with potential in the future. But that future has arrived.

Phoenix is now a franchise of expectation. Making the finals as they did last year seems to be insufficient.

“We just find ways to win games,” Shamet said. “That’s been our MO this year.”

From the play-in tournament through the NBA Finals, BetMGM is your ticket to bet online during the NBA playoffs. With spreads, player props, and updated NBA playoff odds, there’s something for everyone at the online sportsbook.