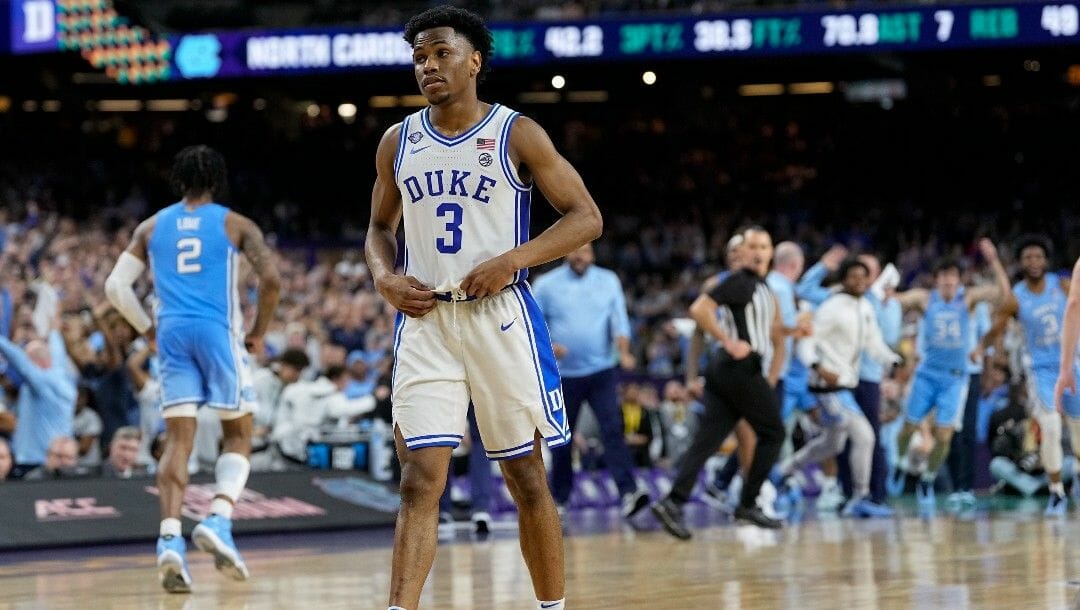 When it comes to NCAA basketball odds, doesn’t it sometimes feel like it’s impossible to correctly guess what’s going to happen next?

The answer is often yes – they do call it March Madness for a reason. But in certain cases, if you embrace a contrarian betting strategy and a little bit of history, you can actually get ahead of your online sportsbook.

Ahead of Monday’s classic national championship matchup between Kansas and North Carolina, I wanted to lay out everything I saw over the last week: how online sportsbooks positioned themselves for a big philosophical advantage on the totals, as well as what it means for Monday’s title game.

Even if you read this after the season ends, I think there’s value in filing this information away for next year’s crop of NCAA basketball lines. As you’ll see, this is a pattern that repeats itself.

Let’s get into the numbers.

I talked a lot last week, before the Final Four, about how the regional championship games have a huge impact on how we perceive the coming games.

The most comprehensive version of this conversation was on our podcast, The Lion’s Edge, but we chatted about it live on Twitter Spaces and in other places, too.

We’re going LIVE at 4pm with @DoughtyBetMGM and @chaseakiddy to talk about tonight’s MASSIVE matchups! Tap in to get a reminder 👇 https://t.co/L94xJtm4ne

One of the clearest trends that emerged from the second weekend of NCAA basketball lines was the crop of unders. All four Elite Eight games came in under the posted total, with some cashing way under.

In the case of the latter, I even said at the time that the noticeably low total was an overt signal that the game would be very low scoring and that bettors should expect an under.

With four straight unders and six ensuing days to think about betting the Final Four games, I pointed out that many public bettors would probably come into the national semifinals with a heavier-than-usual appetite to bet on unders. It was a foreseeable trend.

This is exactly what happened.

The first game between Villanova and Kansas was hit especially hard, thanks in part to the low-scoring game with Houston fresh in bettors’ minds. A whopping 72% of the overall handle was on the under, per Action Network.

And instead of a rock fight, bettors watched a new record for 3-pointers in a Final Four game. Ultimately, both games went over the total.

A little bit of historical context shows that these trends show near-instant regression. For a clear and recent example, take a look at the NCAA odds from last year’s tournament.

After the 2021 Sweet Sixteen, the eight remaining teams had the usual 36 hours to prepare for the regional final. The result: three of the four games went under, with some of the results being similarly dramatic. UCLA, for example, edged out No. 1 Michigan, 51-49, in a game that had a closing total of 137.

During last year’s Final Four, bettors lined up behind seemingly wise unders. And of course, just like this year, the over went 2-0.

The moral of this particular story is that total mean regression hits hard between the Elite Eight and the Final Four. It’s not guaranteed every single year, but games are just lower-scoring when you have less than two days to get ready for a game.

Add in the marketplace factors behind gamblers banging unders, as well as the wise sportsbook trading teams that might shade the number low to begin with, and you’ve got the recipe for a series of year-to-year wipeouts on Final Four totals.

If you’re looking for an edge in the very last set of NCAA basketball odds we’re going to see this season, consider returning to the under.

Recall that, unlike Saturday’s semifinals, Monday’s game is being played on a two-day turnaround. Last year, after both of the Final Four games went over, the championship game went under, despite a 40-minute deluge of hot shooting from Baylor.

If you’re still not convinced, factor in the public’s desire to switch back to the over after Saturday’s games.

In fact, this is more than just a straight public fade – the total is down from 153 to 151.5, despite the fact that 63% of tickets are on the over. This is classic reverse line movement.