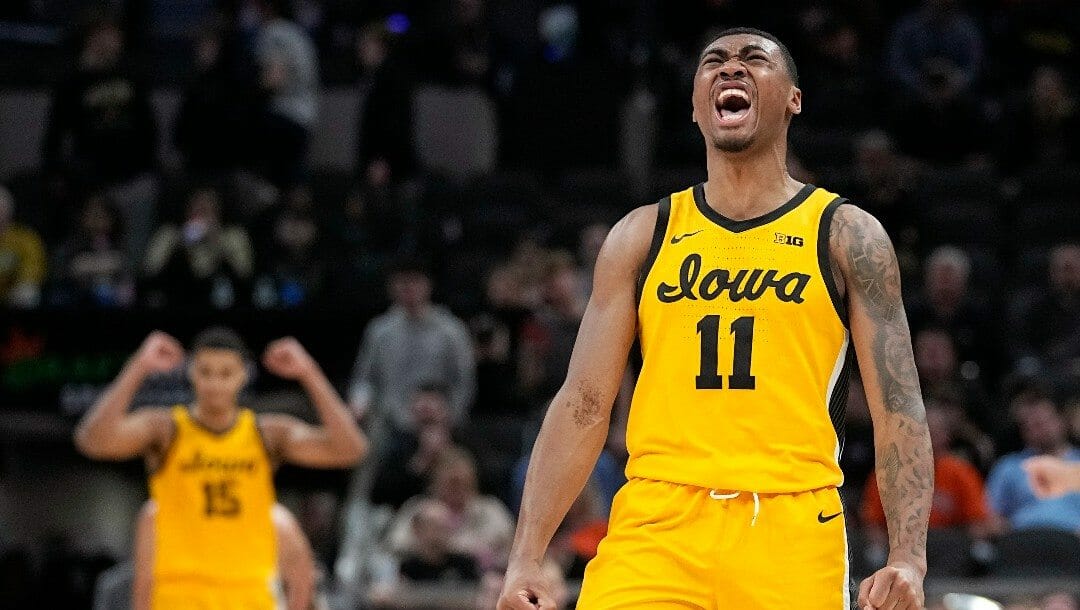 There are a number of teams with good NCAA basketball championship odds, including Kansas in the Midwest Region.

Here’s a look at that Midwest Region, including who we believe will advance to the Final Four in New Orleans.

No. 1 Kansas has the easiest path of any top-seed in this year’s NCAA tournament.

For my money, the Midwest is the weakest region of the four and I don’t see much of a test for the Jayhawks until the Sweet 16 rolls around.

Ochai Agbaji is one of, if not the best player in this quadrant of the bracket and he has Kansas cruising into March off the back of a Big 12 tournament title.

The key for this team will be the performance of their wing players. Christian Braun is a high-level scorer that will need to step up in his secondary role while Jalen Wilson can take advantage of the attention those two will be getting with some high-level performances of his own.

Ochai Agbaji's game-tying 3 on Monday rightfully got a lot of attention. But this dunk off of one of #KUbball's lob plays was SportsCenter Top 10 worthy as well. pic.twitter.com/NlMdf0dc99

There may not be a hotter team in the nation right now than No. 5 seed Iowa.

The Hawkeyes are certainly playing their best basketball of the season and if Kansas’s Abgaji isn’t the best player in this region, it’s Iowa’s Keegan Murray. Murray ranks fourth in the nation in scoring and is the spearhead of the second-best offense in the tournament according to KenPom.

Moreover, No. 12 Richmond feels overseeded to me which (hopefully) avoids any potential 5/12 drama and I almost am more scared of a potential matchup with No. 13 South Dakota State than No. 4 Providence in the Round of 32.

This Iowa team can score with both Kansas and Auburn, but its defense will need to continue to add onto its recent improvements to elevate to a Final Four level of play.

The aforementioned No. 13 South Dakota State team has offensive numbers that will make your jaw drop.

The Jackrabbits from the Summit League have won 21 straight games with their last loss coming before Christmas. They rank 12th nationally in KenPom’s offensive efficiency rating, are the No. 1 3-point shooting team in the country, and take care of the basketball at a top-25 rate.

Baylor Scheierman is the team’s centerpiece and with a lanky 6-foot-6 frame, he can make buckets from anywhere on the floor. The X-factor is Luke Appel, a sixth-man who scored 41 points in a crucial win over Oral Roberts back on February 24. He is currently battling a foot injury but if he is able to go, keep an eye on him.

SD State’s issue is on the defensive end. They rank outside of the top 200 in the nation and that is a serious concern both against Providence and against the dynamism that Iowa brings.

The defense has been the concern and limitation for Iowa, which is why head coach Fran McCaffery has made it an emphasis for this team over the last month or so.

The Big Ten champions rank second nationally in Bart Torvik’s T-Rank when sorted since the beginning of February and that’s in large part due to a defense that has improved to nearly top 50 in that span.

That may not sound sexy, but when you have an offense that can pour in 80 points like it’s nothing against elite opponents, you’re going to be hard to stop in March.