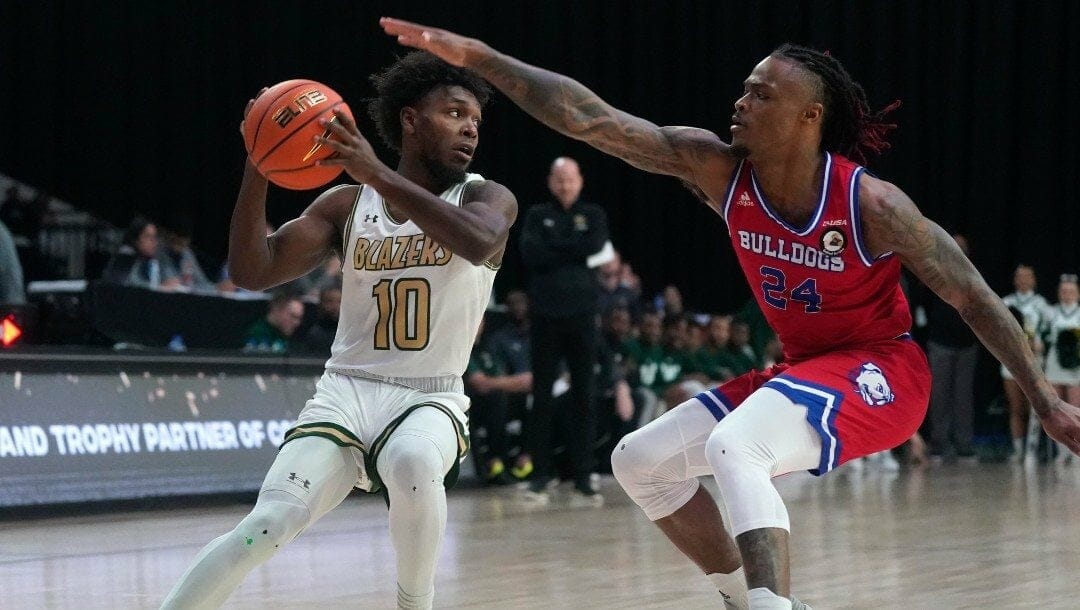 One of the most popular trends when it comes to filling out brackets and betting is picking a 12-5 upset.

So, which No. 12 seed is most likely to pull off an upset this year?

In my bracket, this is the only 12-5 upset that I have taking place.

Predictive metrics feel that Houston is incredibly under-seeded here. It ranks fourth in KenPom, but has just two wins over tournament teams on the season (one of them being No. 16 Bryant) makes you wonder how battle-tested they truly are.

This could be a serious breakout spot for UAB guard Jordan Walker, otherwise known as Jelly Walker. He is one of the best players you haven’t heard of heading into March Madness and could give the Cougars a serious problem. It wouldn’t be surprising to see him go for 30+ points in this matchup and he isn’t the only capable scorer on this team.

The Blazers rank in the top ten in the nation in 3-point shooting and have a 2,000-point scorer on their roster in sharpshooter Michael Ertel.

This team is loaded with experience as their top nine scorers on the season are all upperclassmen. They should have the biggest chance to spur an upset in these matchups.

Still have this Jordan Walker shot on replay 🤩 @UAB_MBB pic.twitter.com/pAodvAJffw

Can Saint Mary’s Avoid An Upset?

I’ve battled with this one and I can see the reasoning for taking the winner of the First Four matchup between No. 12 Wyoming/No. 12 Indiana over Saint Mary’s.

The thing you have to consider is how “upset-prone” the No. 5 seed is that you are fading in these spots and I just don’t see Saint Mary’s as a very upset-prone team. The Gaels played through a WCC schedule that has plenty of pitfalls, chances for upsets, and letdown spots lingered throughout.

Their worst loss of the season came to a Santa Clara team that flirted with the bubble for a bit in February, ranks top 70 in KenPom, and will be playing in the NIT on Tuesday night.

If that’s your worst loss, then the floor is pretty high here for the Gaels and I see too many issues with both Wyoming and Indiana to feel comfortable enough to back them as an outright bracket pick.

This is where we start to enter the realm of, “I just can’t see this one happening.”

UConn has the size, athleticism, and shot-making ability that should trouble New Mexico State. The Aggies have also had some troubles down the stretch of the season, including a loss to 7-25 Chicago State on February 26 which was followed up with a home loss to Stephen F. Austin.

They did right the ship and earned the automatic bid from the WAC tournament, but the question marks are there, especially with the puzzling absence of Teddy Allen down the stretch in that Chicago State loss.

This one just doesn’t ring true as a potential upset.

This is a dream matchup for Iowa.

Not only are they playing by far their best basketball of the season right now, but Richmond feels incredibly overseeded here. You could make a case that the Spiders should be closer to a  No. 14 seed in this bracket and outside of their incredible run through the Atlantic 10 tournament, they have no business being seeded this high.

The Hawkeyes offense should smoke this Richmond defense that ranks outside of the top 100 on KenPom and I simply can’t see them keeping up here. Guard Jacob Gilyard is an absolute stud and has been a cornerstone for this program for some time now, but their dream run should come to an end against the sizzling Hawkeyes.