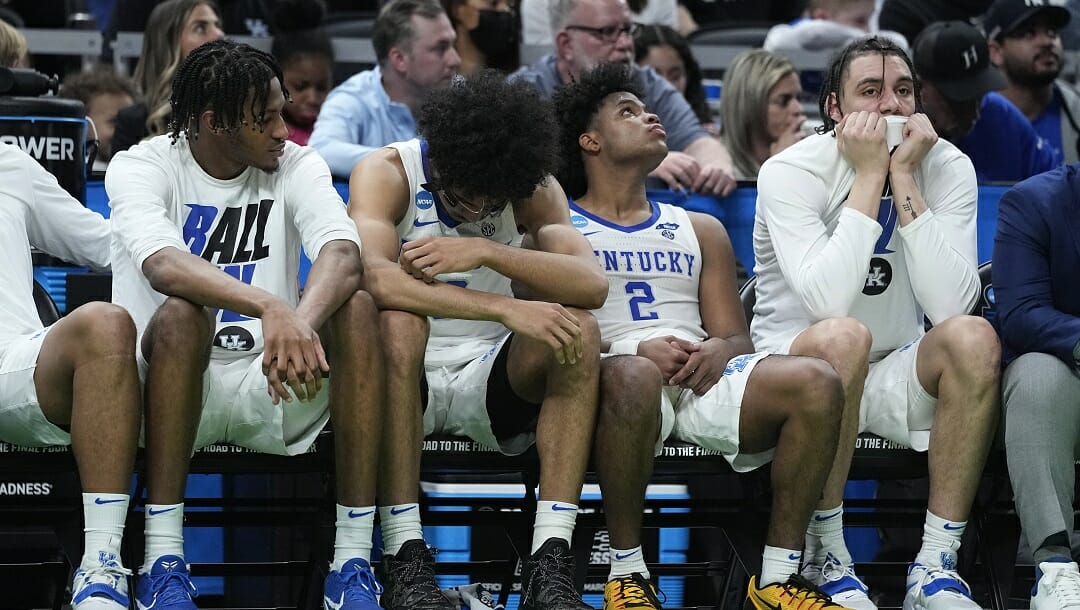 There are so few things I love more than the first day of the NCAA Tournament. The whole first weekend is great, of course, but there’s something extra special about Day 1. Every year, I spend all week glowering over NCAA basketball lines and KenPom ratings, and Thursday afternoon is where all that potential energy turns into frenetic, wonderous action.

This year was no different. Andrew Doughty and I dove headlong into the odds right away on Sunday night, doing some live audio on Twitter. We immediately recorded an episode of our podcast, The Lion’s Edge. We recorded a second one on Wednesday. I zeroed in on a handful of NCAA odds for Thursday.

I locked myself in my office on Thursday morning, preparing to watch the games. I fondly recalled how well I did last year, how much money I added to my savings account with all those smart underdogs I identified.

Believe me when I tell you that this is easily the worst day of college basketball betting that I’ve ever had. Like many pros, I like to bet dogs early in the tournament; thus, early tickets on South Dakota State and Colorado State didn’t go my way. A 1H under on Colorado State/Michigan flamed out as well, when the Rams came out guns blazing.

“Bad starts happen,” I told myself.

I avoided the first popular pitfall when Richmond took out Iowa, the bracket darling of so many casual bettors. I was feeling pretty good about my vision on the Hawkeyes, identifying that they were a trendy Final Four pick and massively overvalued after a Big Ten tournament title. I had a strong lean toward Richmond +10.5 but never actually bought it.

Nonetheless, the Richmond upset restored my betting ego to healthy levels. I was seeing the board fine, and the evening bets would balance me out for the day.

Creighton/San Diego State Under 120.5. Nope. The game went to overtime, presumably just to laugh at me.

Things got really bleak when my six-unit “No Major Upsets” parlay crashed on the Saint Peter’s upset.

I didn’t bother to stay up to see how my San Francisco ticket would do. (It lost.)

The final damage: 0-7 on straight bets, with two failed parlays on top of that. I lost 13 units on net. My only win was pure charity: a promotional bet on the Gonzaga money line at even odds. And even there, I had to sweat.

I don’t even know where to begin. I know I’m a good handicapper. I’ve cashed money out of the sportsbook dozens of times, made thousands and thousands of dollars in profits. It’s not like one bad day – even a really bad day – can change all that.

It’s nowhere close to my worst financial loss, either. I lost 10 times this much money on an FCS Playoff game a few years ago involving Illinois State. And because I’m a visible analyst in an FCS media field with very few national voices, I was mildly embarrassed when my wrong pick was very clearly seen and heard by… the Illinois State football team and athletic department.

I’m not sure anything will ever overtake the sublimely mortifying feeling of getting called out by the Assistant Athletic Director of the school that you just bet thousands of dollars on to lose a playoff football game. But this 2022 NCAA Tournament debacle is going to sting for a while.

I don’t like to lose money. Nobody does. But I reallllllly don’t like losing other people’s money. And right now, more people listen to and read my analysis than ever before. Whether it’s on our podcast, or the weekly radio hits that I do, or on the Action App, or the tweets that I put out – people tail me. And I failed them big time.

Even my director here at BetMGM hit me up for picks on Thursday. I gave him half a dozen losers.

And by the way – next time you think that you’re having a bad day at your job, I offer up for consideration the day where I gave a boss zero winners in the NCAA tournament when my job is to analyze NCAA Tournament odds.

Unsurprisingly, this level of futility did not sit well with me last night when my head hit the pillow last night. My girlfriend, who I recently moved in with, tried to give me a little pep talk.

“Think of all the other people who got stuff wrong today, too!” she said, thinking this would make me feel better. It did not.

“You don’t have all the answers. If you did, it wouldn’t be called gambling.”

A nice sentiment. One that I’m already aware of.

“Everybody loses. It’s part of the process.”

I taught her this. Now she’s just throwing my own hard-won wisdom back in my face.

Sigh. This… was true.

I’m the sort of person who wants to wallow a bit. I really want to feel the bad days. I want them to leave a scar and laugh about them later. I want to remember the mistakes so I don’t make them again.

But Friday is a new day. There are still a few Indian Wells matches to consider, if you’re a fan of tennis betting like I am. And, like it or not, I’ve got plenty of tickets left alive for today’s action: Davidson, Miami and Colgate, to name just a few.

In that spirit, I move forward with a new badge of honor. I’m the BetMGM analyst who got absolutely knocked unconscious on Day 1 of the 2022 NCAA Tournament.

Those touts you see on social media, claiming millions in winnings? The ones who never have a bad ticket to share? We all know the game. Those guys are frauds.

But 0-7 in the NCAA Tournament? That’s about as real as it gets. At least I’ve got that going for me.

From the early-season tournaments through the national championship, BetMGM has you covered for college basketball betting.

From spreads and moneylines to national championship odds and awards, there’s something for everyone at the sportsbook.