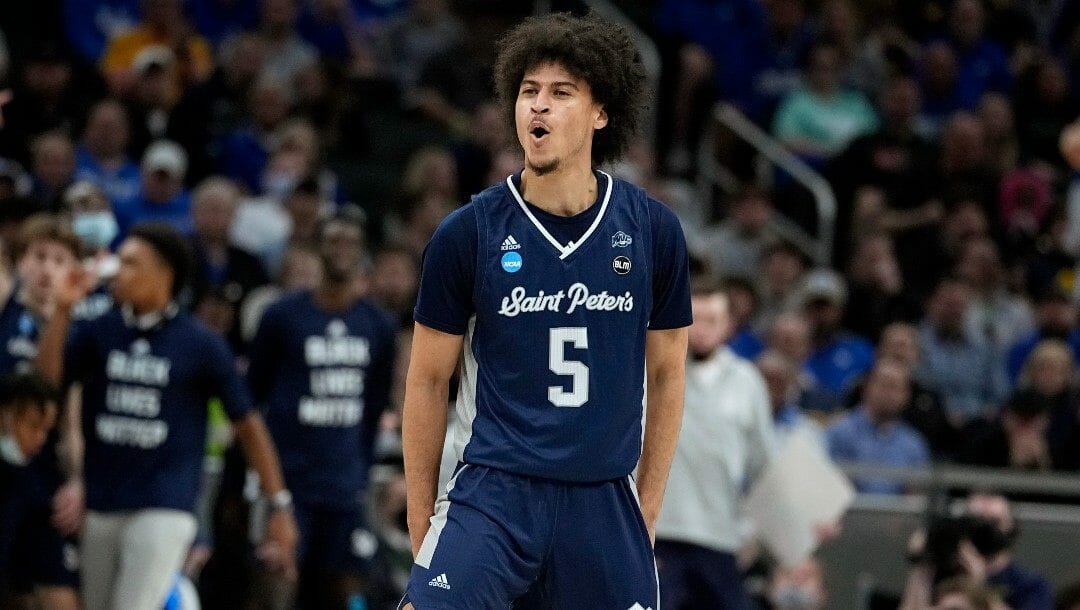 The madness continues into the weekend as the Round of 32 will feature eight games are on Saturday providing more college basketball betting opportunities.

Nobody loves Thursday’s shocking result of No. 15 Saint Peter’s beating No. 2 Kentucky more than Baylor. The Bears and North Carolina had the two biggest margins of victory among Thursday’s first-round action and will make for an awesome matchup for a spot in the Sweet 16.

The Tar Heels look like they are playing their best basketball of the season right now and their blowout win over Marquette on a sizzling 1.27 points per possession was as impressive of a performance as they’ve had all year.

Neither of these teams have much depth with Baylor dealing with injuries and North Carolina relying heavily on their starting five for production.

That makes me look towards the under (149.5 as of now) in this spot. If you can get a spread bigger than +7 on the Tar Heels, it may be worth a look as they have won seven of their last eight and impressed in a big way in the first round.

Kansas rolled in their victory over Texas Southern on Thursday, while Creighton put together a strong comeback to defeat San Diego State in overtime.

Unfortunately, I don’t see how Creighton will keep up with Kansas’s high-powered offense that was on full display in the first round. A large part of the Bluejays being able to come back from the 14-point deficit on Thursday night was a stretch of over six minutes where the Aztecs scored just two points.

You won’t see offensive droughts like that from Kansas and if it wasn’t for that, it’s hard to believe that Creighton would be suiting up on Saturday. The Jayhawks should get it done here.

This is one of my favorite matchups on the slate.

Tennessee’s defense looked better than ever in their commanding win over Longwood and could give Michigan’s backcourt some real trouble if starting point guard DeVante Jones remains out. The Wolverines were dominant down low against an undersized Colorado State team and I worry about who on Tennessee will be able to guard Hunter Dickinson in the paint.

Brandon Huntley-Hatfield may be tasked with that assignment and if that’s the case, Michigan should have a chance to pull off the upset if they can take advantage of that matchup. But, it’s a game of 5-on-5 meaning there are plenty of areas where Tennessee could find a mismatch as well, specifically with a stronger backcourt on the defensive end.

This one should be extremely close.

I truly want to buy into this dream run that Richmond is on, but I just can’t see them getting past this Providence team.

I have been a doubter of the Friars all season and it may have taken the win over South Dakota State for me to somewhat hop on board with the regular-season Big East champs. You have to give the Spiders credit for their defensive gameplan against 4 Iowa in the first round upset, but the Hawkeyes did them plenty of favors missing tons of open looks.

Outside of Jacob Gilyard, there may be three guards on this Providence team better than Richmond’s next-best in the backcourt and that matchup is too much to overcome.

I said “one of” for Tennessee vs. Michigan because this is my favorite game on the slate.

It’s a perfect matchup of pro-caliber talent and individual ability going up against a team with likely zero future NBA players in a system that can wear you down for all 40 minutes.

We saw Saint Mary’s have this exact matchup against Indiana in the first round and the Gaels dumbfounded the Hoosiers for the entire game while holding their offense to just 53 points.

UCLA played to a crawl against Akron and looked severely uncomfortable at such a slow pace against a defense from the Zips that isn’t very good.

Saint Mary’s loves to slow things up (338th in tempo in the nation) and that will play in their favor. You’re getting three points with the Gaels and I love them to not only cover but win the game outright.

Saint Peter’s pulled off what is, in my opinion, the second-biggest upset in the history of the men’s NCAA tournament. They had no business being in that game with 2 Kentucky, let alone winning it, and a similar performance will give them a fighter’s chance against Murray State.

They actually match up fairly well with the Racers and I think the entire world will be anticipating the classic second-round letdown from teams that play way above their level in a monumental first-round upset.

KC Ndefo could do well to contain KJ Williams in the post while Daryl Banks III and Doug Edert proved they can go shot-for-shot with the backcourt of Juice Hill and Tevin Brown.

It’ll be a big ask for the Peacocks to pull off another major upset, but I do think they can cover the big number they are seeing.

Sheer dominance from Teddy Allen for New Mexico State willed them to their upset victory over UConn in the first round. I wouldn’t count on a 37-point outburst for a second consecutive game from Allen and I feel the Aggies will be a bit over their head against this SEC foe.

Arkansas notched a more impressive win than most will realize over Vermont in the first round and although they are a seed-line higher, New Mexico State is a step down in opponent. Allen will be the focus of the Razorback defense and it’s difficult to picture anybody else stepping up if he is locked down by Au’Diese Toney.

Memphis really tried to fumble away the win over Boise State in the first round, but they survived and are rewarded with a date with Gonzaga.

This should be such an awesome matchup and you may not see another game with this much talent on the court at once until the Elite Eight. Memphis has the ability to keep up with Gonzaga, but this game will come down to discipline and patience for the right shot against the Bulldogs.

Turnovers have been a bugaboo for the Tigers all season long, as they are ranked dead-last in the nation in offensive steal percentage. They will need to avoid sloppy turnovers that lead to easy breakaway points for the opposition. If they can do that, they’ve got a shot.

I’ll take the Zags but don’t be surprised if Memphis gives them a serious test here.