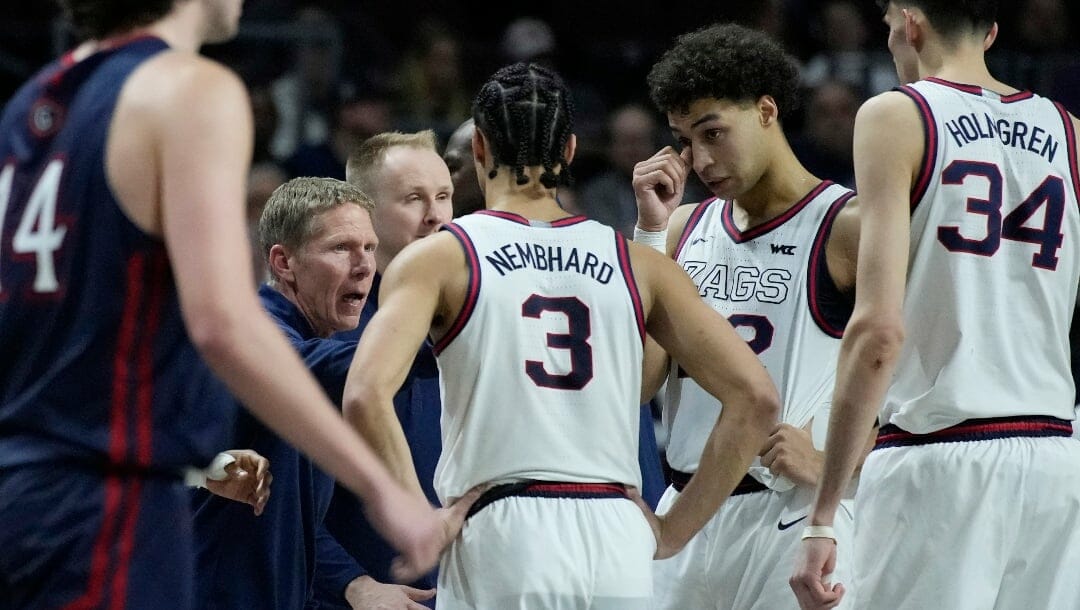 Two of the best days on the sports — most definitely college basketball betting — calendar are almost here and to prepare you for the onslaught of games on Thursday’s slate, I have run through every single one with some nuggets of information that will hopefully help you fill out your bracket and when going through college basketball betting lines.

Let’s take a look at all 16 matchups that will tip off on the opening day of the first round.

The Colorado State disrespect here feels unjustified for me. They are the better all-around team, they have legitimate star power between David Roddy and Isaiah Stevens, and Michigan has been all over the place this season. Hunter Dickinson will probably drop at least 25 in this one, but the brand name is getting to people’s heads.

The Rams should take this one.

Despite being a large seed discrepancy, this has been one of the trendiest upset picks on the bracket. The Jackrabbits are just two-point underdogs and you’re damn right that I am backing them to win here.

They rank 12th in the nation in offensive efficiency per KenPom and No. 1 in effective field goal percentage as well as 3-point percentage. A 21-game winning streak since December 15 is just too much to ignore and predictive metrics do not favor this Providence team. This is the perfect spot to be backing a No. 13 seed.

I have been back-and-forth on this one all week.

It’s a classic matchup of system and experience versus talent and youth. In the end, I will be backing the Broncos in this spot.

Their defense feels like too much for the Memphis backcourt to handle and the dagger was their turnover rate. The Tigers rank dead-last in the nation in steal percentage on the offensive end. This Boise State defense will make them pay for being careless with the ball and while I like how Memphis has grown throughout the season, Boise State’s defense will keep the talent at bay.

Top-seeded Baylor, who has college basketball odds of +1200 to win the national championship, may have a tough path, but it doesn’t begin with Norfolk State.

The Spartans are hard-nosed on defense, but the level of opponent in the MEAC is so low that it boosts up a lot of their percentages. This shouldn’t be a worry for the Bears and I’d be surprised if the Spartans made this any sort of game.

Congrats to Longwood for their first NCAA Tournament appearance in school history after a magical season.

These guys are legit, winning 19 of their last 20 games, and their ability to shoot from deep gives them an outside chance to stay in this one. The Lancers rank sixth in the country in 3-point percentage, something that is key to emerging as a Cinderella in March.

I don’t have them pulling off the upset mostly because I refuse to get in front of the freight train that is the Tennessee defense, but it wouldn’t be surprising to see Longwood keep this one close for about 30 minutes.

I’ll continue to beat this drum until I’m heard: Richmond is overseeded here.

Three of the No. 13 seeds are ahead of them in KenPom and they lack the resume of a No. 12, with just one Quad 1 win and 11 combined Quad 1/2 losses. Iowa can’t stop winning and they can’t stop scoring.

I see no feasible way that the Spiders keep Keegan Murray in check or anyone else from the Hawkeyes for that matter. It was a fun A-10 tournament run, but Richmond’s road ends here.

It’s a shame. Georgia State was dealt a pretty bad hand, as the Panthers aren’t ranked very far away from the tournament’s No. 14 and No. 15 seeds on KenPom and probably shouldn’t be put against the Goliath of Gonzaga in the first round.

Nevertheless, it’s the matchup and it isn’t a pretty one. The Zags will cruise to victory but backing Georgia State +23.5 is worth a wager. They should be able to stay within that number and it may only grow with the public hammering the bracket’s top team.

No. 8 North Carolina vs. No. 9 Marquette

In his second season as a head coach back in 2011, Smart brought VCU to a Final Four in historic fashion as a No. 11 seed. At just 33 years old, he became one of the hottest commodities on the college coaching market.

In 10 seasons since, Smart has been to the tournament seven times and has compiled just two wins. I do genuinely believe that North Carolina is the better, more talented team, but it was worth emphasizing that I refuse to back Smart in any tournament setting until he can prove that 2011 wasn’t a fluke.

UConn provides too much athleticism, size, and talent on both ends for New Mexico State to keep up with. The Huskies don’t have many flat-out poor performances meaning the ceiling is fairly high here and they have won seven of their last nine.

The Aggies have talent but are quite turnover-prone and a recent loss to lowly Chicago State (339th in KenPom) was a befuddling performance.

Saint Peter’s has an elite defense that nobody is discussing because of their matchup.

The Peacocks have the second-highest defensive rating of any No. 15 seed in the KenPom era. Unfortunately, they go up against a No. 2 seed that has national championship talent and capability which should be able to handle the Peacocks just fine.

But, this is another matchup where I don’t mind a wager on the underdog with +17.5 points.

This is the matchup I am least decisive about amongst Thursday’s action.

Indiana has been awesome since the start of the Big Ten tournament (sans the first half against Michigan in the first round) and it’s hard to get in the way of the Hoosiers with such great guard play from Xavier Johnson.

I mentioned him as an X-factor for this team in my First-Four preview and although he was a porous 3-for-12 from the field against Wyoming, the senior notched seven assists and had good control over the offense. Trayce Jackson-Davis is a menace in the paint and I fear for Matthias Tass trying to stop him from scoring.

Looking at Saint Mary’s, they present a team effort on the defensive end that is terrifying. The whole is certainly greater than the sum of its parts here and their togetherness combined with the potential for Randy Bennett to completely outcoach Mike Woodson in this spot keeps me on the Gaels.

But boy, did Tuesday’s win over a talented Wyoming team make this a much harder decision.

I understand the impressive showing all the way to the Big East championship game from the Bluejays, but they beat two sub-top-40 KenPom teams on their way there in Marquette and Providence.

As for the Aztecs, you could not be backing them at a better time. They have won 11 of their last 13 games and have a defense that leaves most head coaches with nightmares preparing for a matchup with them. Creighton is a great story of exceeding expectations, but I can’t see them cracking this San Diego State defense. Ride the streaking Aztecs to the Round of 32.

I hate that I love almost every No. 13 seed and Vermont is certainly one of them.

I entered the NCAA tournament fairly high on both of these teams so I was pained to see them matched up against each other, but it’s baffling me that the Catamounts aren’t getting more national attention for what they have done this season.

In three games in the America East tournament on their way to an automatic bid, Vermont won by an average margin of 37 points. They have won 22 of their last 23 games and have the third-best effective field goal percentage in the nation.

This team probably should have seen a No. 12 seed next to their name on Selection Sunday, but that No. 13 won’t stop me from backing them. Gimme the upset! Catamounts over the Razorbacks in this one and I could see them giving UConn a game in the Round of 32.

THE VERMONT CATAMOUNTS ARE GOING DANCING!!!!!

How criminal of the selection committee to put two high-end mid-major programs against each other in the first round.

Regardless, we get a premier first-round matchup that will undoubtedly be close. The backcourts nearly feel like a wash here, but I’d give the frontcourt advantage to the Racers. KJ Williams could give serious issues to whomever his assignment is from San Francisco (likely Yauhen Massalski).

What an awesome first-round matchup, as I’ll back the Racers purely based on being the more complete team with a stronger frontcourt.

I’m not quite sold on UCLA yet but just can’t see an upset here.

Akron got hot at the right time and snagged the MAC auto-bid from both Toledo and Kent State on their way to the tournament and I was shocked to see them get a No. 13 seed. They feel overseeded here and with the Bruins at eighth in KenPom, maybe they were slightly underseeded.

The talent gap is far too wide for me and Mick Cronin should have his guys well-prepared to cruise through this one.

Awesome win for Texas Southern on Tuesday night over Texas A&M-Corpus Christi, but the turnovers were far too many, as 15 giveaways in the win made for some sloppy basketball, and the Tigers will have no chance against Kansas if they keep that up.

Unfortunately, it has been a pattern all season for Texas Southern, as they rank 328th nationally in turnover percentage and I just don’t see a path for them to have any chance against the Jayhawks.