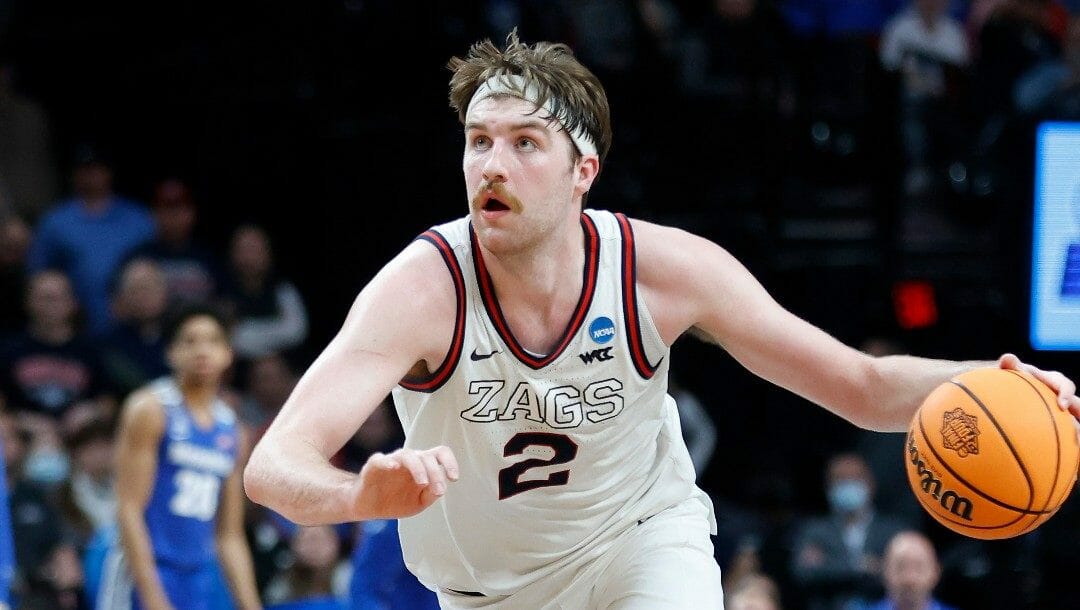 The first weekend of the NCAA tournament is in the books, and it was a good few days of college basketball betting.

After a few days off, the Sweet 16 will kick off Thursday night, which means now is a good time to take a look at the college basketball betting lines and dig deeper into the 16 remaining teams.

Some have better NCAA basketball championship odds than others, but a number of teams still have a chance to win the national championship.

This team is why we love the NCAA tournament. If someone tells you they saw Saint Peter’s making the Sweet 16 coming, they’re lying. They have now strung together two incredible performances, but they still remain far and away the worst team left in the field.

The high-powered offense of Purdue is up next and if the Peacocks can advance past them, this will be evolving into one of the biggest underdog stories in the history of sports.

The Cyclones are far from aesthetically pleasing, but this team will test you in every facet of your game. It was on full display in their upset win over Wisconsin where they completely baffled the Badger offense. They’ve got a favorable draw with Miami on Friday and their defense will keep them in any matchup if it plays the way it did on Sunday night.

One of the best performances so far in the NCAA tournament came from Miami in their upset win over Auburn. The Hurricanes used their backcourt superiority to their advantage by running small lineups as the backcourt trio of Isaiah Wong, Charlie Moore, and Kameron McGusty were far too much for the Tigers to handle.

I may be sleeping on Michigan here and I fear I may pay for it.

The Wolverines are playing their best basketball of the season but I can’t get over the inconsistencies of the regular season from this team. This is their first two-game winning streak in over a month and all I can sense is a poor performance on the horizon. They’ll need their A-game to get past Villanova on Friday.

The Friars have answered whatever has come their way this season but wins over South Dakota State and Richmond haven’t quite proven to critics that this team is for real. The guard play is capable of keeping up with top-seeded Kansas up next, but it will be a sizeable upset for them to pull this one off if you ask me.

I’m not sure what it is, but the Tar Heels have done something within the last month to figure things out because this is not what a No. 8 seed should be playing like.

They are capable of beating anybody in the country and proved it with their win over Baylor on Saturday despite nearly blowing a mammoth 25-point lead. UCLA is up next in what should be one of the best matchups in the Sweet 16.

Arkansas is more than capable of giving Gonzaga a game, but their lack of quality opponents to get here is what keeps them down on this list.

While Vermont and New Mexico State are both underrated teams, neither is on the level of almost every team remaining in the field. Standby on the Razorbacks.

The Cougars have silenced the doubters with a win over a solid UAB team in the first round followed by a big-time performance in the second round over Illinois.

Top-seeded Arizona will undoubtedly be the best team that Houston has faced all year and we’ll see if they are up to the task against the Wildcats on Friday.

UCLA’s win over Saint Mary’s was the most underrated victory of the second round.

Nobody is talking about it, but the Gaels are a legitimate team who had only lost by more than 10 points three times this season heading into that matchup. When the Bruins get their stars playing at their absolute best, they are as capable as anybody ahead of them on this list.

Purdue outlasted Texas and now are handed an absolute gift by the bracket Gods with No. 15 Saint Peter’s up next for a spot in the Elite Eight.

I still have serious concerns about the team’s defense, however, the Boilermakers will get a team that has serious offensive struggles which bode well for them. But stronger offenses down the road may be the biggest roadblock in the way of a national championship run.

Coach K’s farewell season lives on and he got some strong performances from all of his players with four starters scoring 15 points in their comeback win over Michigan State.

It was a serious test for the Blue Devils and they passed with flying colors when it came down to crunch time, something that was a concern following their home loss to North Carolina in the regular-season finale.

No. 11 Notre Dame almost pulled off a pretty hefty upset over Texas Tech in the Round of 32, but the Red Raiders held on and showed how they can win despite a poor offensive effort.

Shooting 35.6% from the field may not beat some of the opponents above them on this list no matter what, but the defense will keep them in nearly any game they play the rest of the way.

Head coach Jay Wright must love the spot he’s in.

A fifth-year point guard in Collin Gillespie, the best free-throw shooting team in the nation, and a starting five that can switch almost any matchup they want heading to the second weekend.

This team lacks some depth which may come into play from here on out, but the Wildcats have seven players who can all contribute from anywhere on the floor.

Ninth-seeded Creighton gave it all they could despite lacking their starting point guard and center, but the sheer talent and ability of Kansas’s key players brought it home in the Round of 32.

Shooting 19-for-20 from the free-throw line is brilliant, but they likely won’t always have performances like that from the charity stripe which means this may have been closer than the score indicates.

Providence awaits as the No. 1 seed hopes to secure a spot in the Elite Eight.

The Wildcats faced quite a scare late Sunday night but were able to eke out an overtime win over TCU on the back of a performance from Bennedict Mathurin that college basketball fans won’t soon forget. Up next is a matchup with No. 5 Houston who may not be so kind if they repeat their second-round performance, leaving head coach Tommy Lloyd with some work to do.

The Zags have had two games closer than most may have expected, but they are still the favorite in the field. It’ll only get harder from here, but the Bulldogs remain the best team in the country.