AFC Quarterback Rankings: Most Likely to Win a Super Bowl 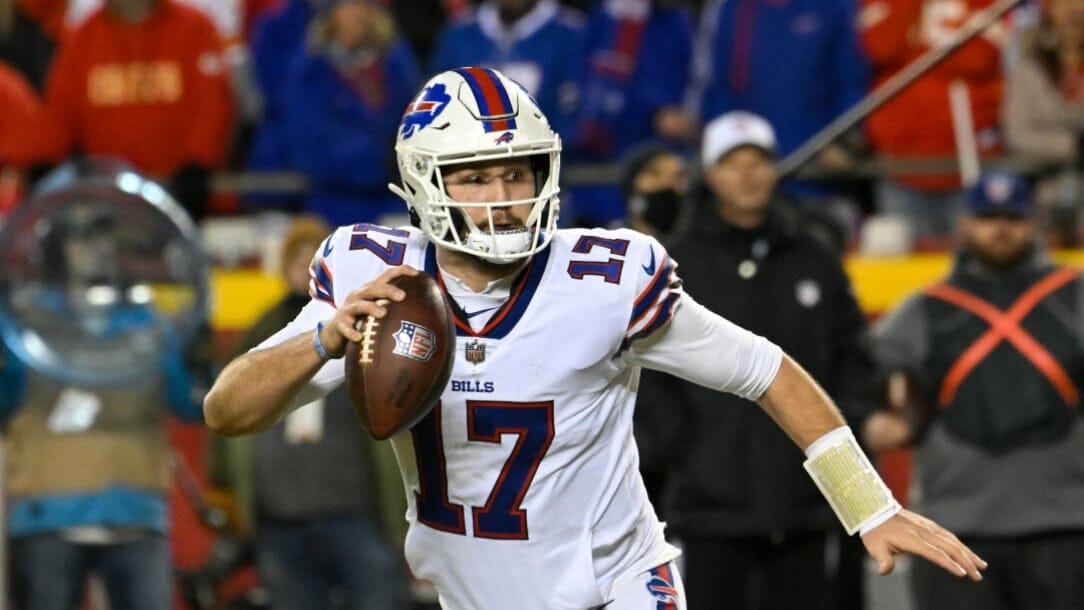 The AFC is littered with rising superstars at the quarterback position.

And while Patrick Mahomes is the only one wearing a Super Bowl ring, there’s a gluttony of talented, productive, decorated signal-callers capable of challenging Mahomes.

Lamar Jackson has an MVP trophy. Joe Burrow was one drive away from winning the first Super Bowl in franchise history. Ryan Tannehill led the Titans to the AFC Championship game. Mac Jones reached the playoffs as a rookie.

In fact, should Teddy Bridgewater return to the Denver Broncos, 13 of the 16 teams in the AFC could feature a former first-round pick under center — including three of the last four No. 1 overall picks.

Which quarterback is best positioned – with a combination of skills, coaching staff, and organizational competence – to track down Mahomes and win a Super Bowl ring?

Here’s a ranking of the 15 other quarterbacks, in order of most likely to win a Super Bowl:

Josh Allen is just 25 years old and the Bills already looked like a Super Bowl team in their instant classic with the Chiefs this past season. And they’re atop Super Bowl odds for next year.

Buffalo continues to build around Allen with fantastic depth and talent on both sides of the ball. Sean McDermott is among the league’s best coaches and this team’s ability to acquire and develop their roster makes Allen easily the top choice to join Mahomes on the NFL mountain top.

Joe Burrow was one possession away from not being eligible for this conversation.

He’s been a champion at every level, and there is no reason to think he and his stable of weapons won’t continue to be a factor every postseason. Zac Taylor seems more than capable of being a good NFL coach, so the only question is can he upgrade the defense enough to make one more stop?

Enormous individual skill paired with an organization that’s as stable and experienced as any in the NFL give Lamar Jackson one of the best chances to reach NFL immortality.

He’s still only 24 years old with elite upside and a 37-12 regular-season record to date. However, there are still subtle doubts about his ability to throw his team to wins in the playoffs. Jackson is 1-3 in the postseason with five interceptions and three touchdowns in those four starts.

Justin Herbert is clearly among the game’s most talented young players, and he was one drive away from getting the Chargers into the playoffs in 2021.

If the 23-year-old played for Baltimore, Buffalo, New England or Tennessee, he might be No. 1 on this list. However, he plays for an organization that likes to get in its own way. Settling on a coaching staff would be a good first step because if the talent on the sidelines or in the front office ever caught up with the talent of the quarterback, watch out.

The Titans have everything needed to make a Super Bowl run. The question: Can Ryan Tannehill, 33, be the guy to engineer it?

Tennessee has one of the best cultures in the game, led by NFL Coach of the Year Mike Vrabel and rockstar general manager Jon Robinson. This team also has Derrick Henry, a much-improved defense, and was the No. 1 seed in the AFC in 2021.

If Tannehill can fix his postseason issues and goes on a Joe Flacco-like run, Tennessee could easily win a Super Bowl.

Talk about being a product of your environment.

Mac Jones couldn’t have landed in a better spot and he capitalized by reaching the postseason as a rookie. The question is can New England evolve from a run-first, defense-first team to one that relies on its quarterback to make plays?

Jones will have to take on a bigger role in 2022 for the Pats to have a chance at making a run.

The Raiders made the playoffs and almost made it to the divisional round riding the right arm of Derek Carr.

There is one year left on his deal, and, with new coach Josh McDaniels stepping in, the future is difficult to predict. However, should Vegas decide to run it back with Carr, this organization has enough pieces to surprise.

Much has been made of Baker Mayfield’s relationship with the coaching staff as his future in Ohio is uncertain. That said, when he’s been healthy and focused, no one has accomplished more in a Browns uniform since Vinny Testaverde.

He’s only 26 years old and Kevin Stefanski seems like the right guy for the job. If there was more stability in Cleveland, Mayfield would fall in the “contender” category.

Carson Wentz is a total enigma. His numbers are really good and he almost won an MVP award in Philadelphia, but he plays small in big moments.

The Colts have a spectacular supporting cast along the offensive line, in the backfield, and on defense. The front office and coaching staff are more than adequate as well — Frank Reich has three winning seasons with three different quarterbacks in Indy. With that being said, too many mistakes and injuries will keep Wentz from contending for a Super Bowl.

Trevor Lawrence is a generational talent with every possible physical tool needed to win. But, woof, what a mess Jacksonville is at almost every position — on and off the field. This is the opposite of Jones and New England.

Tua Tagovailoa isn’t nearly as talented as Lawrence, and his organization is only mildly more stable than Jacksonville.

The Broncos are consistently better than a franchise on its fifth head coach in nine years. Teddy Bridgewater, 29, is a fantastic culture guy but is obviously very limited.

Zach Wilson has Brett Favre-like upside but makes tons of mistakes and, most importantly, plays for the Jets.

If an established starter lands in Pittsburgh, the Steelers could be an AFC front-runner. For now, though, it’s Mason Rudolph and his 10 career NFL starts.

If Deshaun Watson plays this year, he would be on par with Jackson and Herbert. But, facing 22 civil lawsuits, that’s a gigantic “if.”