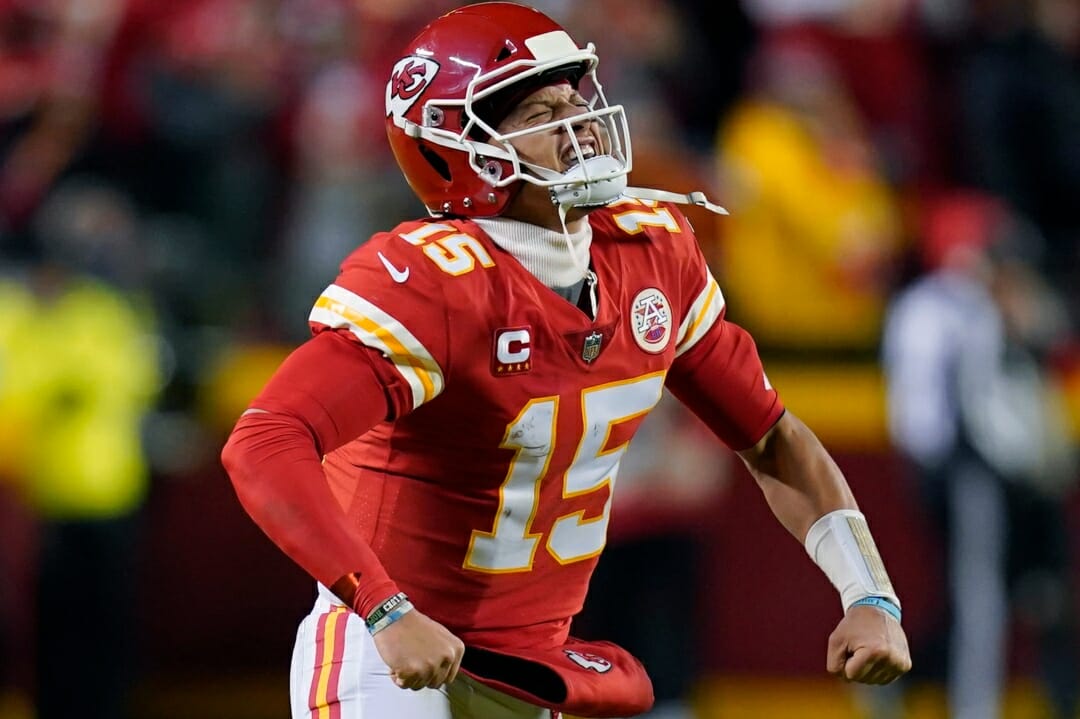 After one of the most exciting divisional rounds NFL fans have ever seen, we move on to the conference championship games. Bettors are already flocking over to BetMGM’s NFL betting odds to get an early look at what to expect in the games this weekend.

After analyzing both matchups, two wagers stand out to me for Sunday’s games. Below are my NFL best bets for the AFC and NFC Conference Championship games.

The Kansas City Chiefs are currently the Super Bowl favorites after back-to-back playoff performances, where their offense looked unstoppable. They’ve scored 84 points combined in their last two games while only punting six times.

Moving the ball has looked effortless for the Chiefs in the postseason, as they’ve tallied over 1,000 yards on offense and are averaging 7.5 yards per play.

Their success on offense can be attributed mainly to Patrick Mahomes and the passing game. The Chiefs are second in passing yards per game, and Mahomes has already thrown eight touchdown passes in the playoffs.

The Cincinnati Bengals are 26th in the league in passing defense, allowing 248.3 yards per game. I’ll be surprised if they can slow Mahomes down.

Cincinnati’s defense has looked better in the postseason, allowing only 35 total points through two games, but those were against the Las Vegas Raiders and Tennessee Titans. Derek Carr only ranks 15th in QBR, while Ryan Tannehill ranks 8th. In contrast, Mahomes ranks 5th in QBR and has averaged an incredible 82.0 QBR rating in the playoffs.

These teams also met earlier this season in Week 17. Although Kansas City lost that game by three points, they still put up 31 points, which is why I like this bet more than the Chiefs’ spread.

The Los Angeles Rams and the San Francisco 49ers will meet for the third time this season and the second time at SoFi Stadium in the NFC Conference Championship game.

Matthew Stafford hasn’t played well in the two teams’ previous matchups, throwing four interceptions. That seems to be what the 49ers’ defense does to quarterbacks, though. Last week, they held future Hall of Famer Aaron Rodgers to zero touchdowns and beat the Green Bay Packers at Lambeau Field with their stifling defense.

Although the Rams are sixth in the NFL in points scored, averaging 27.6 points per game, they’ve only been able to manage an average of 17 against the 49ers this year.

San Francisco has already shut down the Dallas Cowboys and the Packers in the playoffs, two of the most high-powered offenses in the NFL. The 49ers are sixth in passing yards allowed per game (207.2) and fifth in scoring defense (20.6 points per game). I expect more of the same in this game as they keep the score within 3.5 points.

How do you think the conference championship games will play out? Do you agree with my NFL best bets?

Whichever wagers you like, place your bets at the best online sportsbook, BetMGM. Sign up for an account today for a risk-free initial bet of up to $1,000.