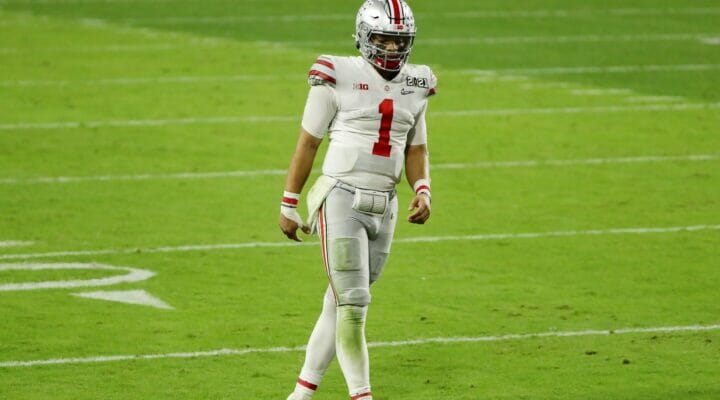 Quarterbacks have won nine of the last 17 NFL Offensive Rookie of the Year Awards. None of the nine quarterbacks won the award for standing on the sideline, as Justin Fields will do (for now) with the Chicago Bears, general manager Ryan Pace said on Thursday night after selecting Fields with the 11th overall pick in the 2021 NFL Draft.

“Andy [Dalton] is our starter, and we’re going to have a really good plan in place to develop Justin [Fields],” Pace said of Dalton, whom they signed to a one-year, $10-million deal in March. If Dalton remains the starter throughout the season, Fields won’t become the second Bears’ player to win Offensive Rookie of the Year (Anthony Thomas, 2001).

“I’ve gone through situations where I haven’t been chosen, and I think the world has seen the outcome of that,” Fields said after the draft, referencing Georgia’s decision to start Jake Fromm over him in 2018, prompting a transfer to Ohio State.

As of Friday, April 30, prior to the second round of the draft, Fields is ahead of two quarterbacks selected ahead of him – Zach Wilson and Trey Lance – and everyone else not named Trevor Lawrence:

Click here to view full odds for NFL awards, and listen to High Motor by BetMGM for more NFL discussion:

At BetMGM, you can bet on NFL futures, including Super Bowl odds, NFL win totals, and NFL MVP odds. With live betting, props, and parlays, the best online sports betting experience is at BetMGM.