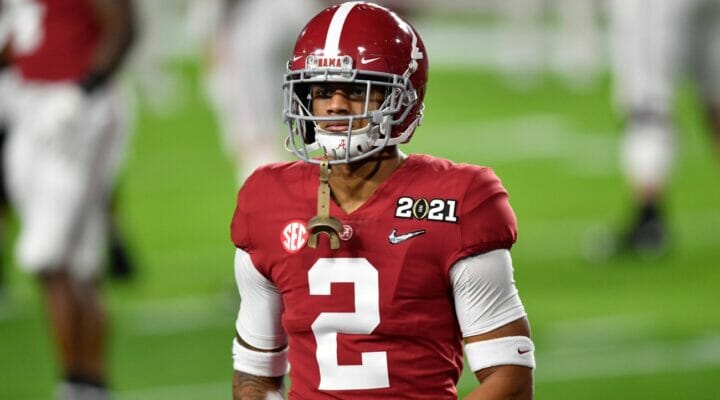 If you bet on Surtain, you’re probably hoping the Detroit Lions pass on a quarterback or receiver at No. 7, the Carolina Panthers pass on a second-tier offensive tackle at No. 8, or the Denver Broncos prefer Micah Parsons or a leftover quarterback at No. 9. But even if Surtain doesn’t go inside the top seven, eight, or nine picks, your bet could cash with the most offensive-heavy top 10 in more than 70 years.

One year after Bush became the seventh top-10 defensive pick, a defensive player wasn’t called in the 2018 draft until the Cleveland Browns selected Denzel Ward at No. 4. Ward was the first of three defensive players in the top 10, tying the fewest since 1995 and the second-fewest since 1982. But even in an offensive-heavy top 10, Ward and two others – Bradley Chubb and Roquan Smith – went in the top eight and three top-10 picks isn’t far off the 20-year average of 4.4 defensive selections in the top 10.

It was the 70th straight draft with at least one defender in the top eight. Not since Texas defensive end Max Bumgardner was the first defensive draftee in 1948 (No. 10, Chicago Bears) have defensive players been shut out of the top eight. And with quarterback- and pass-catching-needy teams at the top of this year’s draft, the streak might end at 70 years:

Surtain opened at +180 in NFL Draft odds to be the first defensive player drafted, only behind Parsons (-130). In climbing above Parsons, the 2020 SEC Defensive Player of the Year has been a public favorite. As of Friday, he was receiving 47.7 percent of the tickets and 68.6 percent of the handle. Only South Carolina cornerback Jaycee Horn was above 11 percent in either area.

The public might be right on Surtain; he might become the first Alabama player to be the first defender selected since Derrick Thomas in 1989. And unlike Thomas in 1989 – at No. 4, he was the first of five defensive players drafted in the top 10 – Surtain won’t need a top-five selection to do it.

Surtain might not need a top-10 selection to do it.

Listen to High Motor by BetMGM for more news and analysis on the NFL Draft, the NFL, and college football:

At BetMGM, you have access to dozens of NFL Draft Specials, including player props, team draft picks, and more. With live betting, parlays, and teasers, the best online sports betting experience is at BetMGM.