NFL Mock Draft: If Odds Dictated Each Pick in the 2022 NFL Draft 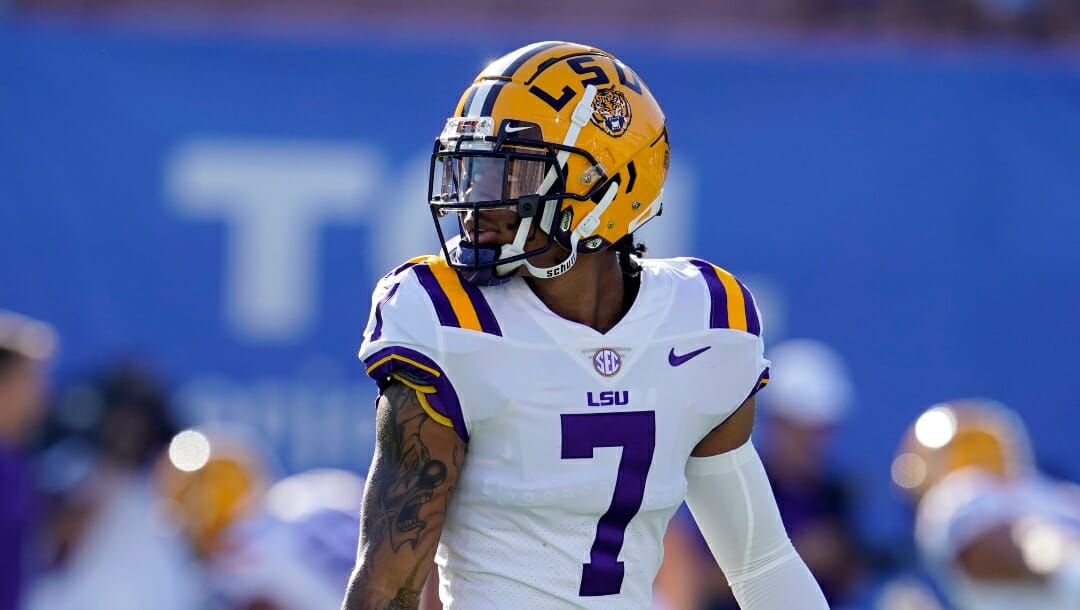 The NFL Draft anthem of “stick to the board” or a similar variation is repeatedly uttered throughout the draft season. And, according to repeated accounts from insiders and current/former team executives, teams that actually “stick to the board” have better success in identifying and developing talent.

What if “the board” was the NFL Draft odds board at BetMGM?

What would the first round of the 2022 NFL Draft look like if odds (as of April 27) dictated each pick?

There was no suspense with the No. 1 pick last year; Trevor Lawrence opened as the favorite, remained the favorite, and was selected by the Jaguars.

This year, Aidan Hutchinson opened as the favorite (+100) and remained the favorite until Monday, April 25, when Travon Walker jumped ahead of the Michigan edge rusher. And as of Wednesday, Walker’s odds are -225 to Hutchinson’s +200.

Hutchinson has always sat among the favorites in odds for the No. 2 overall pick. But when he fell behind Walker at No. 1, he became the clear favorite at No. 2.

At -200, Hutchinson is well ahead of Kayvon Thibodeaux (+250) and Walker (+550) to be selected second, presumably by the Detroit Lions, barring a shocking trade after the Dearborn, Mich., native falls to them.

Amid reports of the Houston Texans’ potential interest in Derek Stingley Jr. at No. 3, the former LSU cornerback has jumped Ahmad Gardner and everyone else in No. 3 overall pick odds.

Because BetMGM doesn’t have odds for the No. 4 pick (or any pick beyond No. 3), the order of operations goes to team odds, which have defensive lineman (+125) as the best odds for the position of the Jets’ first drafted player.

According to odds, the Giants will select an offensive tackle in the first round for the fourth time since 2014.

Offensive lineman (-110) is narrowly ahead of quarterback (+100) for the Panthers’ first selection, which pushes Evan Neal – the highest remaining player on the board for first offensive lineman selected – ahead of Malik Willis, the favorite to be the first quarterback selected in the draft at -155.

Wide receiver is a heavy favorite to be the position of the Falcons’ first pick (-125), which leads second-year general manager Terry Fontenot to another first-round pass-catcher after selecting Kyle Pitts last year.

And with Willis (-175) ahead of the highest-ranked offensive lineman – six players tied at +10000 – the Seahawks have a new quarterback.

Jermaine Johnson has the lowest over/under among defensive linemen (9.5), which is atop the Jets’ board for first position selected (+125).

The Jets have selected a defensive lineman in the first round three times since 2013 but all three players – Quinnen Williams, Leonard Williams, and Sheldon Richardson – were interior linemen. They haven’t drafted an end/edge rusher in the first round since Quinton Coples in 2012.

Ahmad “Sauce” Gardner falls into Washington’s lap after a top-10 run on offensive and defensive linemen.

Defensive back is the heavy favorite on the Vikings’ positional board (-110), leading them to Hamilton, whose over/under is lower than the other defensive back with over/under odds, Trent McDuffie (16.5).

There are odds for first cornerback selected but none for first safety selected, leading the over/under odds for all defensive backs as the tiebreaker.

Linderbaum is tied with five other players for first offensive lineman drafted but has the lowest (and only) over/under of them at 27.5.

Jordan Davis has been a popular pick of the Baltimore Ravens throughout mock draft season. And he lands in Baltimore thanks to a slim margin in Ravens’ positional odds (+150) and the lowest (i.e., only) remaining over/under among defensive linemen.

Five positions have odds of +600 or better on the Eagles’ board, led by wide receiver at +200, leading the Eagles to select a receiver in the first round for the third straight year. And for the second straight year, they select an Alabama receiver.

Kenny Pickett joins Archie Manning as the only quarterbacks drafted by the New Orleans Saints in the first round.

At +150, quarterback is ahead of offensive lineman (+225) and wide receiver (+350) on the Saints’ board. And with Willis headed to Seattle, Pickett is the selection ahead of Desmond Ridder and Matt Corral.

Instead of filling a major need at defensive tackle, the Chargers are forced to pick from the remaining offensive linemen.

Without remaining over/under odds for offensive linemen, Penning is the selection because he’s listed ahead of Bernhard Raimann, Daniel Faalele, Kenyon Green, and Zion Johnson in odds for first offensive lineman drafted.

The Eagles are forced to select Trent McDuffie because they already took a receiver (+200) and there are no defensive linemen (+225) listed in any markets, which breaks the tie with defensive back (also at +225).

Like the Vikings with Hamilton at No. 12, the Eagles draft McDuffie because he has the lowest (and only) remaining over/under (16.5) among defensive backs. He also sits atop odds for first cornerback taken (+2000) with Gardner (-145) and Stingley (+105) off the board.

Raimann is listed behind Penning and ahead of Faalele in offensive lineman odds, which the Saints are forced to pick from after taking a quarterback three spots earlier.

The 24-year-old former soccer player – who started his college career at Central Michigan as a receiver – will be the first Austrian in the NFL since kicker Ray Wersching in 1987.

Five positions have odds of at least +425 on the Patriots’ board, led by defensive back at +150. And with no remaining over/under markets for defensive backs, the Patriots must select from odds for the first cornerback selected.

The Patriots haven’t drafted a defensive back in the first round since Devin McCourty in 2010.

Wide receiver is the heavy positional favorite (-145) for the Packers, forcing them to take a receiver in the first round for the first time since Javon Walker in 2002.

And with only Garrett Wilson and Jameson Williams unavailable, the Packers land the third-ranked player in first receiver odds, Drake London (+250).

This one is messy:

The only real Arkansas receiver drafted in the first round is Lance Alworth, the eighth overall pick of the San Francisco 49ers in 1962.

The Buffalo Bills can’t draft Chris Olave at No. 25 because defensive back (+160) is atop their board for first position selected

And like the Patriots with Andrew Booth at No. 21, the Bills must take the highest remaining player from the cornerback odds. Kaiir Elam is the pick because he’s listed before Roger McCreary in that market.

The odds-only mock draft is a great mock for offensive linemen.

Johnson goes one pick later as the Tampa Bay Buccaneers look to replace Ali Marpet after the 2021 Pro Bowl guard announced his retirement in February.

After not selecting an offensive lineman in the first round from 2002-19, the Bucs would have two first-round offensive linemen in the last three drafts.

Linebacker is fourth-highest on the Packers’ positional board (+450) but they already took a receiver (-145) at No. 22 and there are no remaining offensive linemen (+400) or defensive linemen (+450) in any markets.

Devin Lloyd is the pick because he’s the only linebacker listed in any betting market.

Christian Watson becomes the first FCS receiver selected in the first round in 22 years as the Chiefs pick the former North Dakota State star with the first of two first-round picks.

And Roger McCreary is available after losing the tiebreaker to Elam from the cornerback market.

The Bengals are one of two teams without a positional market – the 49ers are the other – and therefore must select the player with the best remaining odds in their respective positional market.

As a result, Breece Hall, at -190 to be the first running back drafted – becomes the second first-round pick in Iowa State history.

Thirty picks after selecting Aidan Hutchinson, the Lions are back on the clock. And they make Josh Jobe the seventh cornerback drafted in the first round.