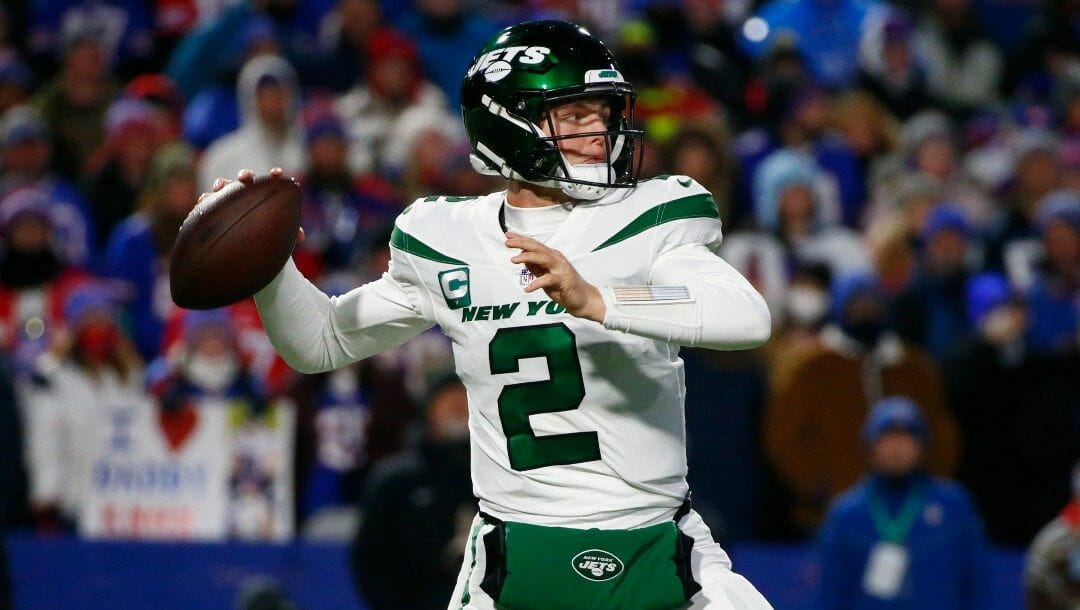 For the first time in a long time, there is renewed excitement surrounding the future of the New York Jets organization.

They currently have an over/under win total of 5.5 when it comes to NFL betting.

All four are expected to start Week 1 and bring a much-needed combination of talent and athleticism to a New York squad lacking in both areas.

Of course, the biggest storyline heading into the upcoming campaign is what to expect from sophomore quarterback Zach Wilson. The second overall pick in the 2021 NFL Draft, Wilson endured a tumultuous rookie season, throwing for just nine touchdowns across 13 starts while averaging a measly 6.1 yards per attempt.

However, it would be unfair to write off the former BYU star, as Wilson was impacted by injuries to starting wide receivers Corey Davis and Elijah Moore and playing behind a porous Jets offensive line.

That said, there will be no more excuses with Wilson surrounded by capable playmakers in Davis, Moore, Garrett Wilson, and Hall. The time has come for Wilson to show he has what it takes to be a franchise quarterback in what is potentially a make-or-break year.

Likely a year or two away from contending for a postseason berth, let us see what lies ahead for a Jets team that is expected to show marked signs of improvement in 2022.

The New York Jets open their regular season at MetLife Stadium for the second time in the past seven years. Unfortunately, they will be tasked with slowing down former league MVP Lamar Jackson, who is out to prove he still ranks among the game’s elite signal callers after an ankle injury limited him to playing in 12 of Baltimore’s 17 contests last season.

New York’s first road tilt of the season comes against a Browns team that may or may not have superstar quarterback Deshaun Watson.

The Jets are 13-14 all-time against Cleveland, with their last victory coming in December of 2020.

New York has won 10 of its last 11 meetings at home against the reigning AFC champs, including last year’s 34-31 upset victory on the arm of backup quarterback Mike White.

New York’s stretch of four straight AFC North opponents concludes with a trip to Pittsburgh and the new-look Steelers, who will not have quarterback Ben Roethlisberger at the helm (retirement). The last time the Jets faced Pittsburgh without him? You’d have to go back nearly two decades to December of 2003.

They are 6-20 lifetime against the Steelers.

The Jets have yet to defeat the Packers’ star quarterback and back-to-back MVP Aaron Rodgers (0-3). Is the fourth time the charm? New York’s defense will at least have the luxury of not having to contend with star wideout Davante Adams, who was traded to the Las Vegas Raiders this offseason.

Here’s a fun fact: In the Jets’ last 10 meetings with Denver, the Broncos have started 10 different quarterbacks. Russell Wilson will be the 11th.

The Jets were outscored last year by the Pats 79-19 in their two meetings, including Week 7’s 54-13 beatdown. New York has lost 12 straight games to Bill Belichick and Co., with its last victory coming in 2016. Does the streak finally end in 2022?

New York’s second straight divisional clash comes against the current Super Bowl favorite Buffalo Bills, who have downed the Jets in the past four meetings.

The Jets’ last victory in Foxboro came in the 2010 Divisional Round with Mark Sanchez at quarterback. That win still feels improbable to this day.

New York has dropped five consecutive meetings to the Bears, with its last victory coming in November of 2000 when it was led by then 36-year-old Vinny Testaverde. That said, with Chicago projected to be amongst the worst teams in football, there is a strong likelihood the Jets manage to pull this one out.

Zach Wilson and Co. travel to U.S Bank Stadium for the first time since it opened in 2016, a place where the Vikings are 31-17 (regular season).

The Jets likely will lose both meetings to the Bills this season. However, if they can keep this game close, it would be a solid moral victory for a team that will look to close out the final stretch of the regular season on a high note.

This game is the first of three straight winnable matchups for the Jets. That said, Detroit performed far better than last year’s 3-13-1 record suggests, as seven of its losses were by seven points or less.

Second-year quarterbacks Zach Wilson and Trevor Lawrence battle under the lights in the lone primetime slot for both sides. Wilson got the better of Lawrence last season as the Jets topped the Jags 26-21 at MetLife Stadium in Week 16. With both quarterbacks expected to take a step forward in year two, this game should be fun, even if it lacks playoff implications.

Russell Wilson is gone, meaning Geno Smith or Drew Lock should be under center. The Jets will likely be favored in this one.

The Jets close things out on the road for the sixth consecutive season.

Hard Rock Stadium has not been kind to New York over the years, with the Jets going 0-6 in front of Miami’s home crowd since 2016.