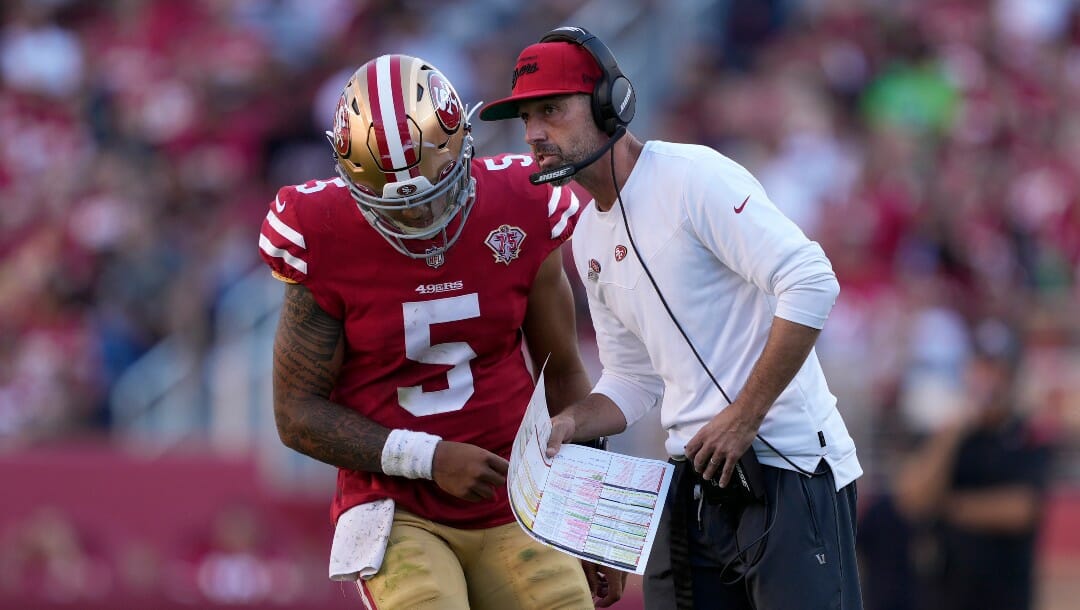 The 49ers are expected to turn to a young, inexperienced quarterback in Trey Lance this season. And yet, partly because of his potential and the roster around him, they are tied for the seventh-best NFL odds to win the Super Bowl at +1600.

Here’s a position-by-position look at the 49ers, who aim to improve after a run to the NFC Championship in 2021.

This placement is because of Lance’s potential, which is astronomical.

While at North Dakota State, and even in moments as a rookie in 2021, Lance illustrated he has the potential to become a standout NFL quarterback.

He also is in a great position. With an excellent defense, coaching staff and surrounding weapons, Lance should be able to live up to his third overall selection in last year’s draft.

The 49ers’ running back group featuring Elijah Mitchell is ranked No. 21 for the upcoming 2022 NFL season, with an overall grade of 62/100.

A great number of running backs could succeed in the 49ers’ offense. Though Mitchell was behind three others on the 2021 preseason depth chart, he capitalized when he was given more opportunities. He was 14th in DYAR and 19th in DVOA with 1,132 rushing yards last season.

The 49ers’ wide receiver and tight end group featuring Deebo Samuel, George Kittle and Brandon Aiyuk is ranked No. 7 for the upcoming 2022 NFL season, with an overall grade of 90/100.

Among wideouts last season, Samuel was 13th by DYAR as a receiver and first as a rusher. PFF graded him third for his offensive value among those at his position.

At tight end, Kittle is one of the best in the game when it comes to pass catching and blocking. He was seventh in DYAR and sixth in DVOA while graded third by PFF as he caught 71 passes for 910 yards and six touchdowns.

Aiyuk also makes this group stronger. He was 10th in DVOA and 15th in DYAR.

While the 49ers were among the top half of offensive lines in a few ways last season, they lost some crucial players. Alex Mack and Laken Tomlinson, who both started all 17 regular season games, are gone.

However, Trent Williams, the No. 1-rated tackle by PFF, and Mike McGlinchey return. They are capable of providing their team a boost on the edge.

Trent Williams in motion is not fair. #FTTB #NFLPlayoffs

In PFFs grades, the 49ers were fourth in pass rushing and sixth in run defense. They were second in adjusted line yards and fifth in adjusted sack rate.

San Francisco should be fine after finishing 15th in pass DVOA last season.

In PFF’s grades, Jimmie Ward was tied for 16th, and Talanoa Hufanga was 50th among safeties. For cornerbacks, Emmanuel Moseley was 34th, and former Chief Charvarius Ward was 24th.