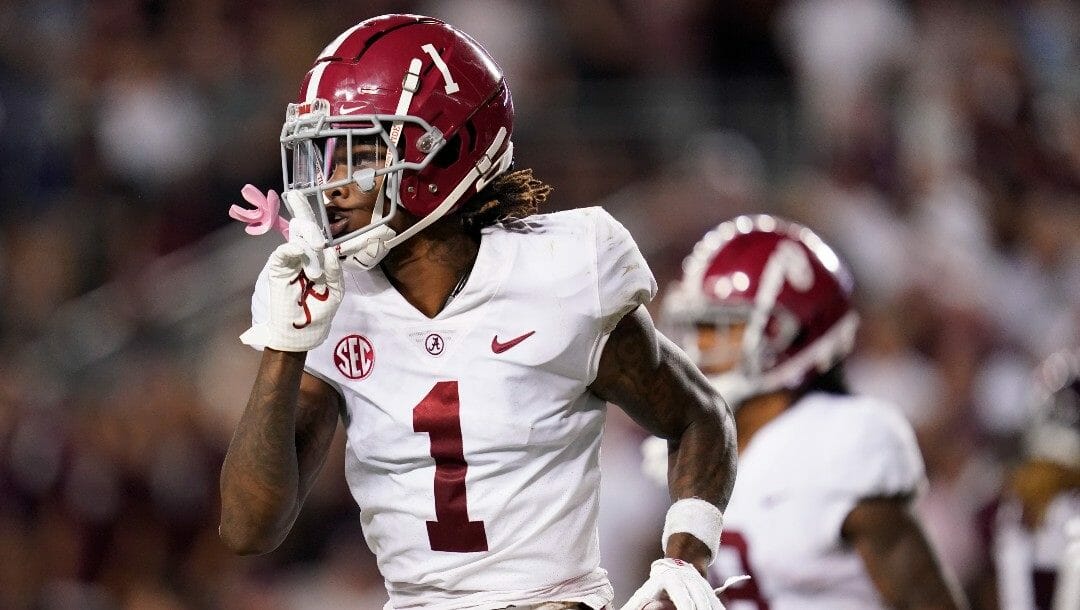 Even on the day of the NFL Draft, where players will be selected may not be clear until the moment picks happen.

But Over/Under NFL Draft odds projecting where players may land are still available.

The question, in this instance, isn’t what team a player will go to. It’s whether a player is deemed worthy of a top pick by any team.

Here are my favorite Over/Under picks.

(If you would like more insight on first-round prospects, my NFL mock draft is filled with pick projections, prospect analysis and betting odds.)

There’s no denying Jameson Williams’ talent. But questions remain about the former Alabama star’s health and the depth at wide receiver.

Williams, a first-team All-American, was highly productive in college. His speed and route-running will lead to him being a first-round pick.

But his ACL was torn in the College Football Playoff national championship, which could leave him out for the beginning of his rookie season. So teams picking at the beginning of the draft, usually desperate to turn their franchise around, may not have the patience to wait on Williams’ recovery.

And the list of receivers worthy of first-round picks is extensive.

Drake London, Garrett Wilson and Chris Olave all have legitimate cases to be the first receivers off the board, regardless of Williams’ health.

In my mind, the numbers don’t add up to Williams being taken before the 13th overall pick.

.@PFF_Mike does not believe Jameson Williams’ late season injury will affect his draft stock much.

Williams is currently +160 to be the first WR selected 🤔 pic.twitter.com/0vfrxldPCr

While this covers two different players, the argument for them is the same.

Liberty quarterback Malik Willis and Pitt quarterback Kenny Pickett are among a class of signal-callers widely regarded as less talented compared to other years. Both Willis and Pickett have their flaws.

Are they both skilled enough to be worthy of a top-13 selection? Probably not. But that won’t stop desperate teams from addressing the most important position in team sports.

The Lions, Texans, Panthers, Falcons and Seahawks are all teams with short-term solutions under center. Taking a developmental, long-term quarterback would make sense.

That also doesn’t factor in teams like the Saints and Steelers who also need help at QB and have the resources to trade up for one.

Simply out of need, teams may be risky enough to take Willis and Pickett early.

Most by an FBS QB 🎯pic.twitter.com/04Axo7d2oL

Georgia defensive tackle Jordan Davis could thrive in the right position. But his skill set, and therefore potential, is somewhat limited.

Davis was astounding as a run defender in college, helping the Bulldogs win a national championship. He was a two-time All-American.

And at 6-foot-6, 341 pounds with 34-inch arms, Davis dazzled at the NFL Combine. He was first among defensive tackles with a broad jump of 10 feet, 3 inches and was second-best at his position with a 4.78-second 40-yard dash and a 32-inch vertical.

But Davis didn’t display much as a pass rusher in college, which is a critical element for modern-day defenders up front.

Unless a team like the Vikings with a particular need for Davis’ abilities chooses him, the top five defensive ends in this draft may be more appealing for teams early on. That doesn’t leave much room for Davis to go in the first half of the draft.

The thing is, a team will need to value his position enough for a top-11 pick. And there are a few valid reasons why they wouldn’t.

First, there are other safeties out there that could boost a franchise. And they will likely fall to the top 10 picks in the second round. So if someone needs safety help, they could wait.

Second, the perception of safeties has evolved recently. So teams may not even deem any safety worthy of a top pick.

But Hamilton is. Several mock drafts, including mine, have had Hamilton going as early as No. 4 to the New York Jets.

Physically and mentally, Hamilton is poised to make an impact in the NFL immediately. Every team is seeking to defend the pass at a higher level, and Hamilton would help anyone do so.

This Kyle Hamilton INT looks unreal from the wide angle but the endzone view is my favorite. Watch him appear out of nowhere and eat up this ground! pic.twitter.com/7jm1lPA8WK

Washington’s Trent McDuffie is a fun player to watch who was productive and may even have the versatility to line up at different spots on the field.

McDuffie is talented enough to be drafted in the first round, potentially even early. But he’s widely regarded as, at best, the third cornerback prospect behind Cincinnati’s Ahmad “Sauce” Gardner and LSU’s Derek Stingley Jr.

Pro teams may also not love McDuffie’s size. At 5-foot-11, 193 pounds, he isn’t a perfect cornerback.

McDuffie could be good, perhaps even great, as a professional. But franchises may be willing to wait before picking him up.