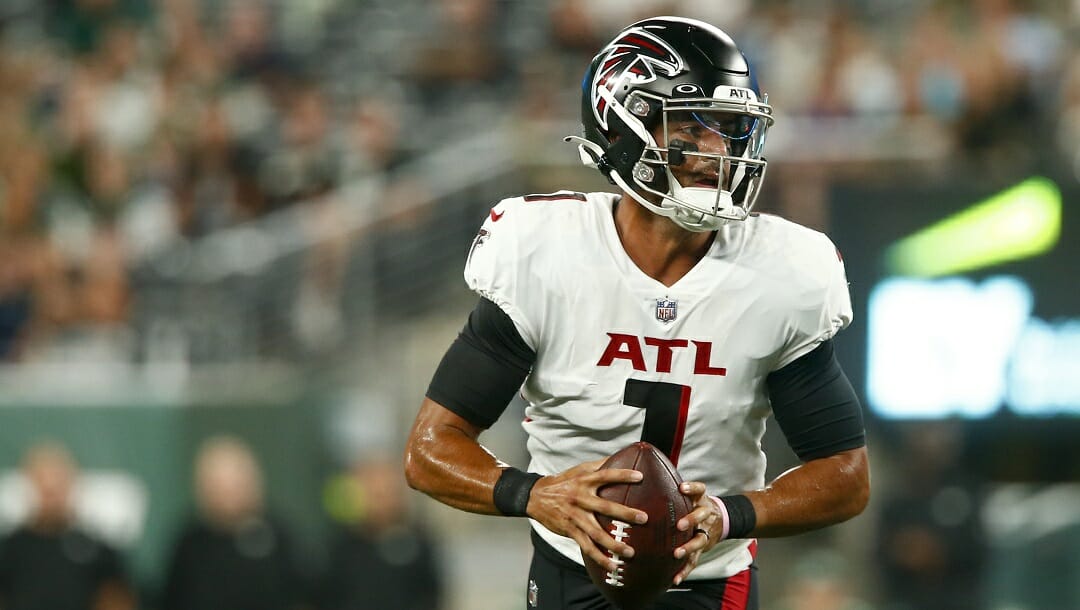 If you can name more than five Atlanta Falcons, then you’re probably already used to the disappointment (and the unimpressive NFL betting lines) that we expect to see from them this season.

After 14 seasons with Matt Ryan, the Falcons traded Matt Ryan to the Indianapolis Colts without a clear successor.

Although the team was able to sign Marcus Mariota, the former second overall selection hasn’t been a starter in the league since 2018.

That’s analogous to the franchise as a whole, with their patchwork roster not expected to contend for the foreseeable future.

The betting market is wise to the Falcons’ ineffectiveness, and that’s reflected in their Super Bowl odds, as they enter the season as +25000 longshots. Some parts may burn brighter than others, but these birds are cooked in 2022.

It would be impossible to write the entire squad off, and the Falcons do have several talented players that should help the team compete.

Kyle Pitts leads the way and should build off his tremendous rookie campaign in which he hauled in 61.8% of targets for 1,026 yards.

Granted, Pitts has a downgraded quarterback throwing him the ball, but we should continue to see elite metrics from the tight end.

Utilityman isn’t a term for football players, but it applies to Cordarrelle Patterson. The Falcons’ running back is deployed in several ways, making him a do-it-all option for the Falcons out of the backfield.

Last year, the four-time All-Pro led the team in yards from scrimmage and touchdowns and will once again be a featured player on offense.

We haven’t seen anything from him yet, but 2022 first-round pick Drake London comes into the season with lofty expectations.

Even though their quarterback will limit the Falcons’ offense, the wide receiver gives Atlanta a legitimate three-headed attack on offense.

Linebacker Deion Jones has emerged as a stalwart on defense. He can’t single-handedly shut down opponents, but he does elevate the team every time he’s on the field.

Here’s where things take a turn for the worse.

Atlanta lost their leading tackler Foyesade Oluokun and sack leader Dante Fowler, failing to fill those holes with established NFLers after they left.

The Falcons were already one of the worst defenses in the NFL, giving up the eighth-most yards and fourth-most points.

Without replacement players in the queue, things will worsen for the once-proud NFC South contenders.

Things are going to get messy for the Falcons this year. Not only are they dealing with a lackluster roster, but they’ll do so with one of the most challenging strengths of schedule.

Atlanta’s opponents had a combined .524 winning percentage last year, the ninth-toughest in the NFL.

The Falcons play against the AFC North and NFC West, taking on some top-ranked competitors.

Moreover, when the league added a Week 18, the matchup would be a non-conference opponent, which the team wasn’t scheduled to play.

In this case, the Falcons get to take on the Los Angeles Chargers, who sit near the top of the futures board and enter the campaign as legitimate Super Bowl contenders.

It will be an ugly season for the Falcons, and wins will be hard to come by.

There’s no easy way to put this, but the Falcons’ season will be disastrous.

A limited number of talented players won’t help the team win, with the Falcons lacking contributors in virtually every position.

Those roster issues will be compounded by a demanding schedule that features some of the best teams in the league.

Atlanta could very well be picking first overall in the 2023 NFL Draft. But hey, at least it’s something to look forward to.