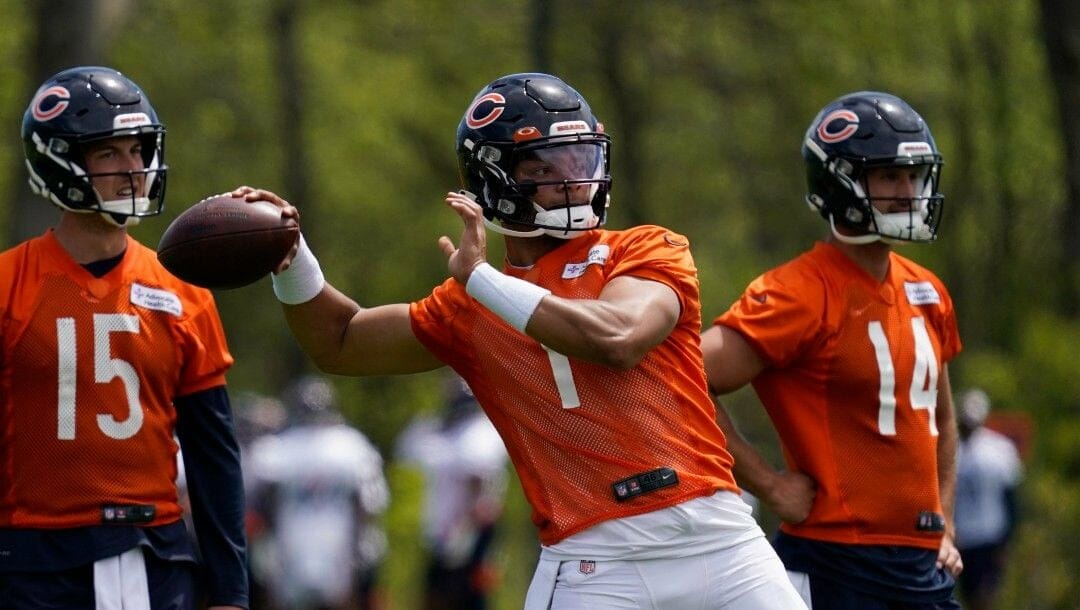 Matt Eberflus is in his first year coaching the Chicago Bears. And the roster has plenty of issues to address.

Here’s a position-by-position look at the Bears, whose NFL odds to win the Super Bowl are +10000.

Between not being the Day 1 starter and injuries, Fields was on the field inconsistently. His play matched.

Fields was 31st in DYAR and 32nd in DVOA in 2021. He still has plenty of improvements to make.

Still, he occasionally showed flashes of brilliance. His abilities as a passer and runner could shine with a revamped offense.

Some 2021 #Bears stats: Justin Fields led the league in average completed air yards last season (7.1), per @NextGenStats. That's while being 32nd in time to throw.

On that note, the Bears were last in adjusted sack rate, per @fboutsiders.

The Bears’ running back group featuring David Montgomery and Khalil Herbert is ranked No. 17 for the upcoming 2022 NFL season, with an overall grade of 71/100.

Montgomery was 43rd in DYAR and DVOA last season on 849 yards, but he still provides a stable presence for the Bears’ offense. Herbert, however, was a pleasant surprise as a sixth-round rookie as he was 13th in DVOA, 27th in DYAR and was graded sixth by PFF.

The Bears’ wide receiver and tight end group featuring Darnell Mooney and Byron Pringle is ranked No. 30 for the upcoming 2022 NFL season, with an overall grade of 58/100.

Mooney can be an electrifying receiver when he’s playing with a consistent quarterback, which hasn’t happened too often. In 2021, he caught 81 passes for 1,055 yards and four touchdowns. He was graded 38th by PFF at his position.

The Bears signed Pringle, a former Chief who was second in DVOA and 17th in DYAR last season with 568 receiving yards. They also drafted Velus Jones Jr. in the third round. Cole Kmet is expected to be the Bears’ starting tight end.

The Bears were 23rd in adjusted line yards and last in adjusted sack rate. None of their projected starters were better than 30th at their respective positions in PFF’s grades.

The Bears had the best adjusted sack rate in the league last year, but their adjusted line yards were 20th. The Bears’ run defense was graded 31st by PFF, while their pass rush was 15th.

While Khalil Mack is gone, Robert Quinn was a big reason for that effective pass rush, as he was second in the league with 18.5 sacks. Roquan Smith is also a top-notch linebacker.

While the Bears were 12th in pass DVOA last season, it seems they’ll be dealing with varying levels of experience in their starting lineup. Cornerback Kyler Gordon and safety Jaquan Brisker were drafted in the second round.

Former Pro Bowler and All-Pro Eddie Jackson provides some stability, but he was 69th in PFF’s grades at the position. Jaylon Johnson, another cornerback, was 57th.