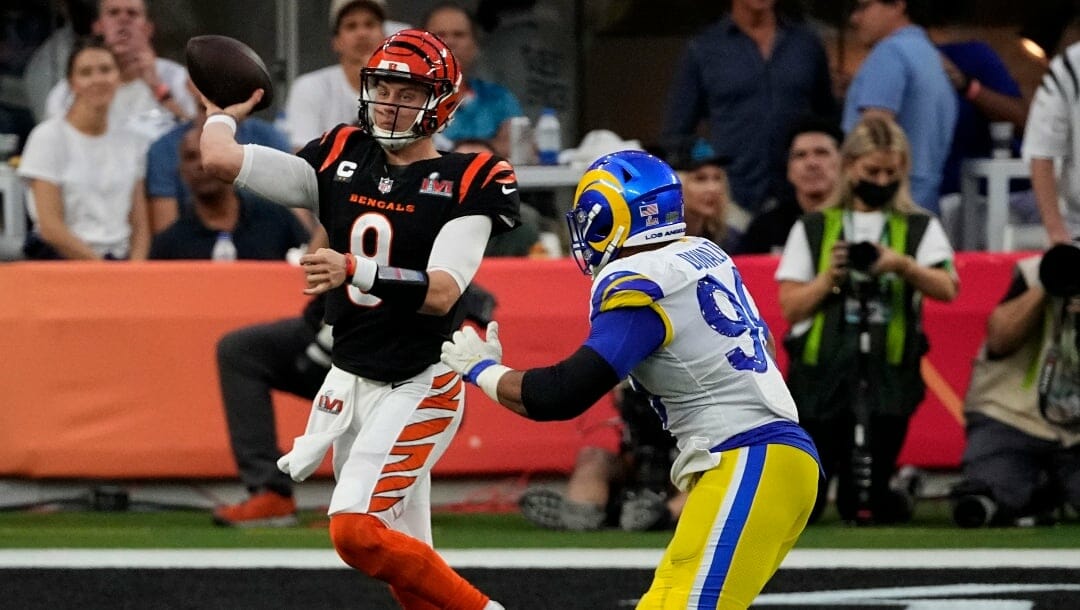 Joe Burrow helped power the Bengals to the Super Bowl last season, but they ultimately fell short against the Rams. So they’re looking to take that one last step forward in 2022.

Here’s a position-by-position look at the Bengals, who have NFL odds to win the Super Bowl at +2000.

Burrow was integral to the Bengals’ Super Bowl run last season. But while he succeeded in the playoffs, he was also superb in the regular season. He was rated PFF’s No. 1 passer in 2021. He was 13th and 14th in DYAR and DVOA, respectively.

His anticipation at his age is the most astounding part of Burrow’s game. Though he’s young, he knows how to maneuver in the pocket.

With upgrades on the offensive line, Burrow may be in a position to finally show how good he can be if given the chance.

Some 2021 #Bengals stats: Joe Burrow was 2nd in the NFL behind Aaron Rodgers in passer rating (108.3). He was also first in completion percentage above expectation, per @NextGenStats.

The Bengals’ running back group featuring Joe Mixon is ranked No. 15 for the upcoming 2022 NFL season, with an overall grade of 74/100.

Mixon was one of the top rushers in the league last season, but he wasn’t overly efficient. He was 24th in DYAR and 32nd DVOA, and he was graded 12th by PFF. Still, his career-high 1,205 yards during the regular season was third.

With Samaje Perine as his backup, Mixon still gives the Bengals an above-average presence at running back.

The Bengals’ wide receiver and tight end group featuring Ja’Marr Chase, Tee Higgins and Tyler Boyd is ranked No. 1 for the upcoming 2022 NFL season, with an overall grade of 98/100.

The Bengals’ run to the Super Bowl was largely because of their arsenal of weapons at wide receiver.

Chase set multiple rookie records on his way to 1,455 yards and 13 touchdowns on 81 receptions. He was sixth by DYAR and 11th by DVOA.

Higgins was slightly more efficient, though, according to DYAR (fifth) and DVOA (fourth) on his way to 1,091 yards and 74 catches with six touchdowns. Boyd chipped in 828 yards, 67 receptions and five touchdowns. The Bengals signed tight end Hayden Hurst this offseason.

The Bengals made considerable upgrades up front during the offseason and may deserve to be ranked even higher depending on how well the new players mesh.

The Bengals were ninth in adjusted line yards and 19th in adjusted sack rate. Their pass rush was graded 12th and their run defense was 23rd by PFF.

But they have some impressive stars to turn to up front. That includes DJ Reader, PFF’s ninth-highest graded interior D-lineman, and Trey Hendrickson, who was fifth in the NFL with 14 sacks last season.

The Bengals’ safety tandem is solid. Vonn Bell tied for 21st and Jessie Bates III was graded 38th via PFF. They also drafted Dax Hill in the first round this year.

The Bengals were 24th in pass DVOA last season. Chidobe Awuzie was 16th in PFF’s grades of cornerbacks.