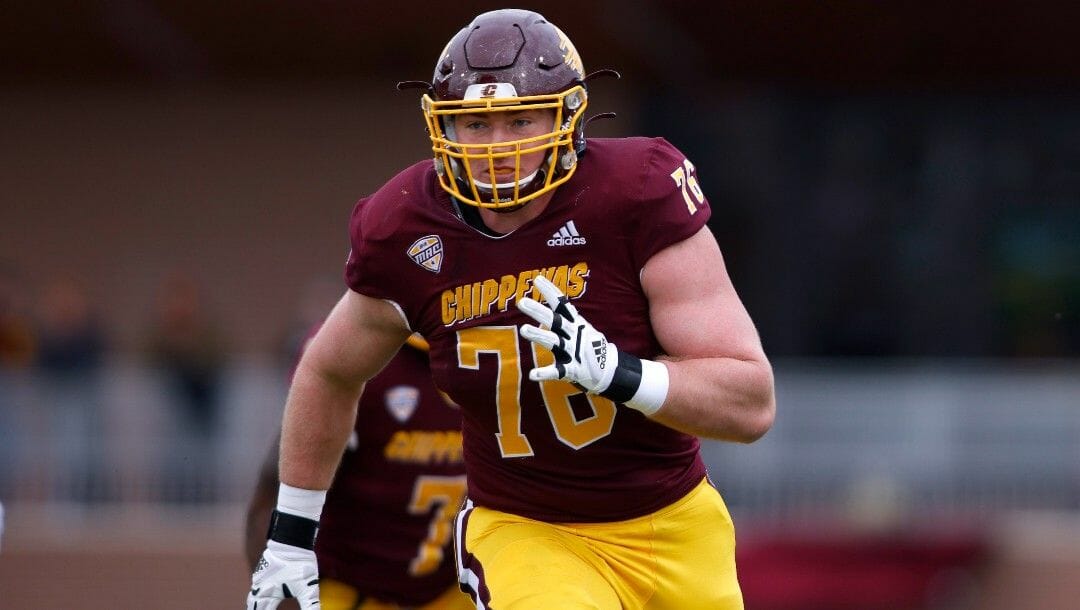 Forcing his opponent back on his heels, Bernhard Raimann then ensured the defender across from him had no chance of making a play.

Central Michigan running back Lew Nichols III ran to Raimann’s side in a clash with Missouri. The Chippewas left tackle, who’s among the premier prospects at his position in this year’s NFL Draft, had stood up defensive end Chris Turner at first.

But when Nichols neared, and Turner was within reach of the ball carrier, Raimann flattened the defender.

Raimann possesses a uniquely high upside as a prospect.

Raimann has the sixth-best NFL Draft odds to be the first offensive lineman selected at +5000.

Michigan defensive end Aidan Hutchinson has the leading NFL Draft betting odds to be picked first at -250 as of April 4.

The Tennessee Titans could use offensive line assistance if they decide to stick with Ryan Tannehill at quarterback.

While the Titans were 12th in run blocking last season, according to Pro Football Focus, they were 27th in pass blocking. Football Outsiders’ adjusted line yards rushing metric had them 16th, but they were 26th in adjusted sack rate.

The Titans need more help at tackle beyond that. Via PFF, Taylor Lewan was 50th among offensive tackles last season for the team. David Quessenberry was next for Tennessee at 81st, but he’s a free agent.

Raimann could play at the tackle spot opposite of Lewan and upgrade Tennessee’s balanced offensive scheme.

Bernhard Raimann punishing a jumper… Those are the rules! @BrandonThornNFL pic.twitter.com/GdwTUpeARX

Raimann’s journey to a professional offensive lineman prospect is a fascinating one.

Raimann, a native of Steinbrunn, Austria, was a forgein exchange student in high school, where he competed in football, wrestling and track and field. Then he played tight end at Central Michigan.

Then he moved to left tackle before a pandemic-affected 2020 season. He started six games and received All-MAC honors.

In 2021, his final college season, Raimann was the MAC Offensive Player of the Year and a Pro Football Focus first-team All-American. With more time at the position, Raimann may only continue to develop.

Raimann consistently showed solid footwork and technique in his short time at tackle.

He usually kept his base wide and his hands on the middle of defenders’ chests. When his hands were out of place, even as those across from him were seeking to shove him on his back, he readjusted and kept fighting.

And while he played in the MAC, he faced off with SEC teams and still thrived.

In a game with LSU, he was in charge of blocking the defensive end. But then when a defensive tackle went around the edge, Raimann immediately shuffled over and took care of it. This afforded his quarterback enough time for a completion deep downfield.

Raimann wasn’t always on-point with his recognition of blitzes and stunts, though. He also doesn’t always keep his feet firing at the point of attack in the run game.

However, this surely could be cleaned up with NFL coaching and more time at the position.

At 6-foot-6, 303 pounds, Raimann could also help himself with lower leverage, as he seemed to be outpowered on bull rushes. But he possesses the explosiveness to win in those aforementioned situations.

He was fourth among offensive linemen at the NFL Combine, though, as he benched 225 pounds 30 times. He also was third with a broad jump of 9 feet, 9 inches, and tied for sixth with a 30.5-inch vertical jump.

Raimann also is fast laterally. He isn’t easily defeated around the edge. This trait was shown with a 4.49-second 20-yard shuttle (fifth) and 7.46-second three-cone drill (eighth). He ran the 40-yard dash in 5.05 seconds.

Last season against Missouri, Central Michigan called for a wildcat quarterback run. The instant the shotgun snap was caught, Raimann was already on to the second level.

Linebacker Blaze Alldredge had the initial inside leverage. However, Raimann pushed him out of the way from his tackle spot, clearing a path for a first down.

Where there were threats to Central Michigan’s success, Raimann wiped them out. He would continue to do so for a pro team.