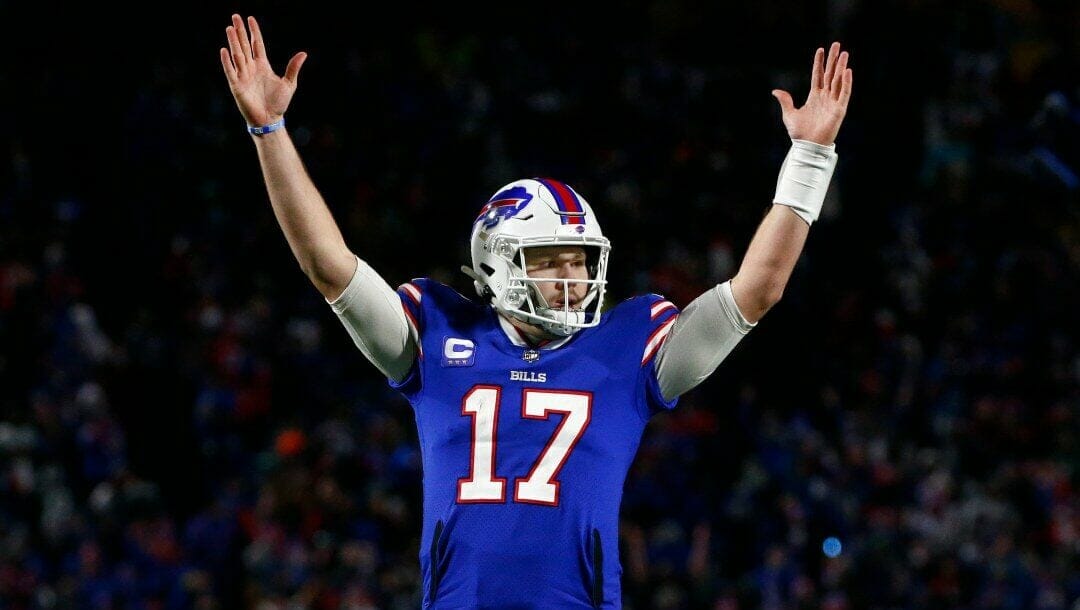 Buffalo Bills fans have likely run out of superlatives to describe last season’s heartbreaking Divisional Round loss to the Kansas City Chiefs. Josh Allen and company were 13 seconds away from advancing to their second-straight AFC Championship Game.

As gut-wrenching as that defeat might have been, the Bills reloaded in the offseason and enter the upcoming campaign as NFL futures odds favorites to win the Super Bowl (+600).

To that end, Buffalo was awarded the maximum of five primetime games, with matchups against the Los Angeles Rams, Tennessee Titans, Green Bay Packers, New England Patriots, and Cincinnati Bengals.

Josh Allen is a man of the “little” people #Kids #BillsMafia pic.twitter.com/6w7AsZ99IN

In what is truly a new era of Bills football, here is Buffalo’s 2022 regular season schedule.

The Bills and Rams kick off the 2022 regular season in what should be an exciting opening tilt.

Buffalo’s home opener comes against a Titans squad that edged the Bills 34-31 last season. Tennessee running back Derrick Henry has run for 278 yards and six touchdowns in his last three games against Buffalo.

The Bills square off against Tyreek Hill and the new-look Miami Dolphins. Hill and fellow wideout Jaylen Waddle present a stern test for a Buffalo secondary that is likely to be without All-Pro cornerback Tre’Davious White, who continues to recover from last year’s torn ACL.

Lamar Jackson and Co. were ravaged by injuries last season. Now healthy, the Ravens should again be a contender in the AFC and a team Buffalo cannot take lightly.

Pittsburgh stunned the Bills 23-16 in Week 1 of last season. While Steelers head coach Mike Tomlin has yet to announce a starting quarterback, all signs point to former Buffalo QB Mitch Trubisky being under center.

One of the most highly-anticipated games on the entire schedule. This rematch needs little explanation.

Josh Allen vs. Aaron Rodgers in primetime? NFL fans will take that any day of the week.

Buffalo swept New York last season, outscoring the Jets 72-27 over the two contests. While Robert Saleh’s squad should be much improved following a strong offseason, the Bills will be heavily favored.

Bills star wideout Stefon Diggs battles his old team for the first time since being acquired by Buffalo in 2020. Diggs and Minnesota’s Justin Jefferson make for an exciting receiver duel.

As things currently stand, the Browns will have quarterback Deshaun Watson under center. However, with the NFL appealing Watson’s initial six-game suspension, a Jacoby Brissett-led Cleveland squad remains a possibility.

For the third time in four seasons, the Bills will be a part of the NFL’s annual Thanksgiving Day slate. Buffalo battles a Detroit Lions team that performed far better than last year’s 3-13-1 record suggests and should take another step forward in their second season under head coach Dan Campbell.

The Bills have won four of the past five meetings, including last season’s 47-17 shellacking in the AFC Wild Card round. An important divisional matchup nonetheless, particularly this late in the year.

Buffalo hosts the Jets in the Bills’ first divisional home game of the season. It’s challenging to see Sean McDermott’s squad letting this one get away.

A potentially crucial divisional showdown with a Dolphins team that is expected to be right in the thick of the AFC playoff race.

Chicago is in full-on rebuild mode. A must-have for the Bills, who will likely be battling for the AFC’s No.1 seed and a first-round bye.

Buffalo’s final primetime outing of the season comes against Joe Burrow and the Cincinnati Bengals in a potential AFC Championship Game preview.

Assuming both teams still have something to play for, Bills fans would love nothing more than to put a dent in New England’s playoff hopes.