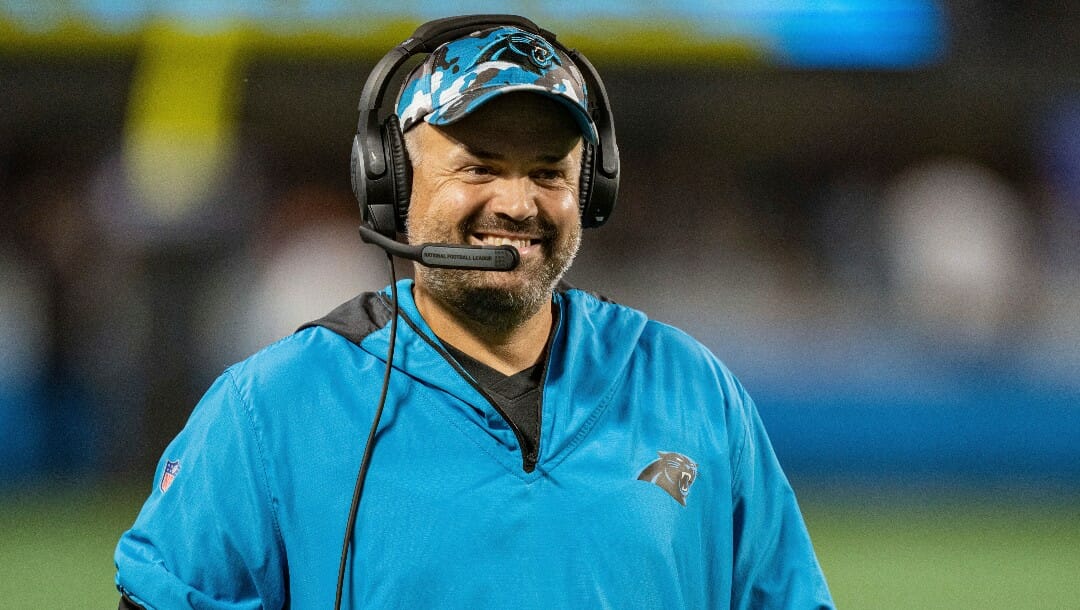 Through Week 5 of the NFL season, the Panthers went 1-4. Since Matt Rhule became the team’s head coach in 2020, the Panthers were 11-27 and didn’t finish a season with more than five wins.

Panthers defensive pass game coordinator and secondary coach Steve Wilks, a former head coach of the Arizona Cardinals, is the interim head coach at Carolina. But after this season, who are potential fits to lead the Panthers in 2023?

Bieniemy has been in the mix with almost every team that has needed a head coach in the last few years. In fact, he spoke with the Panthers when they were hiring back in 2020.

The Chiefs are once again explosive on offense thanks to players like quarterback Patrick Mahomes, tight end Travis Kelce and their elite offensive line.

Mahomes and Kelce are No. 1 in the league in DYAR at their respective positions, per Football Outsiders. The Chiefs are also first in total offensive DVOA.

Bieniemy was crucial for this offense developing. As a result, the Panthers will probably consider him once again.

this is one way to beat Cover 2. Just have Patrick Mahomes throw a 40 yard frozen rope. pic.twitter.com/wCgqBcp1Mq

The Eagles have been one of the biggest surprises of the 2022 season. That’s in large part because of their defense.

The Eagles are fourth in the league in total defensive DVOA and second in pass defense DVOA. They also allow the fourth-fewest yards per game (297.8).

Gannon has been a potential head coaching candidate since last year and was a sought-after defensive assistant before joining the Eagles in 2021.

After Rhule’s tenure, it wouldn’t be surprising for the Panthers to go with a defensive coach. Especially in light of the Eagles’ recent successes, 39-year-old Gannon is a name to watch.

THE EAGLES DEFENSE IS ALL OVER CARSON WENTZ‼️

Six sacks and it's only the first half 😳

After failed head coaching tenures, NFL teams often hire a replacement who is unlike the predecessor. That’s why four defensive coordinators are on this list.

Ryans has worked his way up the rankings of the 49ers coaching staff, coaching inside linebackers from 2018-20. He’s been the team’s DC since 2021.

The 49ers are seventh in total defensive DVOA and allow the third-fewest yards per game at 294.9. This team is stout, especially up front, and is clearly well-coached.

Ryans is a promising young coach at 38 years old, so the Panthers may be a good fit.

Morris is one of two on this list who have been NFL head coaches before. And I think another stint would be good for Morris and the Panthers.

Morris is 21-38 as a head coach, but he’s proved in LA he can still lead a team to success. The Rams were top five in total defensive DVOA last season on their run to a Super Bowl.

Morris is smart and, at 46 years old, still young enough to be a successful head coach. He could help turn around the culture of the franchise in a positive way as the Panthers likely aim to go on a long-term rebuild.

Raheem Morris LOVING the Rams' defense while on the broadcast 😂

If the Bills continue to play well defensively, despite their injuries, it would be shocking if Frazier didn’t receive interest again as a head coach this offseason.

The Bills were first in total defensive DVOA last year. And even though multiple Pro Bowl-level defensive backs have missed games, they’re No. 1 in DVOA again this year.

Frazier was 21-32-1 as the Vikings’ head coach from 2010-13. But he’s been so successful as a defensive coordinator again, he deserves another shot.

Frazier could receive even more attention if the Bills win a championship. Buffalo is the Super Bowl odds favorite at +275 as of Oct. 26.

The Athletic wrote that Cowboys defensive coordinator Dan Quinn, former Saints head coach Sean Payton and former Dolphins head coach and current Steelers senior defensive assistant and linebackers coach Brian Flores are also strong candidates for Carolina’s head coaching job. But perhaps the Panthers won’t be the only team some of these candidates consider with other head coaches being on the hot seat.

VON MILLER SACK. FOOTBALL IS BACK.