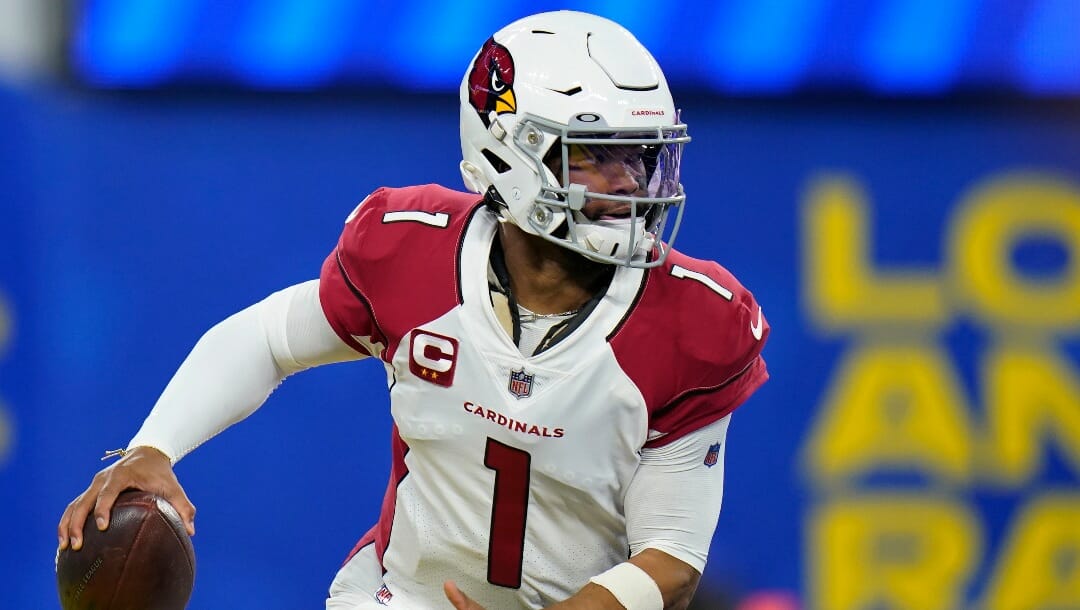 The Cardinals reached the playoffs in 2021 but lost in the Wild Card round to their division rival and the eventual Super Bowl champion, the Rams. With Kyler Murray at quarterback, Arizona hopes to build on last season’s success.

Here’s a position-by-position look at the Cardinals, whose NFL odds to win the Super Bowl are +3000.

Leaving Murray out of the top 10 wasn’t an easy decision. He certainly has a case for it, though he didn’t finish the 2021 season as well as he could’ve.

Murray’s DYAR was ninth last year, and his DVOA was seventh. He was also PFF’s fifth-highest-rated passer last season.

The Cardinals will be without DeAndre Hopkins to start the season, but they added Marquise Brown. With another year of development, Murray will still have a chance to cement himself as a top-10 QB.

Kyler Murray was also second in the league in completion percentage above expectation, according to Next Gen Stats.

The Cardinals’ running back group featuring James Conner is ranked No. 30 for the upcoming 2022 NFL season, with an overall grade of 48/100.

While Conner rushed for 752 yards and 15 touchdowns, he was 23rd in DYAR and 28th in DVOA last season. Conner, who also has an injury history, may not even replicate his 2021 production.

If Conner does miss time, the Cardinals would be forced to turn to Darrel Williams and/or Eno Benjamin.

The Cardinals’ wide receiver and tight end group featuring DeAndre Hopkins, Marquise Brown and AJ Green is ranked No. 17 for the upcoming 2022 NFL season, with an overall grade of 75/100.

The Cardinals are knocked back a few spots as Hopkins will miss six games due to a suspension. But when he’s back, he’ll continue to be a dynamic threat as he was seventh in DVOA and 19th in DYAR last season.

The Cardinals expect Brown to shine after trading a first-round pick for him. While he was 81st in DYAR and 78th in DVOA, he was still one of 26 1,000-yard receivers last year with 1,008 on 91 catches to go with six touchdowns.

Green, who was 28th in DYAR and 33rd in DVOA, and tight end Zach Ertz, who tallied 763 yards, 74 catches and five touchdowns in 2021, will be other solid targets for quarterback Kyler Murray.

The Cardinals also return four players who started at least 12 games up front, none of which were younger than 28. While DJ Humphries made the Pro Bowl last year, he was graded 49th by PFF.

Neither center Rodney Hudson or guard Justin Pugh ranked higher than 32nd in PFF’s grades at their position. Projected starting guard Will Hernandez and tackle Kelvin Beachum weren’t higher than 60th at their respective positions.

The Cardinals were 15th in adjusted sack rate and 17th in adjusted line yards. Their run defense was 21st, and their pass rush was ninth in PFF’s grades.

As the former All-Pro played just eight games last season, JJ Watt’s health will be pivotal in this unit’s production.

Budda Baker, a four-time Pro Bowler and two-time All-Pro, helped the Cardinals take fifth in pass DVOA last season. But by PFF’s grades, no one in the secondary excelled.

No Cardinals cornerback was in the top 50 of PFF’s grades, and no safety was among the top 35.