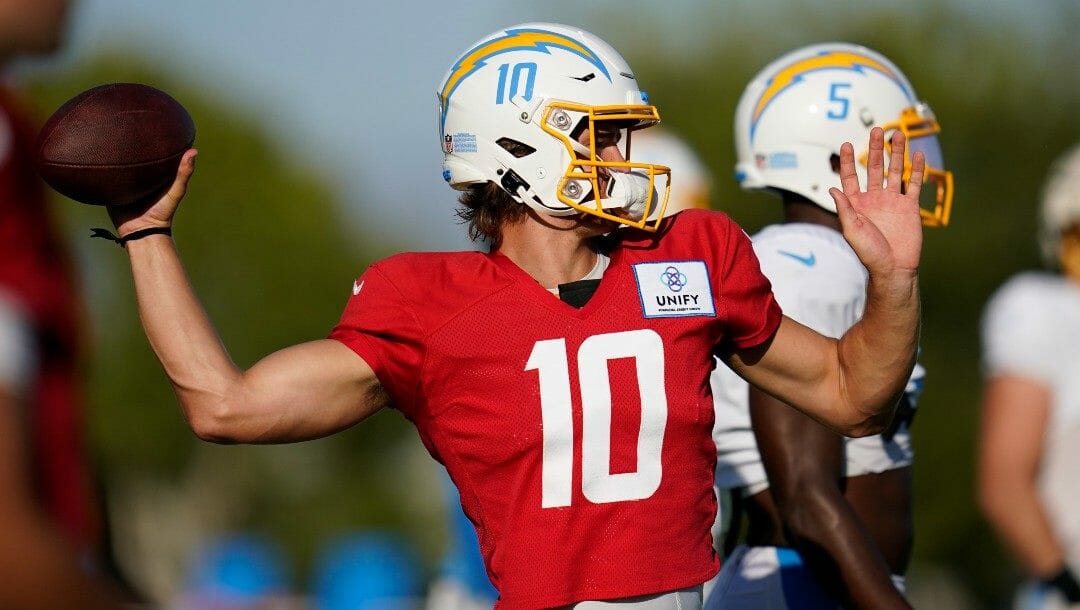 The Chargers didn’t make the playoffs last year, yet they have the sixth-best NFL odds to win the Super Bowl at +1400. That’s in part because their roster has a remarkable amount of skill on both sides of the ball.

Here’s a position-by-position look at the Chargers, who have a legitimate shot at a title in 2022.

Herbert is unquestionably a rising star in the NFL.

In his second year in the NFL, he was fifth in DYAR and sixth in DVOA. He was also graded by PFF tied for sixth with throws of 20 yards or more.

Herbert continuously hits receivers deep downfield with pinpoint accuracy and is on track to do so again in 2022.

2021 #Chargers stats: The Chargers' pass and total offensive DVOA were both fourth. Yet they were outside of the top 18 in pass, rush and total defensive DVOA @fboutsiders

The Chargers’ running back group featuring Austin Ekeler is ranked No. 4 for the upcoming 2022 NFL season, with an overall grade of 94/100.

Ekeler is arguably the best dual-threat running back in the league.

The Chargers’ wide receiver and tight end group featuring Keenan Allen and Mike Williams is ranked No. 9 for the upcoming 2022 NFL season, with an overall grade of 87/100.

Allen and Williams were in the top 15 for receiving yards a year ago. Allen was 13th in NFL with 1,138 yards and seventh with 106 catches while recording six touchdowns.

Williams stepped up in many ways and was 12th in the league with 1,146 yards, adding 76 receptions and nine scores. The Chargers also have Jalen Guyton and Joshua Palmer at receiver and Gerald Everett at tight end.

The Chargers were fifth in adjusted sack rate and 10th in adjusted line yards in 2021. They tied for the sixth-fewest sacks allowed (31).

Corey Linsley and Rashawn Slater are two anchors for the unit. Linsley was graded second by PFF among centers. Slater, as a rookie, was graded eighth by PFF. The Chargers also added Zion Johnson in the first round of this year’s draft.

The Chargers’ PFF grade for pass rushing was 13th and their run defense grade was 19th. They were 17th in adjusted sack rate and 28th in adjusted line yards.

They supplemented their front seven with some star power by trading for former Defensive Player of the Year Khalil Mack and signing Kyle Van Noy, who was 17th in PFF’s grades of linebackers last season. Joey Bosa, who’s made the last three Pro Bowls after a 10.5-sack 2021 season, is back.

After ending up 19th in pass DVOA in 2021, the Chargers addressed this weakness by adding J.C. Jackson, a Pro Bowl cornerback last season who was eighth in PFF’s grades.

Derwin James, who just received a sizable contract extension, was 10th in PFF’s grades of safeties after making the Pro Bowl two of the last three seasons. The Chargers also hope 2021 second-round pick Asante Samuel Jr. can continue to ascend.