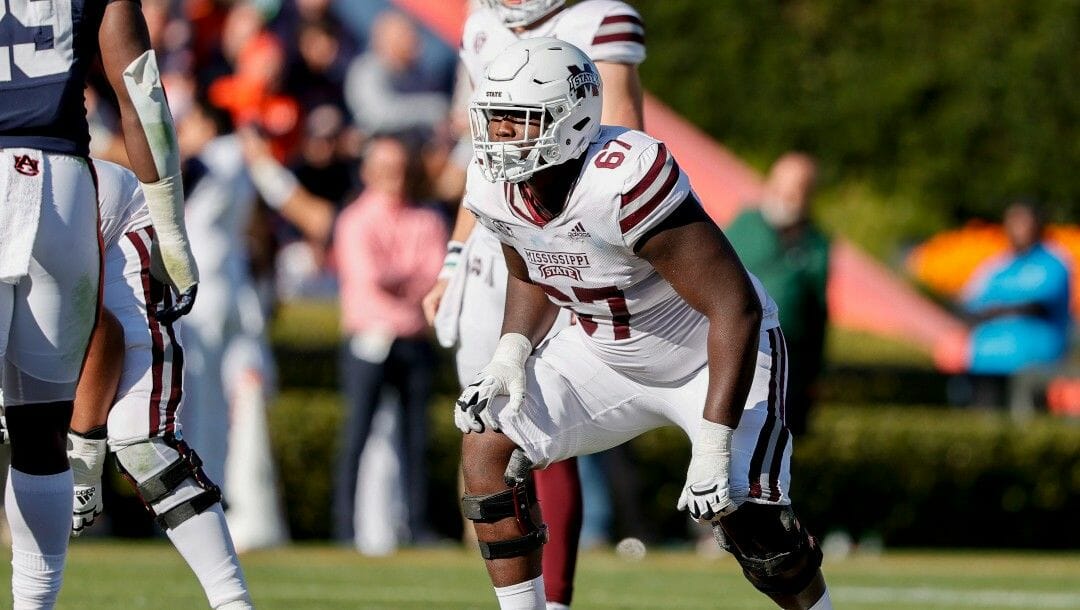 No matter the ground he gave up, advancing past Charles Cross wasn’t going to happen.

With LSU defensive end Andre Anthony darting at the quarterback on third-and-2, Cross took a few steps backward. The Mississippi State offensive tackle, who’s in contention to be selected in the top 10 of the NFL Draft, was prepared.

Anthony tried using a spin move, but Cross stayed in front. Anthony was off balance at this point, and Cross pushed him to the ground.

No matter his weaknesses or mistakes, Cross dependably remains between his signal-caller and those who threaten to sack him.

Cross is tied for the sixth-best NFL Draft odds to be selected first overall at +4000. Michigan defensive end Aidan Hutchinson has the leading NFL Draft betting odds to be picked No. 1 at -350 as of March 10.

The Jacksonville Jaguars have the No. 1 pick. They could use help at essentially every position except quarterback after selecting Trevor Lawrence in last year’s draft.

The Carolina Panthers are an intriguing landing spot with the No. 6 overall pick. While he has a chance to be selected No. 1 overall, his deficiencies may lead him to drop slightly.

The strength of offensive tackle in this year’s class also makes it tough for teams to take him before Neal, Ekwonu, or perhaps even Northern Iowa’s Trevor Penning. Teams in the top half of the draft either have them as options or aren’t necessarily weak at offensive tackle to begin with.

However, the Panthers may jump at a chance to pick up Cross.

They were ranked 25th by Football Outsiders’ adjusted line yards on the ground and 27th in adjusted sack rate. Pro Football Focus ranked them 25th in run blocking and 28th in pass blocking.

Cross could provide an immediate boost in those areas, especially in pass protection. This would aid efforts to protect their quarterback, another position they may consider here. However, they may rather hope one of their favorite quarterbacks in this draft slip to the second round.

Cross played just two full seasons in his career with the Bulldogs. But he was impressive immediately.

As a redshirt freshman in 2020, he started 10 games. He was a Freshman All-SEC pick that year.

Against Alabama, the eventual national champion, his PFF grade was tied for seventh across the country for that week. He was the best-graded lineman on the team in five outings.

Cross was an All-American and All-SEC pick as a sophomore in 2021. He was the conference’s offensive lineman of the week twice. According to PFF, Cross was responsible for just two sacks on the year.

As shown in the last season of his collegiate career, Cross rarely gives up sacks. He was consistent in protection.

Flat out, he stays in front of defenders.

Even when his weight is on his heels, he’s strong enough to remain an obstacle to defensive linemen. In the run game, he successfully drives at the point of attack.

Thoughts on Cross’ athleticism vary, but his lateral speed is unquestionable. He’s also fast enough to run out to the perimeter and lay mean blocks on linebackers and defensive backs.

At Memphis this past year, linebacker Jalil Clemons cut inside while trying to rush the passer, then tried to spin outside. But Cross was in the way all along.

Clemons was off-balance as he was shifting directions so often. But Cross, steady and stabilized, gave his QB enough time to throw.

Cross, at times, showed wonky footwork. He sometimes hopped backward to gain leverage, yet started plays in a narrow and upright stance. This makes him susceptible to bull rushes.

He also didn’t always have the best punch on either runs or passes. Too often he gives up windows to his chest, which NFL defenders would capitalize on. But when they were engaged, Cross rarely lost.

Against LSU this past season, he initially gave up leverage to defensive end BJ Ojulari, who had the first punch. But using that lateral quickness, Cross stayed in front. And again, he made sure his quarterback had the time to throw.

Cross’ flaws can be fixed with the right coaching staff. The Panthers may believe he has enough upside to be taken at No. 6 overall.