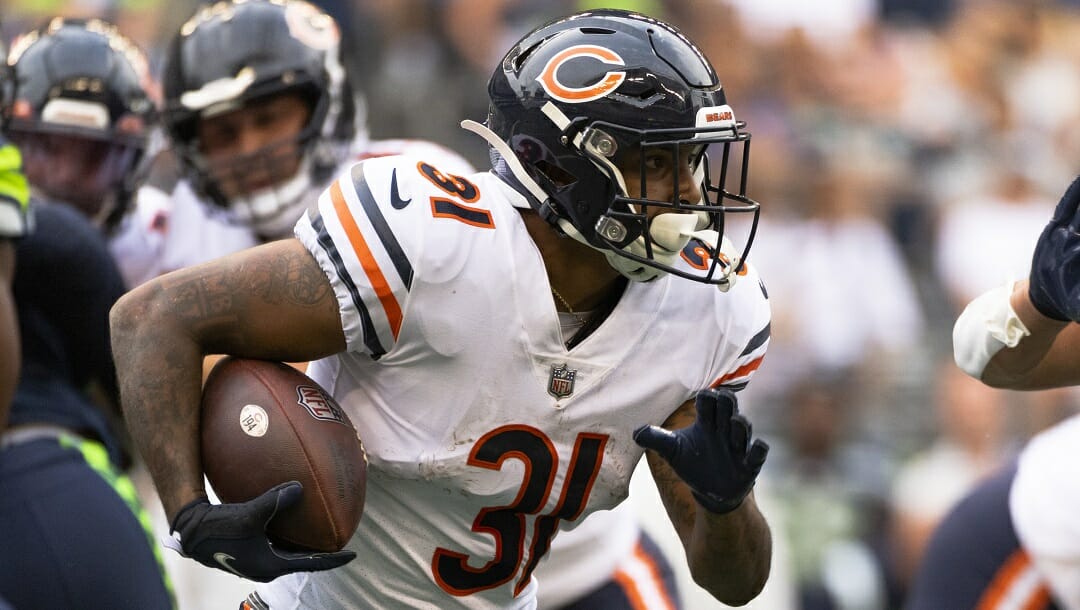 As with any team that drafts a quarterback in the first round, the expectation is that they eventually help turn the team around.

That’s the burden the Chicago Bears placed on Justin Fields when they selected him 11th overall in 2021. The NFL odds aren’t optimistic.

Now, with a year of experience under his belt, the onus is on Fields to take the next step in his development. The problem is, the Bears haven’t surrounded him with any talented players, setting Fields and the Bears up for disappointment in 2022.

A knee injury to starting quarterback Andy Dalton meant Fields was thrown into the fire sooner than anticipated last year.

Although the team prioritized upgrading the offensive line, they failed to add skilled players to their roster to complement their supposed franchise quarterback.

Darnell Mooney will get the lion’s share of targets from Fields and should build off his impressive 1,055 receiving yard season from last year.

Things look pretty bleak beyond that. The Bears brought in Equanimeous St. Brown as the number two receiving option, with N’Keal Harry as an alternative. St. Brown never got any traction playing with one of the best quarterbacks of all time in Green Bay, and it’s unlikely he thrives with the second-year pivot in Chicago.

Across three seasons playing with Aaron Rodgers, St. Brown had a catch rate of 56.1% for just 543 yards. Harry has looked no better, catching 55.3% of targets for 598 yards over the same three-year span.

Cole Kmet and David Montgomery offer a glimmer of hope, but both have hovered around average early in their respective careers.

In 17 starts last year, Kmet hauled in a respectable 612 yards; however, he doesn’t possess game-breaking ability on offense. That’s akin to Montgomery’s production at running back, with the Iowa State product averaging just 3.9 yards per carry throughout his three-year career.

No disrespect to their personnel, but the Bears’ ceiling is limited by their lack of talent on offense.

Case closed: Robert Quinn is getting the aux 🎶 pic.twitter.com/zZxTbuTsU2

The Bears may have lost a few defensive players this past offseason, but they remain an imposing force.

Robert Quinn will anchor the front seven line while two second-round picks to upgrade the secondary. Jaquan Brisker and Kyler Gordon are projected starters and expected to step in and make an immediate impact.

The defense will once again be the foundation of the Bears’ success, and they will keep the team in games longer than they deserve.

It’s appropriate that the Bears are situated in the mid-west because everything about this team is mid.

The Bears lack the firepower to compete with the top teams in their division or make a legitimate run to the postseason, and that’s reflected in their Super Bowl odds at BetMGM.

Chicago enters the upcoming campaign as +10000 longshots, implying that the Bears have about a 1% chance of winning the championship. Considering their limited offensive effectiveness, that’s probably overestimating their chances.