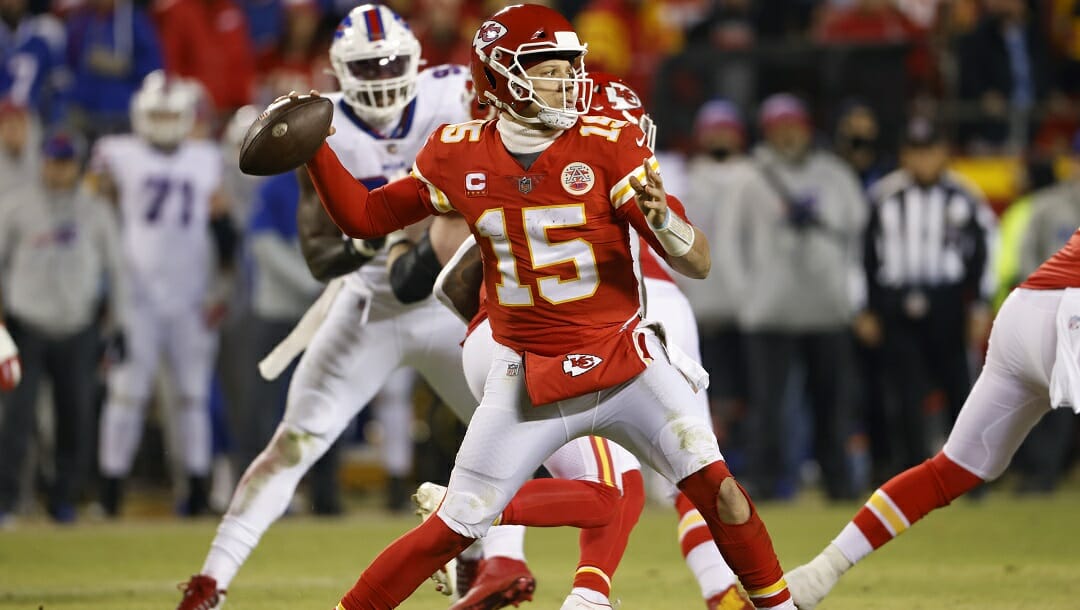 This offseason, the Chiefs lost one of the best wide receivers in the league in Tyreek Hill. But still, with Patrick Mahomes at quarterback, the Chiefs have the third-best NFL betting odds to win the Super Bowl at +1000.

Here’s a position-by-position look at the Chiefs, who should still have one of the best offenses in the NFL.

Last year was not Mahomes’ most consistent. But his abilities are undoubtedly among the best in the league.

Last season, he was PFF’s 13th-rated passer. But he was still fourth in the NFL in DYAR and DVOA.

Much like the No. 1 quarterback on this list, Mahomes will have to find a way to keep thriving without his primary target, Tyreek Hill, now gone. But with Andy Reid still at head coach and other weapons added, Mahomes will have a chance to prove he’s still an elite QB without Hill.

The Chiefs’ running back group featuring Clyde Edwards-Helaire is ranked No. 29 for the upcoming 2022 NFL season, with an overall grade of 50/100.

Four Chiefs rushed for at least 250 yards last year, yet none over 600, and their rushing attempts might be dispersed as evenly in 2022. Edwards-Helaire, who was 25th in DVOA and 30th in DYAR, is the Chiefs’ leading returning rusher with 517 yards last year. But the Chiefs brought in Ronald Jones from Tampa Bay, drafted Isiah Pacheco and brought back Jerick McKinnon for a more complete position group.

The Chiefs’ wide receiver and tight end group featuring Travis Kelce, JuJu Smith-Schuster and Marquez Valdes-Scantling is ranked No. 11 for the upcoming 2022 NFL season, with an overall grade of 82/100.

The Chiefs took a major step back in this area when they traded away Hill. But they did make some important additions.

Kelce will undoubtedly remain a top option for quarterback Patrick Mahomes. Though he’ll be 33 years old, he was still second in DYAR and fourth in DVOA last season.

Smith-Schuster, a former Steeler, and Valdes-Scantling, a former Packer, will be greatly depended on. The Chiefs also drafted Western Michigan star Skyy Moore in the second round and expect Mecole Hardman to make the most of more opportunities with Hill gone.

The Chiefs were top 10 by several measurements. That includes PFF’s grades for run blocking (tied for second) and pass blocking (sixth), as well as adjusted sack rate (fourth) and adjusted line yards (eighth).

Center Creed Humphrey (first), guard Joe Thuney (eighth) and tackle Orlando Brown Jr. (29th) were all among the top linemen in PFF’s grades at their positions.

Meanwhile, their D-line was 16th or worse in those categorieshttps://t.co/XkujCzE4Db

The Chiefs’ adjusted sack rate was 26th, and their adjusted line yards were 27th. Their run defense was graded 16th, and their pass rush was 19th by PFF.

The Chiefs helped themselves by drafting George Karlaftis in the first round. Chris Jones was fifth in PFF’s defensive interior lineman grades, and Nick Bolton was 14th among linebackers.

The Chiefs were 23rd in pass DVOA but eighth in PFF’s coverage grades. While losing Tyrann Mathieu, they traded up for Trent McDuffie in the first round of this year’s draft.

Rashad Fenton was seventh among PFF’s grades for cornerbacks, and Juan Thornhill was 30th for safeties.