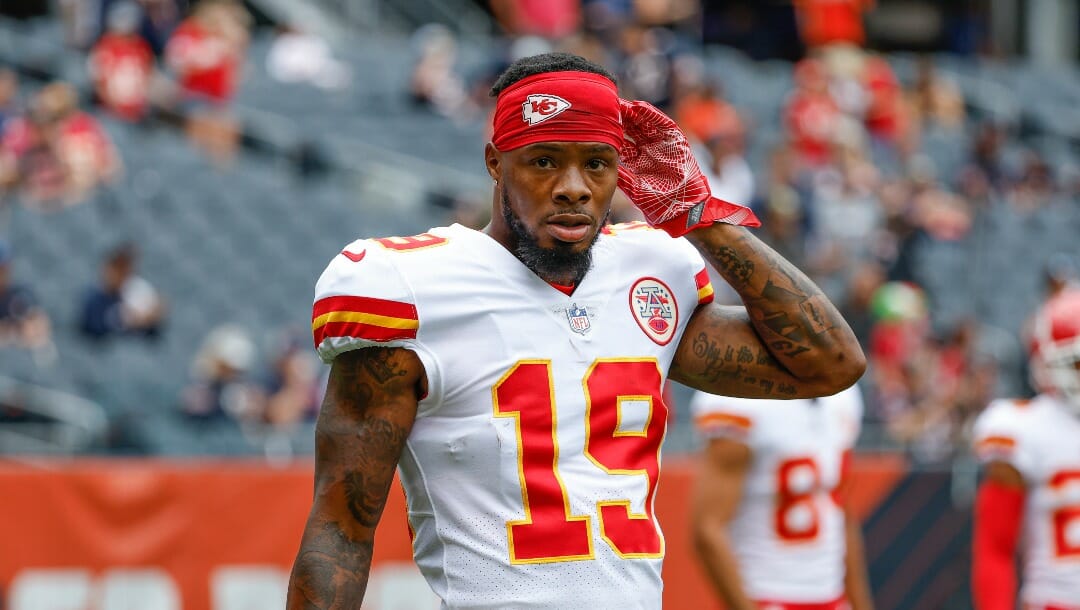 In four seasons as a starter, Patrick Mahomes has finished with no fewer than 11 wins or seven games above .500. Mahomes is well on his way to cementing himself as one of the all-time greats. Still, if he wants to help the Kansas City Chiefs earn the “dynasty” moniker, they need to win more championships.

The six-time defending AFC West champs are again front and center in the Super Bowl conversation, sitting with the third-best NFL odds to win the Super Bowl at +1000. Can Mahomes and the Chiefs make three Super Bowl appearances over the past four seasons?

For the first time in Mahomes’ career, he enters the season without the safety blanket of Tyreek Hill on offense. Kansas City dealt the six-time Pro Bowler to the Miami Dolphins in exchange for a haul of draft picks to help extend the team’s championship window. Although it’s seemingly impossible to replace Hill’s production, the Chiefs surrounded Mahomes with wideouts for the upcoming campaign.

JuJu Smith-Schuster is coming off a down year in which he recorded just 129 yards in five games but has been brilliant at times throughout his career, signing with the Chiefs on a one-year show-me deal.

The former Pro Bowler averaged 12.8 yards per catch or more through his first three seasons in the league while being limited to 960 yards in 19 games over his last two seasons. Smith-Schuster gets an upgraded quarterback and heads into the season with sky-high expectations.

He’s flanked by Marquez Valdes-Scantling, who signed a three-year pact with the Chiefs. Valdes-Scantling comes from a similar place as Smith-Schuster; injuries limited the fifth-year pro to just 11 games, seven starts, and 430 yards last season. Nevertheless, Valdes-Scantling has sometimes flashed game-breaking talent and should thrive as a complementary piece to a dynamic offense.

History will look back fondly at Travis Kelce, one of the most dominant tight ends of all time. The three-time All-Pro has six straight 1,000-yard seasons, totaling 47 touchdowns across that stretch. Although he’ll turn 33 this season, Kelce is showing no signs of slowing down and will feature prominently in the Chiefs offense again.

Kelce isn’t the only familiar face coming back in 2022, as Mecole Hardman and Clyde Edwards-Helaire are back and ready to assume more significant roles with the team. Hardman emerged as a legitimate receiving threat last year, ranking third on the team in targets, receptions, and yards, behind Kelce and Hill. Hardman will see his fair share of targets in a more balanced offense and could set the bar even higher this year.

When the Chiefs drafted Edwards-Helaire at the end of the first round in 2020, they were expecting him to be a franchise running back. Although injuries have limited his effectiveness through the first two seasons of his career, Edwards-Helaire has lived up to his potential when healthy. There are no guarantees in the NFL, but if the LSU product sustains his production throughout the season, we could see the Chiefs reach new heights.

With the price being what it is, bettors aren’t flocking towards the Chiefs in the futures market, but there have been some sharp money showing up on the AFC West contenders.

Although Mahomes may be missing his preferred receiver from the last few seasons, he has more weapons to rely on this year. That gives the Chiefs a leg up on their competition as they look to make their triumphant return to the Super Bowl and emerge as the latest dynasty.