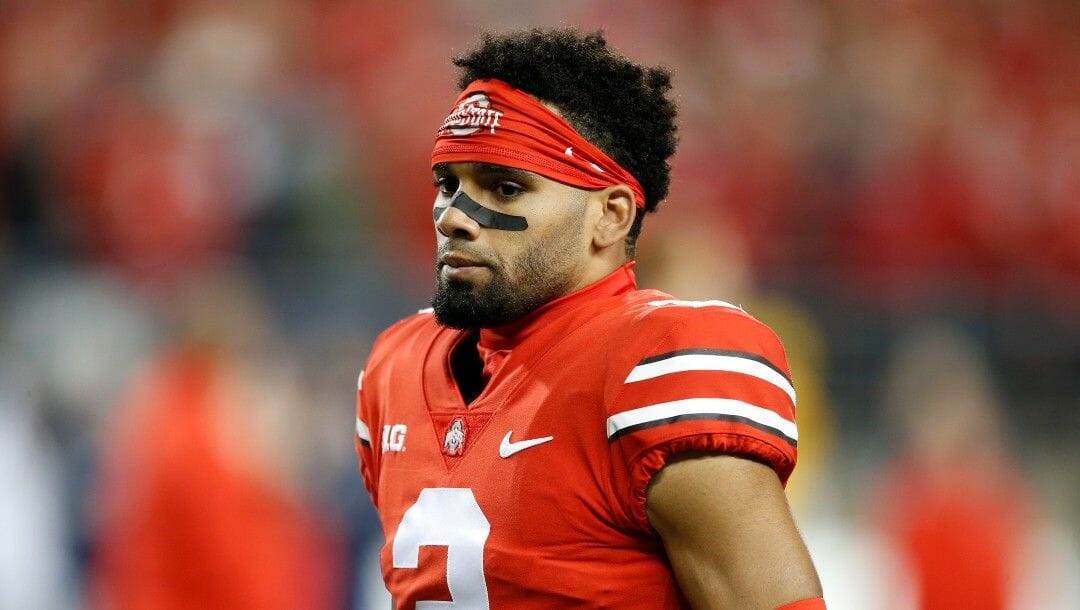 His team facing a deficit and needing a spark, Chris Olave delivered.

Ohio State had the ball at its own 39-yard line and was down by a touchdown at Minnesota with under five minutes to play. Olave, who’s among the top wide receivers in this year’s NFL Draft, was dependable in a crucial situation.

Quarterback CJ Stroud faked a handoff, rolled right and located Olave on the right sideline. The wideout caught the ball on the opposite 40 and carefully kept his feet in bounds. He waited for a block.

Then he outraced everyone else with ease. He scored, turning the tide of the contest.

A route-running tactician, Olave can instantly change the complexion of games.

Olave has NFL Draft odds to be selected first overall of +50000 as of March 29. He has the fifth-best odds to be the first wide receiver taken at +2000.

The Washington Commanders need help at wide receiver, and Olave would mesh well with their offense.

Washington ranked 24th for pass routes last year, according to Pro Football Focus. After the Commanders traded for Carson Wentz, they’ll want to give him as much help as possible.

They already have a No. 1 receiver, so secondaries won’t focus all of their attention on Olave. Terry McLaurin, another former Ohio State wideout, led Washington with 1,053 yards on 77 receptions a year ago. He was 32nd in the league by DYAR, according to Football Outsiders.

But Washington’s next leading receiver was running back JD McKissic at 397 yards. With a fairly strong offensive line, running back Antonio Gibson looking to add another 1,000-yard season to his resume, and Wentz added to the mix, Olave would help round out the Commanders offense.

Among all of the stars who have played wide receiver at Ohio State, Olave is the leader among them in finding the end zone.

He ended his collegiate career with 35 touchdown catches, a program record, as well as 2,711 yards and 176 receptions. This was with three different opening-day starting quarterbacks, so he can adjust to different passers with varied skill sets.

Olave was an All-American and a Biletnikoff Award semifinalist his final season. He totaled 65 catches for 936 yards and 13 touchdowns, which tied him for sixth in the country.

In seven games the year prior, he totaled 729 yards and 7 touchdowns on 50 receptions. As a sophomore, he racked up 849 yards and 12 touchdowns with 49 catches.

Olave is fluid and balanced in his routes, yet crisp with his breaks. He knows exactly how to manipulate defensive backs.

He was eighth at the NFL Combine, one spot behind teammate Garrett Wilson, with a 4.39-second 40-yard dash. He uses this trait to his advantage on the field when he changes speeds to fool defenders.

Olave can identify weaknesses in zone defenses and exploit them as well. He also played on the punt return team, so he’s willing to hustle on special teams.

At first glance, it may seem to be a result of bad defense or an excellent scheme. But Olave’s technique usually had plenty to do with that.

Last year against Nebraska, Olave was split out left on first-and-goal.

Stroud rolled that way after the shotgun snap. The play was clearly dependent on Olave being open in one-on-one coverage.

Olave shuffled his feet. Cornerback Cam Taylor-Britt was on his heels. Olave ran slightly toward the outside with his body still facing the middle of the field, illustrating his coordination.

Olave whipped around and headed for the sideline. Taylor-Britt had no chance. Stroud threw his way for a score.

Watch this pass and catch from CJ Stroud to Chris Olave💪💨👏@nflnetwork @OhioStateFB pic.twitter.com/7xWo1t0PoL

Olave needs to add strength, which was evident in some ways. He wasn’t effective as a run blocker, for example.

At 6-foot, 187 pounds, with a vertical jump of 32 inches, Olave is capable of corralling passes in a crowd, though. He successfully works back toward underthrown passes and battles for them.

In a matchup with Michigan State, Stroud was about to be hit and decided to target Olave in a hurry.

The receiver had won his matchup with the cornerback, but he looked like was about to fall over as he adjusted to the ball along the left sideline.

Instead, Olave hauled it in with his feet in bounds. Even when passes are off the mark, he’s talented enough to get open and finish plays with impressive catches. This would be crucial in Washington.