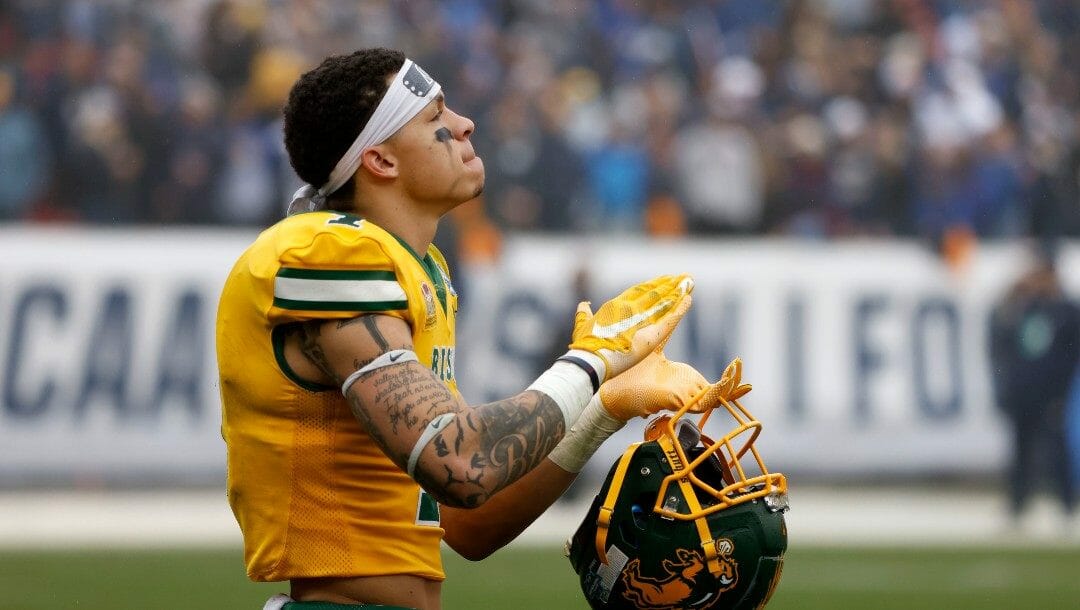 Despite how far downfield the first-down marker was, Christian Watson was going to ensure his team kept its drive marching.

The North Dakota State wide receiver, who could be worthy of a first-round pick in this month’s NFL Draft, was split out wide to the right. The Bison faced a second-and-26 at home against Missouri State.

The ball was underthrown, so Watson had to deal with two defenders in his proximity as he competed for the catch along the sideline. Cornerback Montrae Braswell leaped with Watson in hopes of swatting the lob away.

But Watson high-pointed it exactly right. Even with a defender’s hand on the pass, Watson hauled it in. And with his momentum going forward, he landed both feet in bounds and beyond the line to gain.

Watson is equipped with unique talents which could be utilized well at a professional level.

Watson has the seventh-best NFL Draft odds to be the first wide receiver selected at +5000.

Michigan defensive end Aidan Hutchinson has the leading NFL Draft betting odds to be picked first at -250 as of April 6.

The Green Bay Packers have been vocal about their need for speed at the wide receiver position, and Watson would bring exactly that at No. 28 overall.

So two of their top three receivers from 2021 are gone. They accounted for 37% of Green Bay’s receptions, 39% of their targets and 44% of their receiving yards.

Last season, the Packers were second by Football Outsiders’ DVOA metric on offense. If they want to maintain their place as one of the best teams on that side of the ball, they need to add talent out wide. With two picks in the second half of the first round, they could use one on a talent like Watson.

While in the FCS, Watson was among the most skilled players at that level.

He was a two-time HERO Sports first-team All-American and was named to All-Missouri Valley lists five times for his role as a receiver and returner. He ended his Bison career eighth all-time with 2,140 receiving yards, ninth with 686 kickoff return yards and 10th with 105 catches.

Watson was NDSU’s leading receiver by the time he was a sophomore, one of three seasons he paced his team. With now 49ers quarterback Trey Lance throwing his way, he totaled 732 yards and six touchdowns on 34 receptions.

A junior in 2020-21, he was once again on the All-Missouri Valley lists as a wideout and return specialist. He accounted for 19 receptions, one touchdown and 442 yards, going toward 896 all-purpose yards.

He was all-conference as both a receiver and an all-purpose player his senior season in 2021. He racked up 801 yards and seven touchdowns on 43 catches. He tacked on 114 yards and a score on 15 rushes to go toward his 1,142 all-purpose yards.

Watson consistently relied on his elite speed, and it often was enough to result in explosive plays.

He averaged 20.4 yards per reception collegiately. Of his 180 rushes, catches or returns, 57 went for 20 yards or more.

Watson was tops among wide receivers at the NFL Combine with a broad jump of 11 feet, 4 inches. He clocked in at 4.36 seconds in the 40-yard dash and recorded a 38.5-inch vertical jump, both sixth at his position.

According to Next Gen Stats, he earned a maximum athletic grade, putting him among the top receivers to ever participate in the combine.

Athleticism scores for the wide receiver class are official.

So even in the NFL, Watson should be capable of outracing defensive backs down field as he did in college. At 6-foot-4, 208 pounds with 32.5-inch arms, Watson also has the size and length to make contested grabs.

In last season’s FCS national championship, the Bison faced a third-and-10 in the fourth quarter. Montana State sent a blitz, so Miller threw Watson’s way in a hurry.

Watson ran a 10-yard hitch. And with leverage to the outside, he had enough separation from cornerback Simeon Woodard to catch the pass along the boundary for a first down.

And it's only the beginning. pic.twitter.com/ubhq2Gnvox

The routes Watson ran were fairly limited. He often was either deep downfield, sometimes over the middle, or he ran hitches.

His footwork out of his breaks wasn’t always crisp, and he dropped passes at an unusually high rate. He also relied on his speed alone quite commonly, so it’s somewhat difficult to predict how his skills may translate to more complicated pro schemes.

But during the Senior Bowl, he showed he can still win against some of the best corners on those types of routes. He also showcased physicality as a run blocker, a trait which will also help him against press coverage.

Watson is also versatile. He can line up outside or in the slot, like Adams did for Green Bay, or in the backfield.

He can also help out as a runner on sweeps. Aside from his quickness, he understands pursuit angles and is clever in the way he avoids defenders in the open field.

In a tilt with South Dakota, NDSU called for an end-around to Watson. He began the play out left and followed a blockade of teammates after taking the ball.

Watson cut inside to give an offensive lineman the angle needed to take out one defender. Then he went outside and outran another.

A defender dove for his feet near the sideline, but Watson jumped and remained in bounds. He finished the play off by cutting back toward the middle as blockers before him paved a lane to the end zone.

Watson is a versatile receiver who could assist an NFL team in myriad ways.