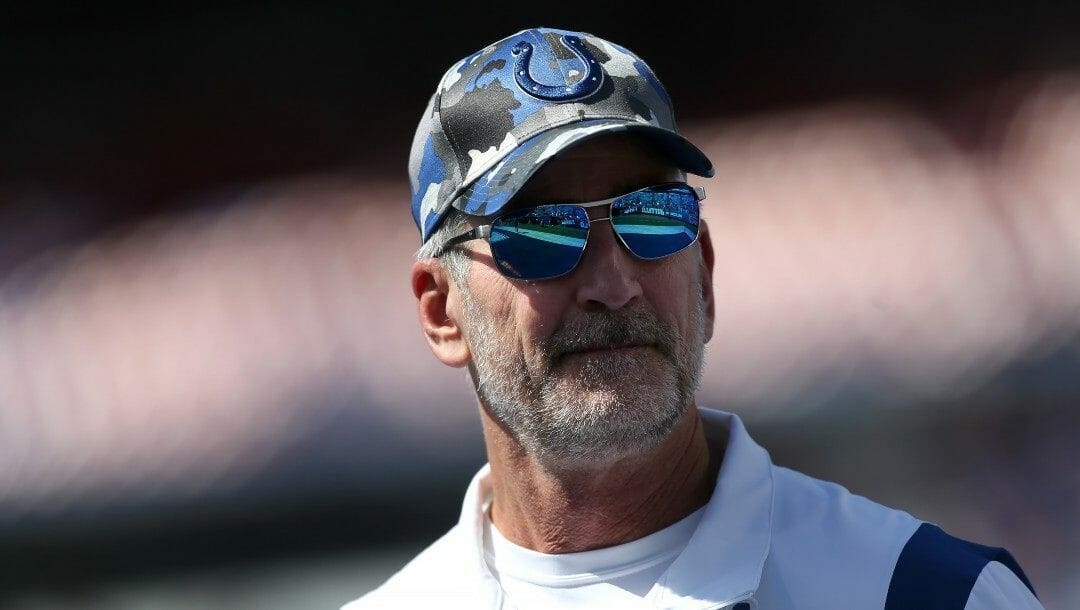 Being a head coach in the National Football League is one of the most challenging jobs in sports. The job itself comes with the weight of each season landing on their shoulders. Every decision, every game plan, all comes back right to the man wearing the headset. The job requires discipline and patience. With a scarce number of positions, only 32 individuals can be head coaches in the NFL at a time.

The Indianapolis Colts, who have NFL odds of +2500 to win the Super Bowl in 2022, have been searching for a long-term successor to former head coach Tony Dungy. Dungy is the most recent head coach to find success in Indy.

Winning a Super Bowl with Indianapolis in 2006 capped off Dungy’s coaching career and solidified him as one of the top coaches in Colts’ history. Since then, the Colts have made only one Super Bowl appearance, in 2009, with Jim Caldwell as head coach. However, the search continued following Caldwell’s firing in 2011. Two of the head coaches Reich worked under in his coaching career.

The hiring of Frank Reich in 2018 as the head coach of the Colts seems to be just what owner Jim Irsay was looking for to lead his team. Despite the adversity Reich has faced, he has managed to post three winning seasons above .500 in his first four seasons as head coach.

Always love to see this guy back in Buffalo. Frank Reich . pic.twitter.com/tqfRDHosBq

Following the unexpected retirement of Pro Bowl quarterback Andrew Luck before the 2019 season, Reich has generally turned nothing into something. He’s had four different starting quarterbacks in his first four seasons, and it’s been amazing to see what Reich’s leadership has accomplished.

Reich has been described as a player’s coach, and it comes as no surprise. He has managed to get the best out of each player he’s coached, especially on the offensive side of the ball.

The offense is Reich’s bread and butter, so it makes sense why he can find each offensive player’s best strengths. Luckily, finding a player’s strengths is one of the most critical objectives for a head coach.

Reich began his coaching journey in 2006 as a coaching intern for none other than the Colts. He worked his way up as an offensive assistant in 2008 before leaving to work as wide receivers coach for the Arizona Cardinals in 2012. The former quarterback would then make another stop in San Diego as he became the quarterback coach for the Chargers in 2013.

A year later, Reich earned his badge of approval, and the Chargers promoted him to be their offensive coordinator in 2014. Following two seasons as the coordinator for San Diego, Reich decided to make a change in 2016 to become the Philadelphia Eagles’ offensive coordinator. The season before being offered the head coaching position in Indianapolis, the Eagles and Reich won the Super Bowl in 2018.

In 2021, the Colts finished with a 9-8 record and missed the playoffs. In an up and down year, Indy ultimately found themselves in the middle of the pack. Their offense found themselves ranked 16th in the league.

Despite the defense’s 33 forced turnovers, second in the league, they finished the season ranked 16th as well. The Colts will look to forget their end-of-season collapse in Jacksonville and put it all behind them.

With many changes to the Colts’ coaching staff and roster, Reich and his team look to bounce back during this upcoming season. Adding former MVP Matt Ryan, will give the head coach the reliability he was looking for at the quarterback position and allow Reich to open the offense up.

Reich also hired Gus Bradley as the team’s defensive coordinator to replace Matt Eberflus, who took a job as the head coach of the Chicago Bears. A new scheme and added talent should give the Colts a new sense of freshness.

Despite an easier division in the AFC South, winning the division will undoubtedly be no cakewalk. Between the two rebuilding teams, the Jaguars and the Texans, both will be eager to prove their lack of experience doesn’t matter.

Don’t forget about the first seed in the AFC last year, the Tennessee Titans. The Titans underwent an offseason makeover following the trade of star-wideout AJ Brown. Nonetheless, Tennessee will be a tough challenge for Indy.

The Colts’ win total has been placed at 10 with an Over of -105 and an Under of -115. Reich and the Colts will have their eyes set on more than just a divisional championship this year, and winning more than ten games would certainly be a starting point.

Although Reich’s record as head coach may not be as appealing as others, his understanding of the game, compassion for the sport, and unique ability to relate to all players are hard to come by. The offensive mastermind will have a chance to build upon his record this upcoming season.