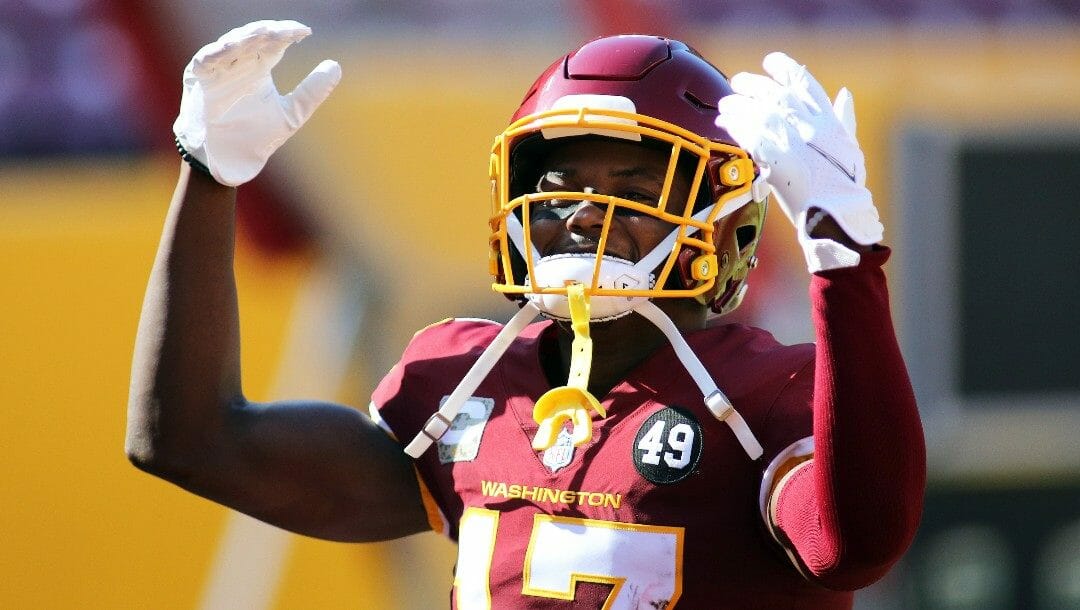 When the Commanders traded for Carson Wentz, it seemed they believed he could help them reach the postseason. But it may not have been enough.

Here’s a position-by-position look at the Commanders, whose NFL odds to win the Super Bowl are +8000.

Wentz undeniably has some of the best physical traits in the NFL. But his decision-making is suspect at best.

Perhaps his third team in as many years will be the right fit. Still, he makes choices that often set his team back to rank him higher.

The Commanders’ running back group featuring Antonio Gibson is ranked No. 18 for the upcoming 2022 NFL season, with an overall grade of 69/100.

Gibson suffered from being on an offense that was 21st in total DVOA last season. And while he wasn’t as effective as he could be, he was still sixth during the regular season with 1,035 yards.

Gibson and backup JD McKissic are also competent pass catchers. Brian Robinson Jr. was showing promise as a rookie until he was non-fatally shot and will miss at least the first four weeks of the season.

ANTONIO GIBSON TO THE HOUSE

The Commanders’ wide receiver and tight end group featuring Terry McLaurin, Jahan Dotson and Logan Thomas is ranked No. 20 for the upcoming 2022 NFL season, with an overall grade of 71/100.

McLaurin is the lone proven option on this team out wide. Ranked 32nd in DYAR and 51st in DVOA, he caught 77 passes for 1,053 yards and five touchdowns in 2021.

The Commanders also added Dotson, a former Penn State standout, with the 16th overall pick and have Curtis Samuel as another option. Thomas was ninth in DVOA and 18th in DYAR among tight ends while playing just six games, but is expected to be Washington’s starter.

While Washington wasn’t high by some metrics, like 19th in adjusted line yards and 24th in adjusted sack rate, the team was graded fourth in pass blocking and sixth in run blocking by PFF.

Washington was fifth in PFF’s grades for run defense and 11th in pass rushing. The team was 11th in adjusted sack rate and 12th in adjusted line yards.

Jonathan Allen was tied for third among interior defensive linemen in PFF’s grades. Edge rushers Montez Sweat and Chase Young were top 25. After playing just nine games last season, Young hopes to bounce back after a Defensive Rookie of the Year campaign in 2020.

Kendall Fuller was third in PFF’s grades of cornerbacks last season. But the team’s secondary takes a drop-off from there.