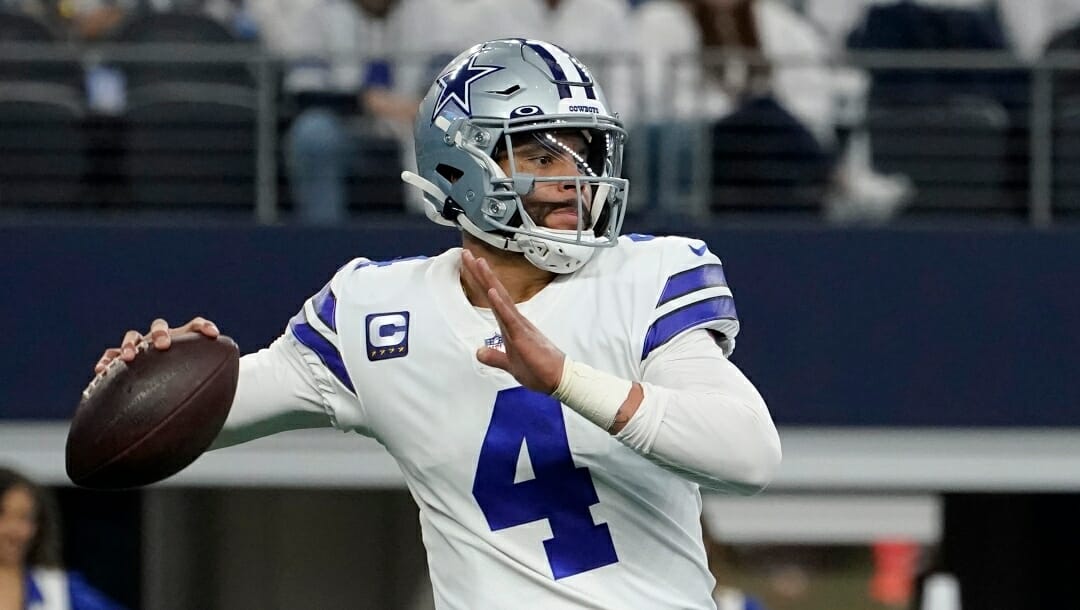 After winning the NFC East title a year ago, the Cowboys saw their season end in the Wild Card round of the playoffs. But they have the potential to get even further in the postseason this year.

Here’s a position-by-position look at the Cowboys, whose NFL odds to win the Super Bowl are +2000.

The numbers indicate Prescott was among the best quarterbacks in the league last year.

He was third in DYAR and DVOA. He was also graded eighth by PFF among those at his position.

The Cowboys will have to learn to live without Amari Cooper, who was traded to the Browns this offseason. However, Prescott should be capable of carrying the offense nonetheless.

The Cowboys’ running back group featuring Ezekiel Elliott and Tony Pollard is ranked No. 13 for the upcoming 2022 NFL season, with an overall grade of 77/100.

The Cowboys would likely be higher on this list if it weren’t for the usage of their backs. In 2021, Pollard was fourth in DVOA and ninth in DYAR, while Elliott was 23rd and 11th. However, Pollard (134) was given half as many carries as Elliott (249).

The Cowboys, who were 13th in rushing DVOA last season, will still have an above-average rushing attack. But the distribution of carries, possibly because of Elliott’s large contract, sets them back.

The Cowboys’ wide receiver and tight end group featuring CeeDee Lamb, Michael Gallup and Dalton Schultz is ranked No. 12 for the upcoming 2022 NFL season, with an overall grade of 81/100.

Lamb, a Pro Bowler entering his third year, is among the best up-and-coming wideouts in the game. PFF graded him 10th among receivers last season.

Gallup signed a five-year, $57.5 million deal this offseason after Dallas traded Amari Cooper to Cleveland. Gallup played just nine games in 2021 due to an ACL tear and caught 35 passes for 445 yards and two touchdowns.

Schultz was fourth in DYAR and fifth in DVOA among tight ends in 2021, catching 78 passes for 808 yards and eight touchdowns.

Offensive line will be an area of strength for the Cowboys yet again. Last year, they were second in adjusted line yards and ninth in adjusted sack rate.

Some 2021 #Cowboys stats: Dak Prescott was third in the league in passer rating and fourth in completion percentage.

The Cowboys' defense was second in DVOA.

Micah Parsons was the Defensive Rookie of the Year after being drafted 12th overall. Leighton Vander Esch was 39th in PFF’s grades, while Parsons was first.

The Cowboys’ adjusted sack rate was 12th, and their adjusted line yards were one spot behind at 13th. In PFF’s grades, their run defense was 27th, but their pass rush was seventh.

The Cowboys were among the best teams in the NFL in shutting down air attacks, as they were second in pass defense DVOA. Trevon Diggs was an All-Pro last season after leading the league with 11 picks.

Jayron Kearse was 13th in PFF’s grades of safeties. Malik Hooker is another veteran safety on the team.