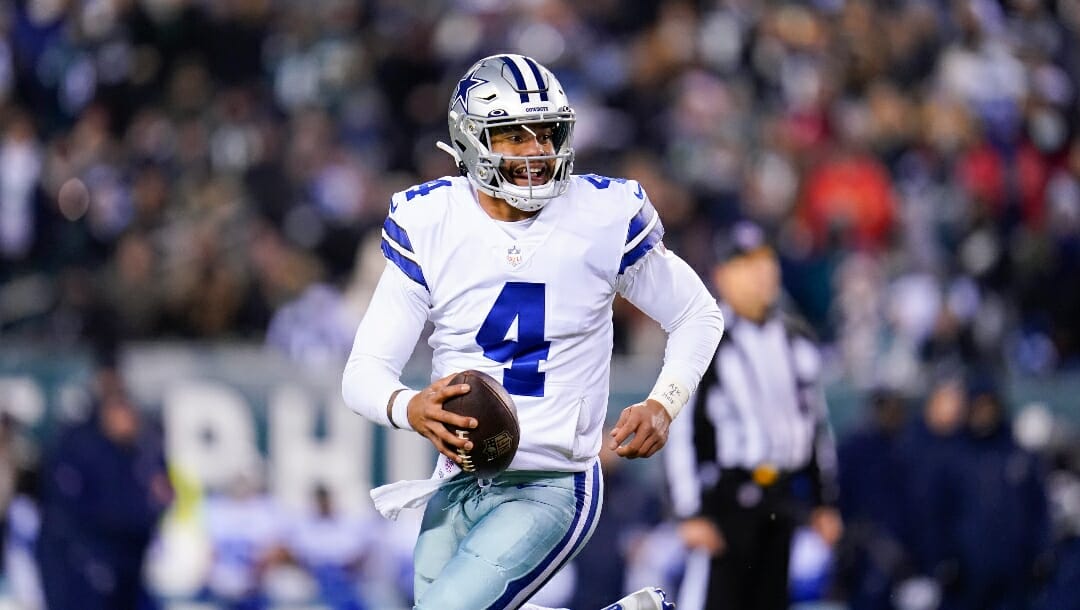 NFL training camps are officially underway, which means the pro football media cycle is about to ratchet up exponentially.

For handicappers, it’s also time to start getting serious about the futures market. The occasional NFL parlay is great for in-season betting, but it’s always wise to have some pre-flop futures positions.

One zone of action that I’m paying close attention to is the NFC East divisional market.

The Dallas Cowboys finished 12-5 last year, winning the division and earning the NFC’s No. 3 seed in the playoffs. But, they were one and done in the postseason, losing to San Francisco at home in the Wild Card round.

Thanks in part to last year’s division-winning campaign, Dallas has been priced as a modest +120 favorite to repeat as NFC East champions this year.

Naturally, that price comes via the BetMGM online sportsbook.

I have significant concerns about buying in on the Cowboys at the very top of the market.

Let’s start with the division itself. As any NFC East odds hound can tell you, there is an extremely high level of parity between the Cowboys, Eagles, Giants and Commanders.

No team in this division has won back-to-back divisional titles since nearly 20 years ago when the Eagles won four straight from 2001-04.

This is a division with a high level of parity, and the other teams got better during the offseason. For example, the Eagles – priced to win the NFC East at +190 – added AJ Brown to their growing cast of offensive playmakers.

According to PFF, they’ll also start the 2022 campaign with the best offensive line in the NFL.

Washington, too, should be more competitive this fall. Carson Wentz might not be your cup of tea, but when you consider the cast of backups and retreads that Washington has fielded at QB in the post-Kirk Cousins era, it’s hard to argue that Wentz isn’t an upgrade.

Even New York should be better, thanks to a new head coach and a decent draft.

It’s only the Cowboys who appear to have gone backward. The defense should be one of the NFL’s better units, but the offense lost key contributors in free agency, including WR Amari Cooper and OL La’el Collins.

With a public team like the Cowboys, there are also pure marketplace factors to consider. Any time the Cowboys are good, you have to pay a premium to bet on them since so many other people also want to bet on the Cowboys.

I’m recommending anyone looking to create a pre-flop NFL position leave the Dallas Cowboys odds on the table.

The depth chart isn’t as thick as I’d like it to be, partly because of how much money Jerry Jones has elected to invest in his quarterback and running back positions.

At the end of the day, I’m just not willing to buy a team like the Cowboys at the top of the market – especially given the turnover trends in this particular division.

Don’t just take my word for it, though. I invited Quinton Mayo (BetMGM Tonight) on this week’s episode of The Lion’s Edge to talk about the Dallas Cowboys odds conundrum and the larger NFC East picture.

A post shared by The Lion’s Edge Podcast (@thelionsedge)

Quinton had several insights, but the biggest may have been the value of the Commanders at 5-to-1.

Good economic fundamentals tell us that if Dallas is overpriced, at least one other team must be underpriced. Quinton and I agree that the Commanders provide great value after upgrading the most critical position on the field.

At +190, the Eagles are worth divisional consideration as well.

You can subscribe to The Lion’s Edge for intelligent, weekly insights into trends and betting tips from across the online sports betting world. It’s available on iTunes, Spotify, or wherever you listen to podcasts.