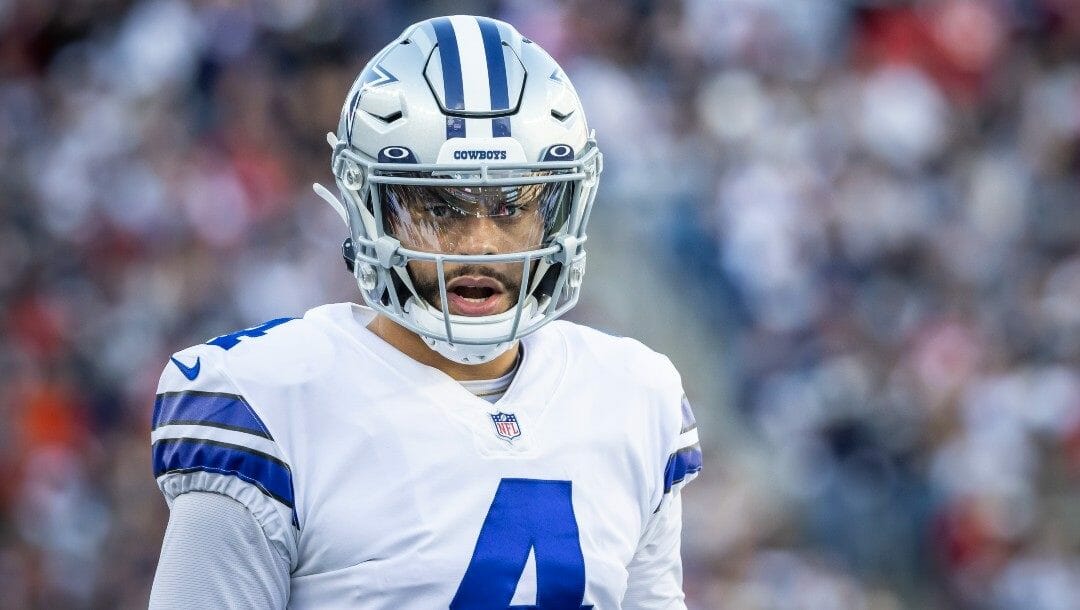 No team could hang with the Dallas Cowboys offensively last season. The NFC East champions ended the year with the most points and second-most total yards in the entire league.

However, with an offense as prolific as the Cowboys’, you would expect NFL odds better than +1800 in the Super Bowl futures market. Given the departure of several receiving options, there may be apprehension that the Cowboys will pick up where they left off.

Dak Prescott’s ability to spread the ball around the receiving corps made the Cowboys’ offense special. Five receivers finished the campaign with 445 yards or more, with seven hauling in at least 35 receptions. The loss of several vital receivers will increase CeeDee Lamb’s usage while amplifying the opposing team’s focus on the third-year pass-catcher.

Amari Cooper was dealt to the Cleveland Browns and is an impactful loss for Dallas. Last year, Cooper was tied for the second-most targets on the team, accumulating the second-most receiving yards, and finishing with the most touchdowns.

Michael Gallup will eventually absorb some of the additional targets available. Still, the 26-year-old has struggled with injuries lately and continues to work his way back from an ACL tear suffered in Week 17. Although James Washington will offset those losses, the Oklahoma State product broke his foot, leaving no clear timetable for when Gallup and Washington will suit up.

That’s not to diminish the threat of Lamb and Dalton Schultz. Still, opponents can emphasize coverage on the two standouts with fewer receiving options, forcing Prescott to turn to tertiary options.

Ezekiel Elliott burst onto the scene in 2016, rushing for a career-best 1,631 yards and finishing third in AP MVP voting. Since then, we’ve seen a steady decrease in his rushing yards per game, going from 108.7 yards per game in his rookie season to 58.9 in 2021.

Similarly, the Cowboys have decreased their reliance on their star running back, watching his touches per game bottom out at 13.9 last year, down from his career-best mark of 24.2 in 2017.

Given the receiving concerns, a vintage season from Elliott is critical to their success, but there’s no guarantee he will recapture his All-Pro form.

The Cowboys’ defense did well to keep opponents off the scoreboard, operating the eighth-best scoring unit in the NFL, but there’s a disconnect between scoring defense and yards allowed. Dallas ended the year giving up the 13th most yards on the ground and through the air, ranking 18th in the league in total defense.

The bend-but-don’t-break mentality helped them secure their first division title since 2018 but is incompatible with long-term success. There could be a more determined effort from the Cowboys this season, but failing that, we could see a surge in points against.

A general rule in NFL betting is that the public loves the Cowboys. Without confirmed action reports, any line movement on the Cowboys futures price should be taken with a grain of salt.

Dallas is tasked with getting past the Tampa Bay Buccaneers, Cincinnati Bengals, Philadelphia Eagles, and Los Angeles Rams within the season’s first six weeks. Considering their current standing in the betting market, along with the above-noted concerns, we should see the price on them dip early this year.

Now is not the time to buy on the Cowboys, but if they get healthy and find their rhythm on offense, we could see their Super Bowl odds improve later in the campaign.