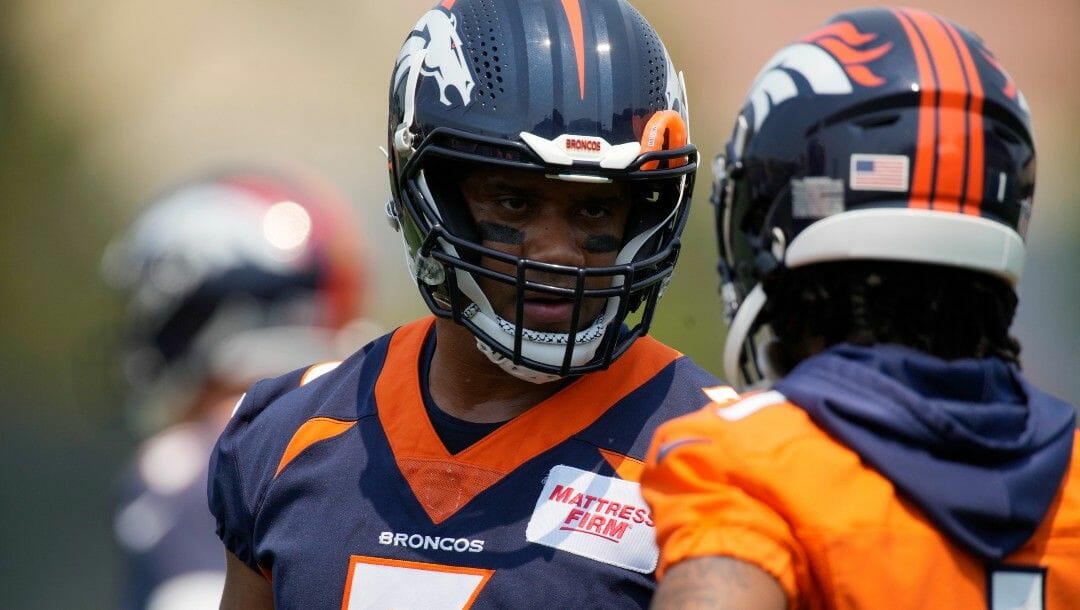 The past two Super Bowl champions share one thing in common – both made substantial upgrades at the quarterback position in their respective championship years. Of course, we’re talking about the Tampa Bay Buccaneers and Los Angeles Rams, who brought in Tom Brady and Matthew Stafford, respectively. As we look towards 2022, the Denver Broncos hope a similar destiny awaits following their acquisition of former Seattle Seahawks legend Russell Wilson.

Denver has an over/under win total of 10.5 when it comes to NFL betting.

Wilson provides stability the Broncos have not had at the position since Peyton Manning’s retirement. Wilson will have the luxury of playing alongside talented playmakers in Jerry Jeudy, Courtland Sutton, and Javonte Williams, as well as working with former Green Bay Packers offensive coordinator Nathaniel Hackett, who was hired as Denver’s new head coach. Hackett should “let Russ cook” far more than Pete Carroll ever did in what has the potential to be an explosive Broncos offense.

Wilson will be complemented by a Super Bowl caliber defense, which ranked seventh in 2021, and added talented pass rusher Randy Gregory, formerly of the Dallas Cowboys, this offseason.

With a roster built to win now, their division is the only thing standing in the Broncos’ way of a deep postseason run. The AFC West is undoubtedly the toughest in all of football, with the Kansas City Chiefs, Los Angeles Chargers, and Las Vegas Raiders all having a realistic shot of making the playoffs. Denver can ill-afford any slip-ups, particularly against lesser competition, if it hopes to be playing come January.

In what should be an exciting year in the Mile High City, let’s look at the Broncos’ 2022 regular-season schedule.

Russell Wilson makes his much-anticipated return to Seattle on Monday Night Football – the first of Denver’s five primetime games. One of the greatest players in Seahawks history, Wilson quarterbacked the team for 10 remarkable seasons, leading them to a victory in Super Bowl XLVIII. He should receive a warm welcome despite the tension surrounding his exit.

Wilson couldn’t have asked for an easier matchup in his home debut. The 33-year-old is 3-0 in his career against the rebuilding Houston Texans.

Denver’s first real test comes against a San Francisco 49ers team that made it to last season’s NFC Championship Game. This game is also a matchup between two of the league’s brightest offensive minds, San Francisco’s Kyle Shanahan and the Broncos’ Nathaniel Hackett.

The Broncos travel to Las Vegas for their first divisional clash of the season. Surprisingly, Denver has lost six straight games on the road against the Raiders.

It’s a short week for the Broncos, who welcome former Atlanta Falcons great Matt Ryan and the Indianapolis Colts to Mile High.

The quarterback matchup between Wilson and LA’s Justin Herbert is perfectly suited for primetime. Denver is 2-2 since Herbert became the Chargers starting QB in 2020.

The New York Jets should be much improved following its impressive haul of draft picks. Still, this is a must-win for Denver, given the vaunted nature of the AFC West.

The Broncos travel to London for a date with the Jags in another must-win affair. Denver is 0-2 lifetime in London. Is the third time the charm?

The Tennessee Titans present an interesting challenge in 2022. Star wideout A.J. Brown may be gone, but Denver’s defense will still have to slow down the game’s most dominant running back in Derrick Henry. The Broncos were 14th in rushing yards allowed per game last season (111.3).

The second and final meeting sees Denver welcome back its former head coach, the Raiders’ Josh McDaniels. McDaniels, who coached the team from 2009-10, compiled an 11-17 record in a disastrous tenure.

Denver’s final game before a rigorous closing stretch comes against a Carolina Panthers squad that could be playing under an interim head coach with Matt Rhule on the hot seat. The Broncos are 6-1 all-time vs. Carolina.

Baltimore may be thin at wideout, but Lamar Jackson presents a nightmare matchup for any defense. The Ravens should also be much healthier than last season when injuries derailed their 8-3 start.

Thirteen. That’s the number of consecutive losses the Broncos have suffered at the hands of the Chiefs. Can Wilson and Co. finally snap that streak?

Denver’s defense will have its hands full, stopping Arizona’s impressive wide receiver duo of DeAndre Hopkins and Marquise Brown, not to mention containing the dual-threat ability of quarterback Kyler Murray.

There is no better test to see where the Broncos stand than a matchup with the defending Super Bowl champs. If Denver is in the playoff hunt, how the Broncos perform in this Christmas Day showdown should go a long way in determining if they are a legitimate contender.

The AFC West crown could be on the line when the Broncos travel to Arrowhead Stadium on New Year’s Day.

Last season saw the Chargers and Raiders square off in a memorable Week 18 bout, with the winner securing a postseason berth. Could the Broncos find themselves in an identical situation? It would not be a shock.