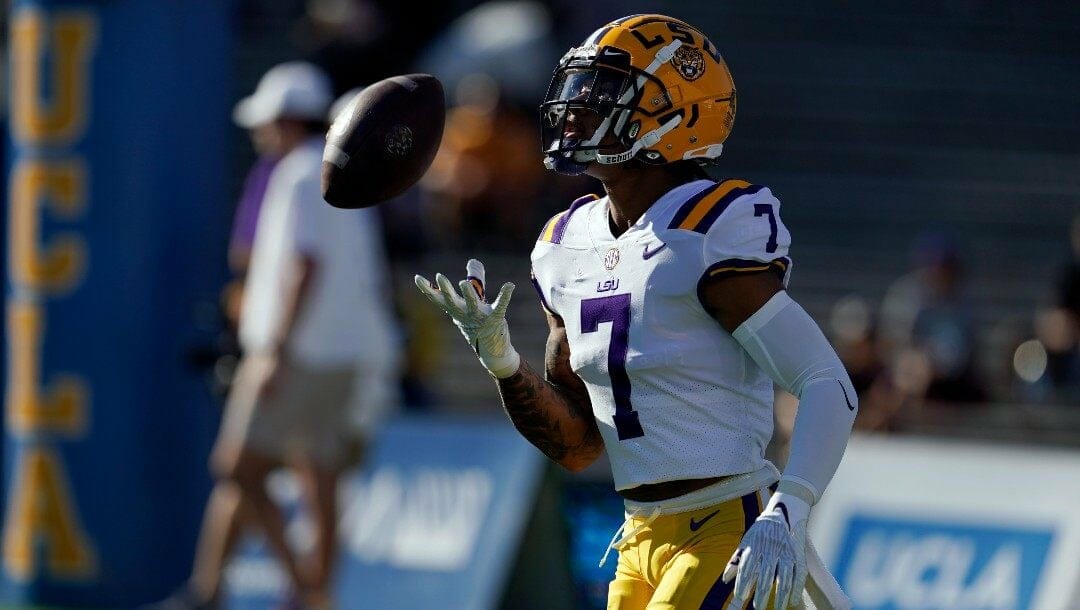 The LSU cornerback, who is among the favorites to be taken first at his position in the NFL Draft, was just a freshman playing against Georgia in the SEC championship. But Stingley performed like a veteran.

Georgia quarterback Jake Fromm launched a deep pass along the left sideline. Stingley had pushed the receiver at the line of scrimmage, preventing him from easily beginning his route. Then he trailed his opponent along the boundary.

Stingley turned his head right before the ball arrived. Smoothly, he turned his body and picked the pass off.

Stingley played against some of the best teams and receivers college football had to offer. And he appears ready to jump to the NFL.

"He's not a future superstar – he's a superstar."

He has the second-best odds to be the first cornerback selected (+275). The Over/Under for his draft position is 12.5.

Michigan defensive end Aidan Hutchinson has the leading NFL Draft betting odds to be picked first at -350 as of March 24.

The Jacksonville Jaguars have the No. 1 overall pick. They could use help at essentially every position except quarterback after selecting Trevor Lawrence last year.

This one belonged to Derek Stingley. pic.twitter.com/fD0yOtfIho

If the Jets trade back from the 10th pick with the Eagles at No. 15, New York would be a good landing spot for Stingley.

The Jets were last in defensive DVOA and pass defense a year ago, via Football Outsiders. Also, Pro Football Focus graded them 31st for defense and 30th for pass coverage.

With Hamilton at No. 4 at Stingley at No. 15, the Jets would make substantial upgrades in their defensive backfield. This would help them immensely in a division that now features Stefon Diggs of the Bills and Tyreek Hill, who was recently traded to the Dolphins.

Stingley played just three games his final year of college due to a foot injury, but he was still a two-time All-American.

Stingley arguably was most impactful in 2019, as he was LSU’s first true freshman to start every game.

He concluded the season as a consensus All-American. He helped LSU win a national championship, as the Tigers allowed just one passing touchdown in their final four games of the season.

He led the SEC and was fifth in the FBS with six interceptions. He also paced the conference and was No. 2 in the country with 21 passes defended. He added 38 tackles, one for loss.

In 2020, Stingley started seven games, missing the season opener due to illness and the final two games with an injury. But he was still an All-SEC first-teamer and First-Team All-American.

That year, he totaled 27 tackles, 2.5 for loss, while breaking up five passes. His junior season, he finished with eight tackles, 3.5 for loss, and a forced fumble.

In 2020, Stingley was the top-graded corner by PFF in coverage.

He has the potential to translate to a standout press corner. In his career, he was beaten multiple times on slants near the goal line when he should’ve taken the inside leverage. However, he’s generally excellent with his hands at the line of scrimmage and is fluid.

In that Georgia game, the Bulldogs were inside LSU’s 20 facing a third-and-12. Stingley jammed his opponent at the line, favoring the outside, but the receiver found open space toward the middle. Stingley, though, recovered to dislodge the ball from the receiver’s hands in the end zone.

Highest-graded season by an LSU defender since 2014:

Stingley can provide support on the ground. He understands pursuit angles and is capable of shedding blocks, but his tackling form is inconsistent.

Stingley often shows hustle. He has incredible quickness to close the gap between a receiver and him when the ball is in the air.

Healing from injury, he didn’t perform at the NFL Combine so teams couldn’t measure his speed. However, he’s hoping to participate in LSU’s Pro Day in April.

He showed that burst against Vanderbilt in 2020. He was lined up on the perimeter and, biting on a play fake, moved toward the middle after the snap. Quarterback Mike Wright raced to the pylon, but Stingley was a bit faster and pushed him out of bounds just in time.

At 6-foot,190 pounds with arms measured at 30 5/8 inches, Stingley has the tools to become a solid professional defender.