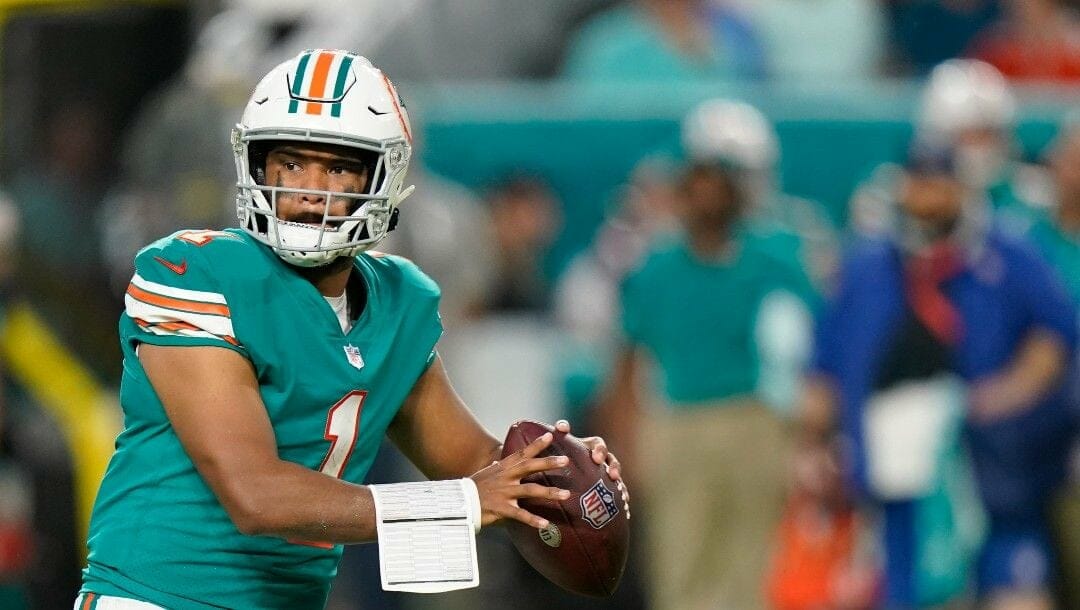 With their trade for star wide receiver Tyreek Hill and hiring head coach Mike McDaniel, the Dolphins hope they can reach the NFL playoffs this year.

Here’s a position-by-position look at the Dolphins, whose NFL odds to win the Super Bowl are +4000.

Last season, he was 18th in DVOA and DYAR and 22nd by PFF’s grades. After being drafted fifth overall out of Alabama in 2020, he was expected to perform at a higher level by now.

However, he’s in a better situation now that the Dolphins traded for Hill and Jaylen Waddle is another year older after an impressive rookie season.

The Dolphins’ running back group featuring Chase Edmonds and Raheem Mostert is ranked No. 23 for the upcoming 2022 NFL season, with an overall grade of 57/100.

Edmonds, with the Cardinals last season, wasn’t a primary option for the entirety of the 2021 season, but he was effective. He was eighth in DVOA and 17th in DYAR.

However, he’s likely in the same position with the Dolphins. Mostert joins the team after moments of greatness with the 49ers.

The Dolphins’ wide receiver and tight end group featuring Tyreek Hill and Jaylen Waddle is ranked No. 8 for the upcoming 2022 NFL season, with an overall grade of 89/100.

Hill was among several superstar receivers to trade teams this offseason. He was seventh in DYAR and 24th in DVOA, as he was third in the NFL with 111 catches and seventh with 1,239 yards to go with nine touchdowns.

Waddle was dazzling as a rookie. He was 16th in the NFL with 1,131 effective yards. Mike Gesicki was sixth among tight ends in 2021 with 73 catches and ninth with 780 yards. Miami also added former Cowboys wideout Cedrick Wilson Jr.

But they did pick up Terron Armstead, who was PFF’s 27th-highest tackle in 2021 after playing eight games. Connor Williams, the 10th-best guard for the Cowboys last season, is projected as the Dolphins’ center.

2021 #Dolphins stats: Tua Tagovailoa led the league in aggressiveness @NextGenStats and was 4th in turnover worthy play rate among QBs who had 20% of the most snaps in the NFL @PFF

The Dolphins had the seventh-best run defense in PFF’s grades and 14th-best pass rush. Their adjusted sack rate was even better at fourth, while their adjusted line yards were 16th.

In PFF’s grades, Christian Wilkins was sixth among interior defensive linemen, and Emmanuel Ogbah was 20th among edge rushers. Miami also provided a spark to its pass rush with Melvin Ingram III, 14th in PFF’s edge grades, and some linebacker depth through the draft.

Xavien Howard was a Pro Bowler the last two seasons and an All-Pro in 2020. Opposite him, time will tell if Byron Jones will be ready for Week 1 following offseason surgery.